Malyk Bonnet did a very brave thing: He listened to his gut. 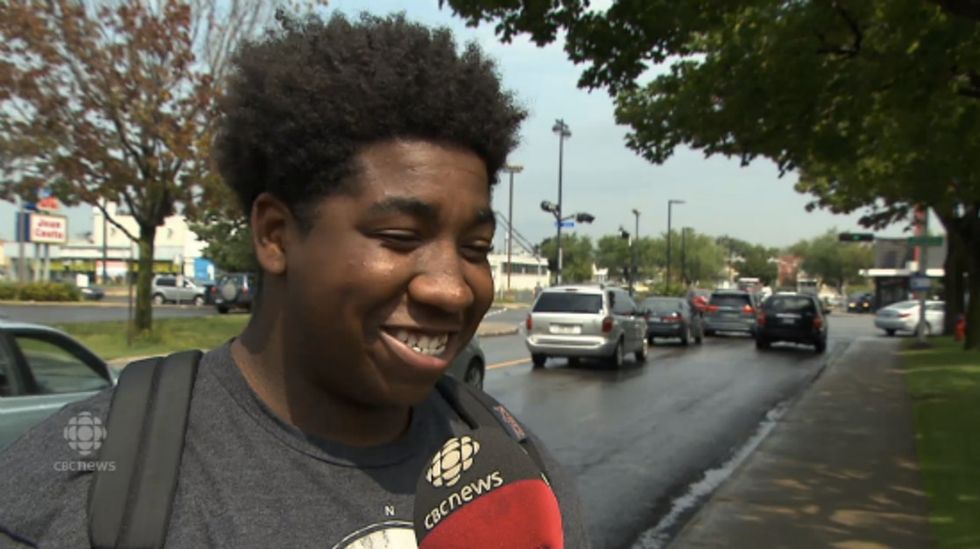 This article originally appeared on 08.20.15

You've probably been there. You're out and about and you see something that just feels ... off.

Our gut tells us to speak up, to ask questions, to tell someone. But often, we don't.

This happened to Malyk Bonnet, a 17-year-old from Montreal, on Aug. 1, 2015. But instead of ignoring his instincts, he acted brilliantly. It may have saved a woman's life.

Bonnet had been having a relatively normal day until he spotted something suspicious on his way home.

He'd been waiting for the bus after a shift at the restaurant where he works when he saw a man and woman arguing. He sensed a red flag.

"The guy was screaming at her, the girl," Bonnet told CBC News. "He wasn't really gentle with her, and I started watching, because I thought he would hit her, so I approached them a little bit."

The pair asked Bonnet if he could lend them bus fares to nearby Laval, a city about 25 miles away from downtown Montreal.

Bonnet felt uneasy about what was happening. But instead of declining, he decided to get more involved. He helped the man and woman with their fares and told them he was also traveling to Laval (which was not the case).

"My plan was to keep them in a public place where he wouldn't hurt her," Bonnet told Dateline NBC. "I decided to be friendly with the man and have him think I was his friend. I played my game and he seemed to trust me."

After arriving in Laval, Bonnet suggested they grab a bite to eat. At the restaurant, he gave the pair $50 for food and excused himself to use the restroom. Finally having the opportunity, he called the police and told them "someone had been kidnapped." Officers arrived minutes later.

What Bonnet hadn't known at the time was that police were already looking for the perpetrator and his victim.

"We were looking for a 29-year-old woman who was kidnapped by her former boyfriend earlier that day," Laval police Lt. Daniel Guérin told CBC News. "We believed that man was very dangerous."

Previously, the abuser spent time behind bars for assaulting his ex and sending her death threats.

Bonnet told Dateline NBC that while he didn't speak with the woman after police arrived, he could see how relieved she was. "We made eye contact and she had tears in her eyes. She was really happy."

Unfortunately, this type of tragic experience isn't all that rare.

While this particular story unfolded in Canada — where roughly half of women have experienced at least one incident of sexual or physical violence since the age of 16 — you'll find similarly alarming statistics in the U.S.

1 out of 4 American women will experience domestic violence in her lifetime. What's more, female victims of homicide are far more likely than male victims to be killed by a current or former partner.

Although it may seem easy to simply leave an abusive relationship in the dust, take it from some women who've been there — it's much more difficult than it seems from the outside looking in.

Instead of passing judgment, you can learn more about how you can help friends and family members who may be experiencing domestic abuse.

Bonnet has become a local hero for his selflessness.

"His quick actions may have saved this young woman's life," Guérin said. The officers made sure to collect money so Bonnet could be reimbursed for the bus fares and food he purchased while trying to save the victim. "He now has 500 new friends in our department."

Thank you, Malyk, for reminding me that sometimes the bravest thing I can do is simply listen to that voice when it's trying to get my attention.

Actress Julia Fox shares a tour of her cluttered NYC apartment, and it's a relatable mess

"Hopefully, somebody watches this and thinks, ‘Well, OK, maybe I’m not doing so bad.’”

Julia Fox taking viewers on a tour of her apartment in New York.

To live in a perfectly curated, always tidy, Marie Kondo-worthy home might be a lovely fantasy. But for many, dare I say most of us, that is simply not a reality. There just aren’t enough hours in the day or helpful hands in the house to keep it from getting messy multiple times a week. Square that by a million if the home has small kiddos in it. And if there’s only one parent to clean up after those small kiddos? Forget about it.

That’s why people are letting out a huge sigh of relief after getting a video tour of Julia Fox’s New York apartment in all its glorious disarray.

The actress and model is often seen wearing bold, high-end fashion pieces at glamorous events like the Met Gala,

but her home is anything but glamorous.