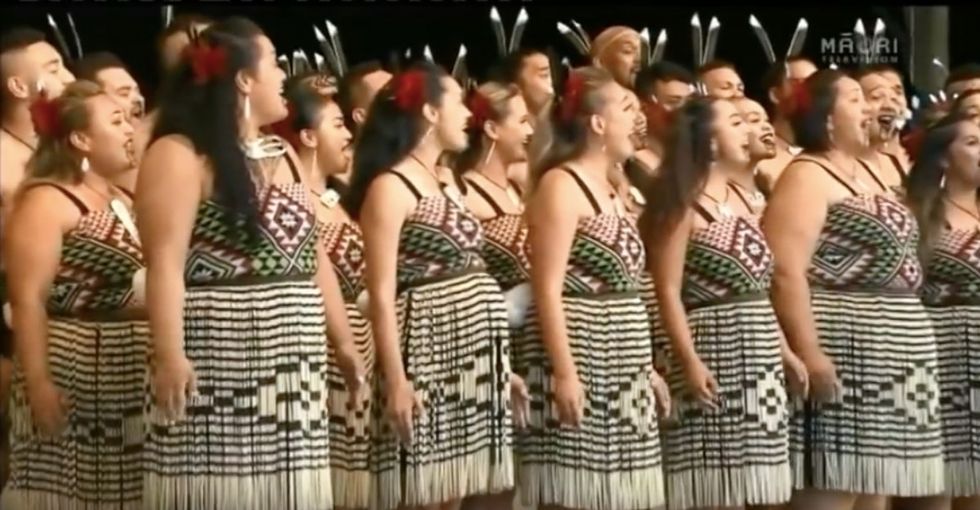 This article originally appeared on 03.01.19

Queen's Bohemian Rhapsody has been covered dozens of different ways. But you've never seen it performed like this.

As one of the most iconic songs in rock music, Bohemian Rhapsody is recognizable no matter how it's done. As children, my brother and I used to belt out Galileos and Figaros in the backseat of our parents' Volkswagon whenever the song came on (yes, just like in Wayne's World). While other kids learned about Beelzebub in Sunday School, I learned about him from Queen's perfect harmonies. If there were an anthem from my classic rock-filled childhood, it would be Bohemian Rhapsody.

It's one of those songs that is hard to cover well, though it hasn't stopped people from trying. I've enjoyed some renditions, but nothing has caught my attention or delight more than this kapa haka version from New Zealand.

A Māori choir in native garb sang the song live in the Māori language, and it is something to see.

The group Hātea Kapa Haka performed the song on February 21 at New Zealand's national kapa haka festival, Te Matatini, in Wellington. The festival brings 46 kapa haka (Māori performing arts) groups together to compete against one another.

Newshub reports that Hātea Kapa Haka collaborated with musical artist William Waiirua to create a "Bohemian Rhapsody" cover in the Māori language, both as a tribute to Freddie Mercury and to celebrate the Oscar-nominated movie about his life.

The group had previously created a music video for their cover, but seeing it performed live is something else. The voices, the harmony, the presentation—everything—is wonderful.

This kind of cultural mashup reminds us how small our world has become.

The contrast between Queen's 1970s British rock and the Māori people's traditional kapa haka could not be more striking. And yet, the melding of the two totally works. Music has the power to bring people together, and this performance is a great example of how it can bridge cultures with beautiful results.

And if you want more, check out the music video too:

William Waiirua got more help from Hātea Kapa Haka than he bargained for when his car broke down... For more Queen, check out this playlist: https://umusicNZ...
From Your Site Articles
queen
Health

Keep ReadingShow less
culture
Get stories worth sharing delivered to your inbox
By signing up you agree to Upworthy's privacy policy.
Trending Stories
Joy