Think you're born with all your brainpower? This theory will make you think again.

'Students are now aware of the idea that the more you learn, the more your brain will grow.' 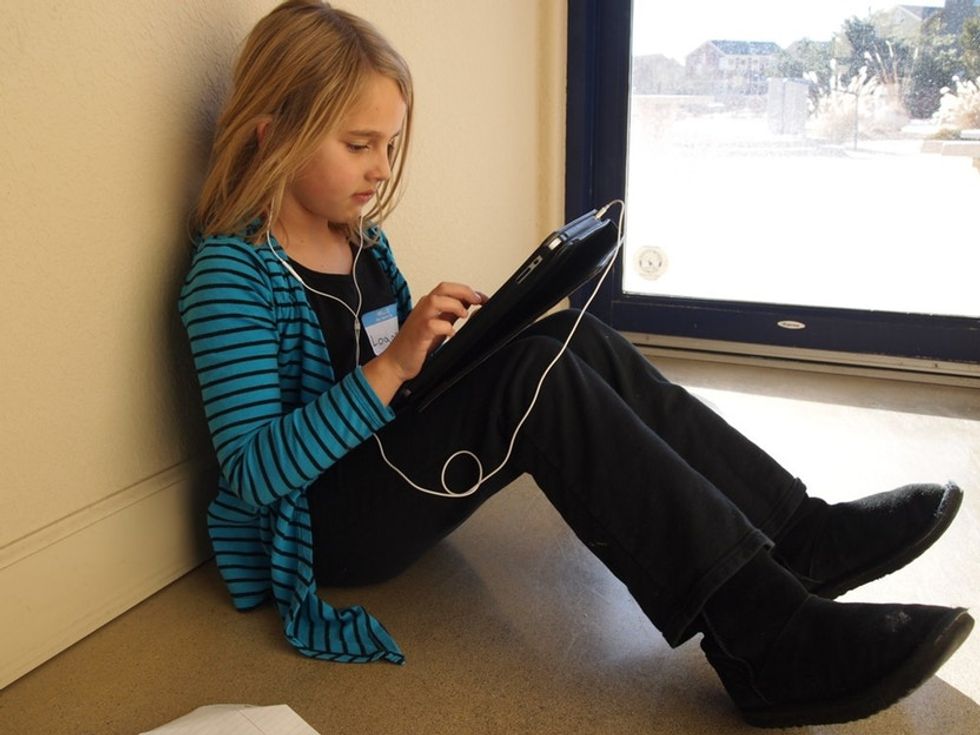 Do you think you're born with all the smarts you'll ever have or that you can get smarter over time?

It may sound like a silly question, but many kids aren't aware of the power of their own brains.

This was especially true of Griselda Rutherford's students. In her 20 years of teaching in the District of Columbia Public School System, she'd often have a tough time getting them on board the learning train.

She noticed many students seemed to feel defeated before even starting a task. They weren't willing to take risks during lessons and assignments and were afraid to ask questions. Sometimes they wouldn't even answer her questions for fear of being wrong. It's as if they were terrified of failure, and as a result, their progress in class slowed to a crawl.

Then, in 2013, Rutherford's district started implementing a teaching technique called the "Mindset Method." It changed everything.

Teacher and students working in the Mindset program. All photos via MindsetWorks.

The Mindset Method was developed by Carol Dweck, a professor of psychology at Stanford University, and her colleagues. Researchers and education experts like Angela Duckworth and others have added to the body of knowledge over the last two decades to support these theories.

The theories explain that learners think about their abilities in two ways: as a fixed mindset or a growth mindset

People with a fixed mindset think how smart they are is set in stone and that time and effort won't really change much. On the other hand, people with a growth mindset think the brains they were born with are just the beginning, and hard work can improve them. Growth mindset learners are more willing to take on challenges, see failures as an opportunity to learn and persist to overcome obstacles rather than giving up.

In order to prove this theory, Rutherford began working with schools to help teachers apply methods of fostering growth mindsets to their classrooms. The basic teaching principle was to encourage and reward effort rather than just praise achievement.

Teachers also had access to Brainology, a computer program that showed students how their brains were like muscles that strengthen with regular exercise. Through interactive animation and prompted activities, students learn how simple it is to grow and improve their brains. This helps them gain confidence in their abilities, which makes them want to take on more challenges and reach higher levels in the classroom.

Slowly but surely, Rutherford began noticing her students were gaining confidence. And lo and behold, their schoolwork also improved.

A student uses the Brainology program.

"The program helped them to identify what a growth mindset looks like," Rutherford writes in an email. "Students are now aware of the idea that the more you learn, the more your brain will grow."

The program also encourages students to be responsible for their own learning and self-monitor their mindset growth. Rutherford actually noticed one of her students doing just that during a class assessment when he asked her for another sheet of paper.

"I saw him write some words on the blank paper and then place a big X on the words," writes Rutherford. "He explained to me he was using the test stress reliever strategies he learned in Brainology." He was crossing out negative words and replacing them with positive ones, which helps knock out defeating thoughts.

The positive effects of encouraging a growth mindset can also be seen across the board in testing scores.

A teacher helpsf students with an assignment.

Similar improvements were seen in a case study performed at Fiske Elementary School in Massachusetts. They saw a 75.5% growth in state comprehensive test scores in math after a year on the Mindset Method. That's one heck of a jump!

However, it's not just about the students' growth. The teachers working within the Mindset Method program are changing for the better too.

Teachers do a Mindset Method exercise.

Rutherford, for example, learned how important it was to praise her students for their efforts rather than just tell them they're smart.

"This type of praise empowers all students to take risks and allows them to understand it’s OK to make mistakes," explains Rutherford.

If giving an "A" for effort becomes a real thing in every classroom, it could give so many more kids the chance to reach their full potential.

By constantly repeating the idea that intelligence is not fixed and limitless growth is possible with extra effort and dedication, teachers are giving confidence back to kids. And confidence is the foundation upon which true greatness is built.