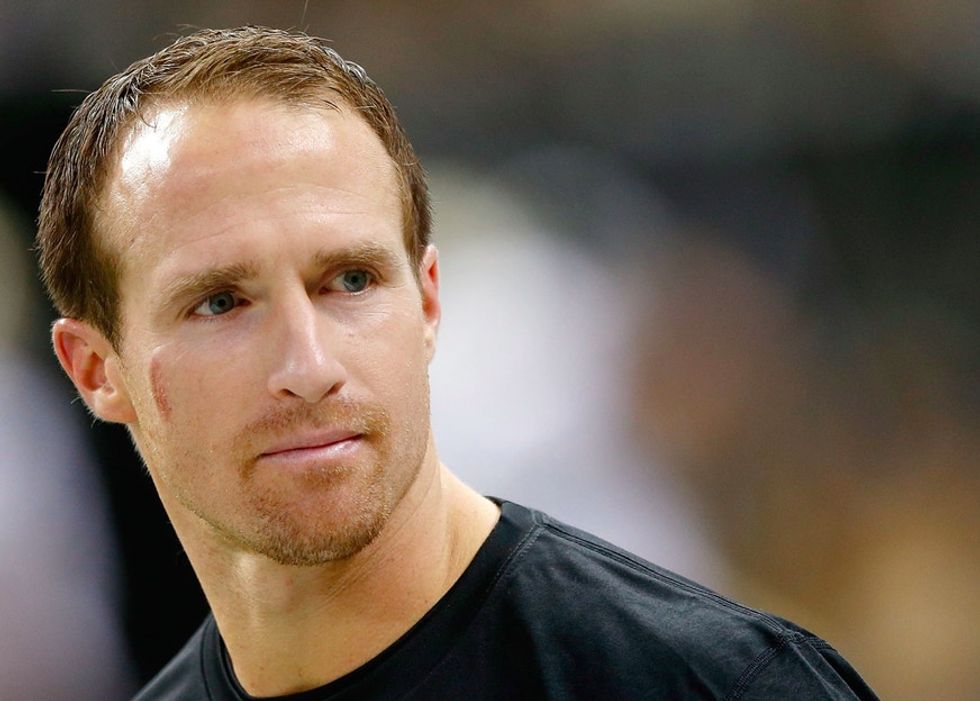 There it is. Clear as day.

Still, it can be hard for people to wrap their heads around a celebrity having such a glaringly obvious "imperfection." The first time Oprah met Drew in person, she thought his birthmark was a lipstick smudge and tried to wipe it off.

Drew has been selected to nine Pro Bowls, led the league in passing yards five times, and, of course, was named MVP of Super Bowl XLIV in 2010.

Before he was a Super Bowl-winning quarterback, though, he was just a kid who got made fun of for being different.

"Because of my birthmark, which I was obviously born with, I got all kinds of comments when I was a kid, about 'Wipe that whatever off your face.' ... All kinds of names. People would call me 'Spot,'" Drew told CNN.

When he grew up and found his way to fame and fortune, he had a choice: have the birthmark removed or use it to send a message.

Drew Brees has, to put it bluntly ... a lot of freaking money. He's currently in year four of a five-year, $100 million deal and will likely cash in again with an even bigger contract before his career comes to an end.

There's no question he could pay for the plastic surgery to have that birthmark removed for good and have plenty of money leftover to enjoy his recovery in a five-star resort on Neptune, if he wanted.

But for Drew, this option never even crossed his mind.

In his book, "Coming Back Stronger," he writes: "Instead of seeing it as a bad thing, I chose to see it as something that made me unique and special. It set me apart from everyone else. ... Now it's just a part of who I am. I wouldn't consider cutting off my arm. Neither would I cut off my birthmark."

As his career blossomed, Drew began using his platform to tell kids like him that they don't need to be ashamed of who they are.

"There's lots of kids that may have something that somebody is going to make fun of. Their name, the way they look, the way they talk, the way they laugh. And it's so unfair, but it's reality," he said during his interview with CNN.

And in 2010, he teamed up with the It Gets Better movement to put out a message.

Life is pretty good as one of the NFL's top players. But every time Drew takes the field, he's showing kids all over the world that being different is good — and not only will it not hold you back from achieving whatever you want, it might even help you get there.

And as for whether he'll ever change his mind and have the mark removed?

He told TMZ, "As long as there's no health issues with it, then it stays."

Right on, Drew. Right on.

Here's Drew on CNN talking about the birthmark, dealing with his bullies, and how he used it as motivation to become great: