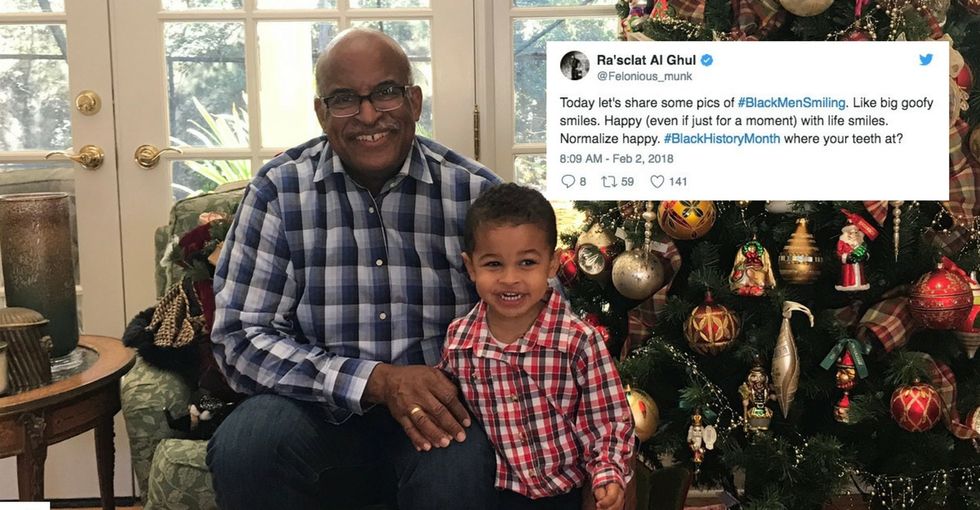 When we see black men represented in TV or films, they're often angry, stern — or even worse — completely emotionless.

We rarely get to see black characters experience emotional arcs that include joy, spontaneity, or anything resembling a care-free moment.

But in reality, we know that's not true. Black men are just as dynamic, hopeful, fun-loving, and happy as the rest of us. They just don't always get the space or opportunity to share those dimensions of their humanity with the world — until now.

The hashtag, #BlackMenSmiling, is the perfect antidote to representations of black men as long-suffering, mean, or cold.

The trend began after a simple request from from comedian @Felonious_Munk.

Black men came through with beautiful selfies and carefree moments with friends and family. Women chimed in too, sharing pics of the joyful men and boys in their lives, and the occasional picture of President Barack Obama and Prince too. (Why not?) The results are so simple, and yet so powerful.

1. Black men stepped up to challenge stereotypes and push back on tired tropes.

2. And improve their corner of the internet, not just for themselves, but for their kids too.

3. Some of the best submissions came from men who don't usually smile for pictures, but put themselves out there to participate.

4. And the fellas with those perfectly imperfect smiles joined in too.

5. A few men have been waiting on this hashtag for years.

They were born ready!

6. For some, it took a little digging to find a photo with a smile.

Which is only motivation to smile more.

7. Because there's so much for black men to smile about.

9. ... to the little things that make an ordinary day extraordinary.

10. This hashtag is a celebration of black men.

11. And a beautiful portrait of the well-rounded, joyful, people we know and love.

#BlackMenSmiling is more than a throwaway hashtag, it's an act of resistance.

It often feels like we live in a country that doesn't want to see black men healthy, successful, and happy. They're considered a threat when they're driving in cars, walking into their own homes, or even playing outside. It would be easy to shut down, to be mad at the world. But they don't.

So every grin, every toothy smile, every bright eye and cheerful dimple is an act of resistance. You can't dim a black man's shine. You cannot tame his spirit or claim his joy. Not today, not ever.

And sometimes, you just need a hashtag to remind the world of that.