The artists painting the Obamas post-presidency portraits are incredible. 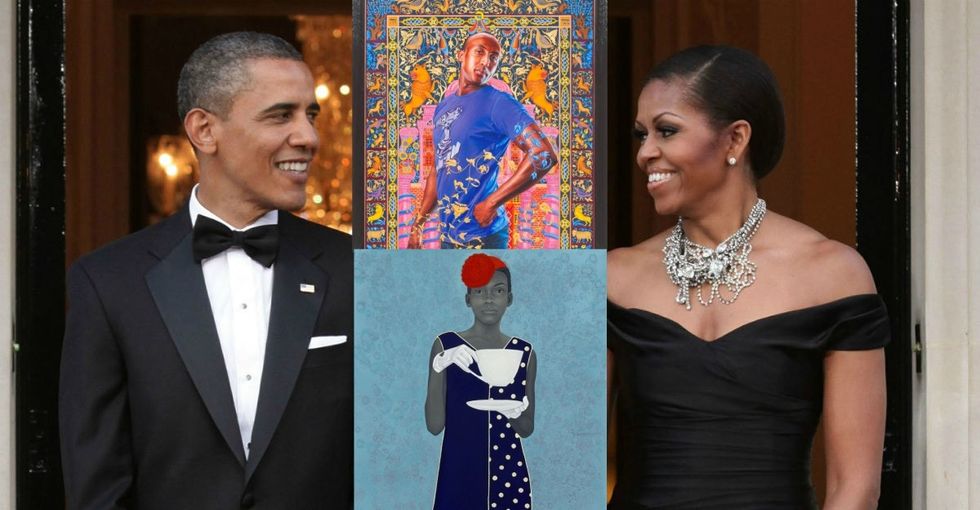 After each presidency, the Smithsonian’s National Portrait Gallery and the White House commission portraits of the former commander in chief and first lady.

Prints of the portraits are then given to the gallery and White House.

This year, of course, it's the Obamas' turn.

On Oct. 13, the Smithsonian announced that artists had been selected to paint the 44th president and first lady in portraits set to be unveiled in early 2018.

Kehinde Wiley, who will paint Barack Obama, and Amy Sherald, who will paint Michelle Obama, are the first black artists to paint a president and first lady for the occasion.

It might seem obvious, given he won over Mr. Obama, but it can't be stressed enough: Wiley is very, very good at what he does.

Thelma Golden with Kehinde at the Brooklyn Museum exhibition of An Economy of Grace. Now on view til May 24. #Brooklynmuseum #kehindewiley #thelmagolden #aneconomyofgrace

Wiley is a standout in the art world for his vibrant depictions of black life and culture.

"Wiley’s signature portraits of everyday men and women riff on specific paintings by Old Masters, replacing the European aristocrats depicted in those paintings with contemporary black subjects, drawing attention to the absence of African-Americans from historical and cultural narratives," the Brooklyn Museum once described his work.

From my exhibition "An Economy of Grace" Mrs. Waldorf Astor 2012 oil on linen 72"x60" featuring Shantavia Beale. The original documentary on this project can be seen now on pbs.org #kehindewiley #contemporaryart #seankelleygallery #brooklynmuseum #grace #aneconomyofgrace

As Wiley explained to HuffPost:

"Many people see my early work simply as portraits of black and brown people. Really, it’s an investigation of how we see those people and how they have been perceived over time. The performance of black American identity feels very different from actually living in a black body. There’s a dissonance between inside and outside.”

Wiley is also openly gay, a part of his identity that he often reflects in his work.

The former president's choice to select an openly gay artist is meaningful — but not necessarily surprising.

Obama was the first sitting president to embrace same-sex marriage and led the country toward unprecedented progress on LGBTQ rights throughout his tenure in office.

All in all, it seems like Wiley is the perfect fit for the job.

Work in progress. Oil study on linen for a Nigeria series of portraits. 📸 @bradogbonna

Sherald, too, is a quickly rising star in the art realm.

Like her husband, Mrs. Obama handpicked the Baltimore-based artist, whose work predominantly focuses on challenging stereotypes that confine African-Americans and explores black identity.

New works-“ What’s precious inside of him doesn’t care to be known in the mind of those that diminish its presence. “(All American) Oil on Canvas @ Monique Meloche LES March 3-5 2017 #armoryweek 2 Rivington St. NY, NY

“We get the same stories of who we are ― stories filled with pain, oppression, and struggle,” Sherald explained to Huffington Post of her work.

“But there are other sides to black lives that are not often represented. I’m painting these people.”

Her work, seen below, rose to the top out of more than 2,500 entries, the Smithsonian noted.

Having two black artists paint the first black couple in the White House is just as huge as it seems.

Given the deep-seated racism captured in American art throughout the centuries — where people of color were often solely depicted as slaves or exotic novelties created by white artists — Wiley and Sherald are helping to break artistic and political barriers that have stood in place since our country's founding.

“Both [Wiley and Sherald] have achieved enormous success as artists," Kim Sajet, director of the National Portrait Gallery, said in a statement. "But even more, they make art that reflects the power and potential of portraiture in the 21st century."

Who else can't wait to see these portraits next year?