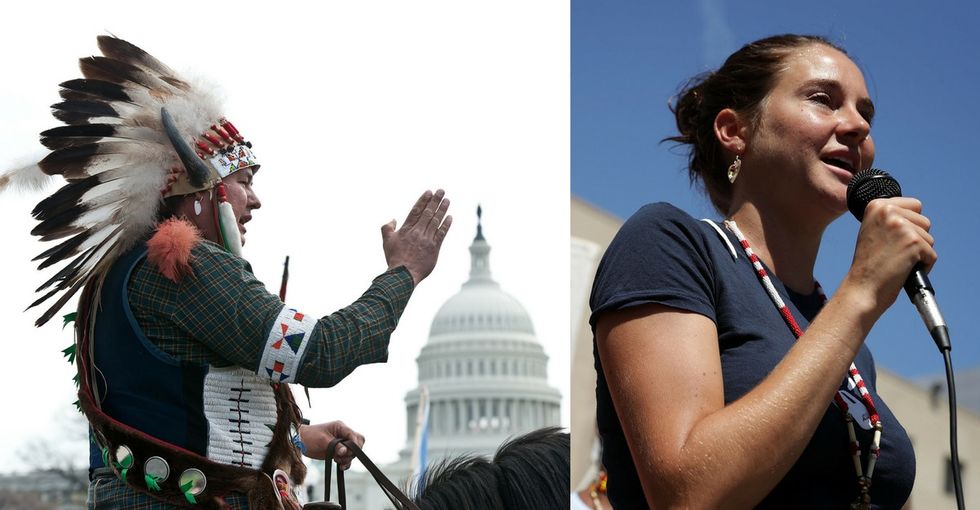 Columbus Day has always been a bit ... contentious in the U.S.

In elementary school, most of us learned about Columbus as the man who discovered America. By middle school, we learned that he actually went to South America and the Caribbean. And also there were already people living there.

Then in high school, we might have learned the truth: Columbus had nothing to do with the United States at all ... and also he raped and pillaged lots of indigenous peoples.

Our country's relationship with its native inhabitants has been complicated from the beginning.

In fact, you could call it downright awful. Inhumane. Genocidal. To this day, Native American communities continue to suffer from poverty and police brutality at alarming rates.

And this year, on Columbus Day, three things happened that proved how complicated all of this continues to be.

1. 524 years after Columbus "discovered" the "New World," actress Shailene Woodley and a bunch of other activists were arrested in North Dakota for protesting to protect Native American rights.

The situation began earlier this year, when Energy Transfer Partners began construction on the Dakota Access Pipeline, a $3.7-billion project that would threaten the water supply that serves more than 9,000 Native Americans.

The Standing Rock Sioux and other tribes appealed to numerous government departments and courts to halt the project. But despite a few temporary rulings, the conflict continued.

The company behind the pipeline bullied their way through thousands of Native American protesters and clandestinely destroyed the same sacred lands and burial sites that the tribes had hoped to protect.

Over the weekend, Energy Transfer Partners denied another request from the U.S. Justice Department to voluntarily stop construction.

Once again, the tribes gathered in protest, leading to the arrests of more than two dozen people on Oct. 10, including actress Shailene Woodley.

Woodley broadcast her arrest over Facebook Live, and while that publicity didn't keep her out of jail, it did help to raise awareness about the unfair ways which Native Americans continue to suffer.

Native American communities have been largely ignored, which has only made it easier for the U.S. government and corporations alike to get away with egregious mistreatments, like what's happening in North Dakota.

Less than half of the country actually recognizes Columbus Day to begin with, which is a good step forward.

Over the last 25 years, communities across the country have started to use the holiday to celebrate the oft-ignored heritage of the country's indigenous inhabitants, instead of a man who did them harm. South Dakota was the first full state to replace the holiday with Native Americans Day back in 1990, with Vermont joining the charge just this past year.

"Indigenous Peoples Day represents a shift in consciousness," said Leo Killsback, a citizen of the Northern Cheyenne Nation and assistant professor of American Indian studies at Arizona State University, in an interview with CNN. "It acknowledges that indigenous peoples and their voices are important in today's conversations."

3. The U.S. government also recently paid out nearly $500 million to 17 native tribes in a long-overdue settlement over property rights.

While European settlers took a lot of North American territories by force, the U.S. Department of Interior did enter into legal treaties with native tribes for the use of almost 56 million acres of land. Rather than selling the property outright, however, the tribes freely gave up the land, agreeing instead to take "just compensation" for whatever profits were made from the businesses and tenants that made use of it, including housing, timber harvesting, farming, livestock grazing, and oil and gas extractions.

Unfortunately, the U.S. government didn't do a very good job of managing the land resources or the money that was made from them. (And this is hardly the only example of U.S. interests ignoring legally-binding contracts with Native Americans.)

Since President Obama took office, though, nearly 100 lawsuits and billions of dollars have been settled between the government and Native American tribes — some of which dated back more than a century and had gone ignored all that time.

This might sound like some generous progress, but it's also something that the tribes have been legally owed for a long, long time. It's a tiny step forward.

This year, Columbus Day reminded me of just how far we've come in terms of respecting our indigenous brethren — and how far we still need to go.

We've taken two steps forward recently by paying back the Native Americans and beginning to abolish a problematic holiday. But we've also taken one giant step back by allowing corporations to destroy sacred Native American land, just to build an oil pipeline.

The good news is that social media is a powerful tool for change. Now that people are paying attention to their plight and the celebration of their culture is spreading, we might start to see some actual change.

We can't undo the damage we've already done nor can we change the fact that we've refused to make up for our mistakes so far.

But if we want to do what's right and build a brighter future for all the people who live in the United States, there's no better time to start than now.