This viral tweet from Serena Williams shows just what a shared experience parenting is. 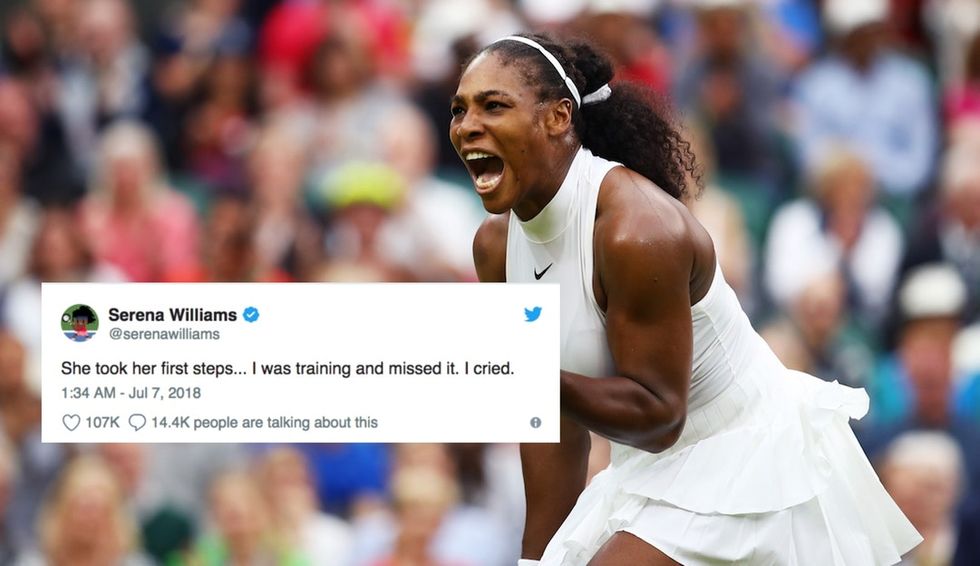 Serena Williams always keeps it real about being a mom.

The tennis great kills it on the court, but she's also been brutally honest about what it's like to raise a child, detailing both the scary (as she experienced complications after childbirth) and rewarding moments of becoming a mother.

Her honesty has led other women to come out about their own struggles too.

In July, Williams got real once again, sharing one of the tough realities of being a parent.

Williams, who just returned to the courts in May, opened up on Twitter that she'd missed one of daughter Alexis Olympia's major milestones while at Wimbledon.

Missing those big moments is something a lot of parents experience — and many chimed in with words of support.

Alison Bender, a soccer presenter who was at the World Cup at the time, shared that she had to watch her little one take their first steps via video.

Chrissy Teigen, mother of all social media, picked up her scepter of truth to offer Williams a positive way to reframe it.

And journalist Raakhee Mirchandani weighed in, so that Williams knew that all the effort she was putting in on the court was inspiring her daughter's future.

Thousands upon thousands of people responded to Williams, offering words of encouragement — "She missed you winning 23 grand slam titles but will still know you’re the best tennis player of all time" — dropping truth bombs (it's just not the parents who experience those milestone moments), and even sharing some of the hilarious lengths people have gone to in attempts to "postpone" major moments until a parent can see.

My best friend was babysitting my daughter while I was at work. When she got up and went to take a step my friend p… https://t.co/dTpFtdntRJ
— George (@George)1531038810.0

Williams is at the top of her game. That's why sharing her struggles has such an impact.

There's no such thing as a "perfect" parent. Serena Williams' honesty and #RealTalk — both in good and more difficult times — pushes the conversation forward, creating an environment that encourages parents to speak out and support one another.

Parenting is hard. Balancing that with work can feel, as Williams notes, impossible. Sacrifices have to be made. But it doesn't mean the feelings they create have to be silent.