She was lucky. Many others aren't, but we can fix that. 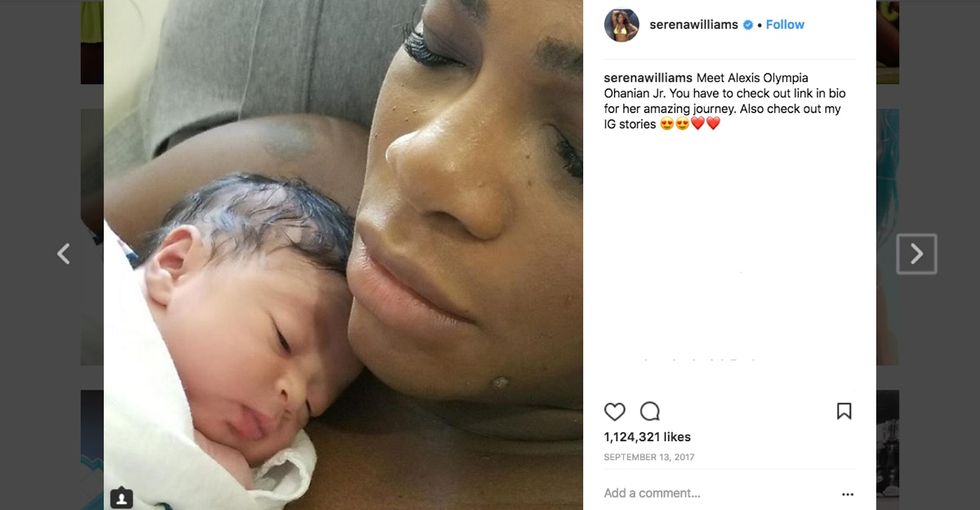 In a new blog post, tennis superstar Serena Williams opened up about how she almost died after giving birth.

"I almost died after giving birth to my daughter, Olympia," she writes. "Yet I consider myself fortunate."

Williams explains that after giving birth, she had a pulmonary embolism, or blocked arteries in her lungs. This caused her to cough, violently, tearing open the newly-stitched C-section wound. Doctors discovered blood clots in her abdomen, but were able to treat her in time to save her life. It was the type of experience you wouldn't expect of a wealthy world-class athlete like Williams, but her experience speaks to just how common these sorts of complications can be — and just how lucky she is to have survived.

Meet Alexis Olympia Ohanian Jr. You have to check out link in bio for her amazing journey. Also check out my IG stories 😍😍❤️❤️

Infant and maternal mortality is an issue that doesn't get talked about nearly enough. Williams wants to change that.

"According to the Centers for Disease Control and Prevention, black women in the United States are over three times more likely to die from pregnancy or childbirth-related causes," she writes. "But this is not just a challenge in the United States. Around the world, thousands of women struggle to give birth in the poorest countries. When they have complications like mine, there are often no drugs, health facilities or doctors to save them. If they don't want to give birth at home, they have to travel great distances at the height of pregnancy. Before they even bring a new life into this world, the cards are already stacked against them."

Williams is right. According to the CDC, black women face a maternal mortality rate of 44 deaths for every 100,000 live births. Compared to the rate for white women (13 deaths per 100,000 births) or women of other races (14 deaths per 100,000 births), the black maternal mortality rate sticks out. A 2017 NPR/Propublica investigation into that disparity found that a number of factors, such as income and unconscious bias, likely play some role but other unknown factors remain.

Infant and child mortality rates remain higher in the U.S. than other wealthy countries, due in part to the country's distinction as one of the only not to guarantee health care to its citizens.

Just how I look at her

There are things we can do to better protect the health of mothers and their newborns around the world, but we need to acknowledge the issue first.

Williams goes on to share the story of a woman named Mary from Malawi. Mary's baby died shortly after birth. Every year, 2,600 babies will die within 24 hours of birth; 2.6 million won't make it through their first month. UNICEF estimates that more than 80% of these early deaths are preventable, so why don't we do more about it?

"We know simple solutions exist, like access to midwives and functional health facilities, along with breastfeeding, skin-to-skin contact, clean water, basic drugs and good nutrition," Williams writes. "Yet we are not doing our part. We are not rising to the challenge to help the women of the world."

"Mary's baby died because there weren't enough doctors or nurses to save him. This is a chronic problem plaguing the most impoverished countries. But what if we lived in a world where there were enough birth attendants? Where there was no shortage of access to health facilities nearby? Where lifesaving drugs and clean water were easily available to all? Where midwives could help and advise mothers after birth? What if we lived in a world where every mother and newborn could receive affordable health care and thrive in life?That world is possible. And we must dare to dream it for every black woman, for every woman in Malawi, and for every mother out there."

Thankfully, both Williams and her daughter are healthy and prepared for bright futures. Let's all do our part to make that a reality for more new moms and their children.

Williams closes her essay by calling on readers to "demand governments, businesses and health care providers do more to save these precious lives" and to support groups like UNICEF in their efforts to reduce infant and maternal mortality around the world.