Rio has a brilliant plan for what to do with its Olympic arenas after closing ceremonies.

From schools to public parks to swimming centers, Olympic venues will live on. 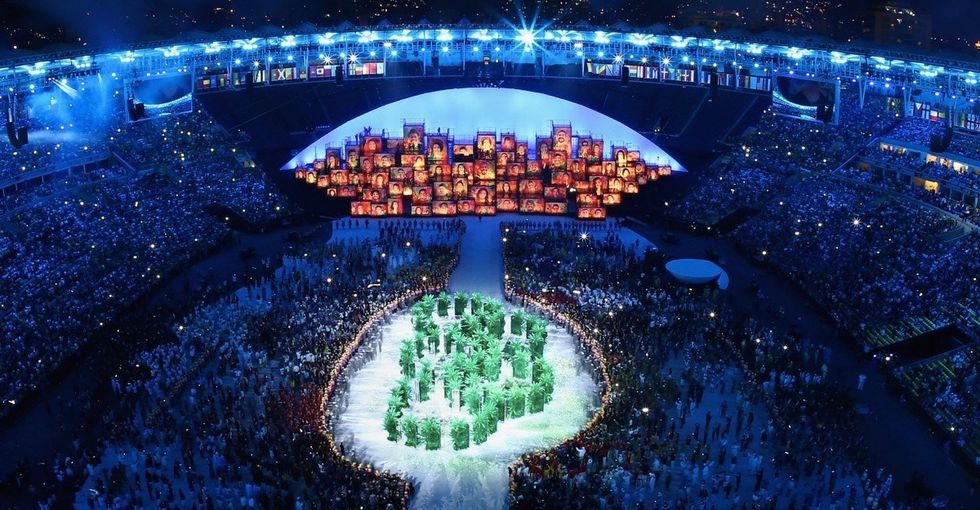 Although Rio was not without its many controversies in the lead-up to the games, things seem to have gone fairly smoothly for the Olympic host city during the event itself. Sure, the attendance hasn't been so great, and Olympic swimmer Ryan Lochte may or may not (OK, almost certainly not) have been robbed at gunpoint.

In the end, it turned out OK. Lots of great stories emerged from the games, such as Olympic firsts for Fiji and Kosovo, a beautiful display of sportsmanship, the dominance of the U.S. women's gymnastics team, a woman who helped send an Olympic dad to Rio, the joy of victory, and so much more.

The opening ceremony of the Rio 2016 Olympic Games. Photo by Pedro Ugarte/AFP/Getty Images.

But with the Olympics coming to an end, one big question remains: What will happen to all the facilities built for the games?

In 2009, when Rio de Janeiro beat out Chicago, Madrid, and Tokyo for hosting rights to the 2016 games, it estimated total costs directly related to the Olympics would be roughly $3 billion. As of the opening ceremonies, the actual cost exceeded that estimate by more than 50%, racking up $4.6 billion.

Overruns are common for Olympic host cities, but there's another problem: Most cities don't have an especially great track record of using stadiums and other Olympic-specific structures after the festivities have ended.

In 2004, Athens hosted the Olympics at a price of nearly $15 billion. During the games, things looked great. But after the games? Not so much.

The opening ceremony at the Athens Olympic Games in 2004. Photo by Jean-Philippe Ksiazek//AFP/Getty Images.

Years later, the once-beautiful Olympic grounds have been largely abandoned, and the country fell into a severe depression.

Similarly, Beijing, host of the 2008 Olympics, failed to find a post-games use for certain venues. The Beijing BMX track, baseball fields, and its rowing and kayaking centers have all gone largely ignored in the eight years after the Olympics.

Hoping to avoid a repeat of Athens, Olympics organizers have big plans for the Rio facilities after the flame goes out.

During the games, the 12,000-seat Arena of the Future played host to the world's top handball players. After the Paralympics are finished with it (the location will serve as the venue for goalball), it will be broken down and rebuilt as classrooms that will house up to 2,000 students.

Similarly, the Aquatics Stadium will be disassembled and rebuilt as two separate public sports centers complete with their own Olympic-sized swimming pools.

“These are the Games of transformation that will transform the city and leave a legacy, such as mobility,” Municipal Olympic Company President Joaquim Monteiro said in a statement. "We're not preparing Rio for the Games, we are transforming the city of Rio.”

Wired reports that everything from the broadcast center's steel frame to the Olympic Tennis Center to the souvenir shop will be repurposed into various post-Olympic facilities to benefit Rio in years to come. Additionally, engineering firm Aecom plans to transform the Olympic grounds into public parks.

The Olympic park in July. Photo by Vanderlei Almeida/AFP/Getty Images.

Great news, right? Sounds like hosting the Olympics is a pretty solid investment in your own city, right?

It is pretty much universally understood that the Olympics are a bad investment. Building Olympic facilities usually means displacing low-income residents, and it tends to wreak havoc on a city's existing infrastructure. If your neighbor says, "Hey, wouldn't it be cool if the Olympics were held here?" the correct answer is probably, "No, Brian, that would not be cool. In fact, it would be the opposite of cool."

But since the Olympics must happen somewhere, it's good to see Rio looking for smart long-term uses for these short-term facilities.

The delegations parade during the opening ceremony. Photo by Gabriel Bouys/AFP/Getty Images.