When a woman realized her Uber driver was an Olympic dad, she decided to send him to Rio. 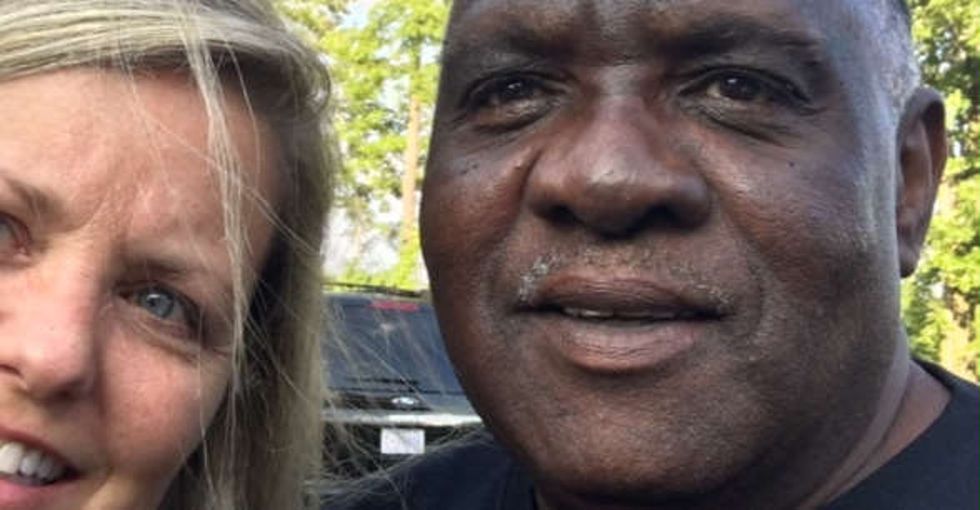 Ellis Hill had never driven his Uber across the river before.

However, shuttling a passenger over the bridge to New Jersey was just the latest in a series of firsts for the Philadelphia resident in July. His son Darrell, a Penn State track and field star, had just made the U.S. Olympic team for shot put on his first try.

Ellis never really thought about joining him in Rio de Janeiro. Traveling to South America, he explained, was simply more than he could afford.

"It wasn't in the cards at all," Ellis told Upworthy. "I was thinking about getting a good bag of popcorn and sitting down to watch it on TV."

But his passenger on that Uber trip, Liz Willock, had other ideas.

"I was just crushed because any good parent would want to see their son or daughter compete as Olympian," Willock told Upworthy. "I said, 'Ellis, you're an Olympic father! You need to go.'"

Willock, who works for a company that transports medical patients to and from clinical trials, quickly realized she could use her professional connections and experience to fund and plan a trip to Rio for him.

After consulting with Ellis' son Darrell, Willock launched a GoFundMe campaign to send the Olympian's father to Rio.

Willock credits the efforts of dozens of strangers for helping make the fundraiser a success, including a United Airlines pilot who donated airline miles to cover Ellis' flight to Brazil and the family of Joe Kovacs, Darrell's teammate, who were the first to donate and plan to meet Ellis when he arrives in the city.

Ellis, who has never traveled out of the country before, said that he's "ecstatic" to have the opportunity to watch his son compete in the games.

"This is really a big deal in our family right now," he said.

Darrell's cheering section back home includes his mother, siblings, grandparents, and friends from all over the country — including Ellis' new colleagues at Uber, among whom he's become a celebrity.

Though he doesn't expect to see Darrell until after he competes, Ellis explained that getting to soak in his son's success is its own reward.

The Olympic rings in Rio. Photo by Chris McGrath/Getty Images.

"It's just an awesome experience for a kid to put forth the effort and stick to it over the years, and actually train ... and get it on the first time around," he said.

While he would be thrilled if Darrell were to come home with a medal, Ellis said he'll be impressed regardless.

"The family and friends are extremely happy, and we're just waiting for him to stay focused and put forth the best effort he possibly can for himself."