Obama nailed why we can't forget the Orlando shooting was at an LGBTQ club.

'No act of hate or terror will ever change who we are or the values that make us Americans.' 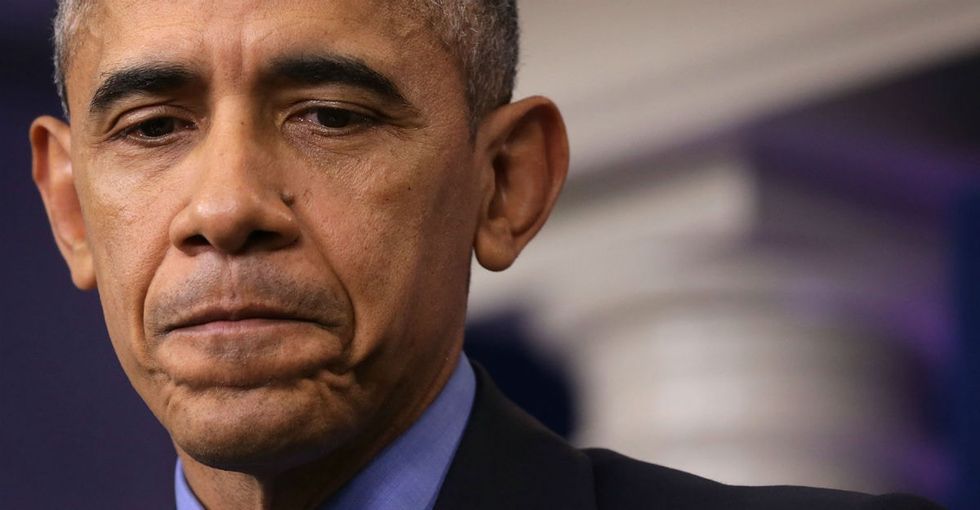 In the early hours of June 12, 2016, a gunman opened fire at Pulse nightclub in Orlando, Florida.

Pulse is an LGBTQ nightclub. That the attack happened there was no coincidence. It appears the gunman — who pledged allegiance to the Islamic state the night he killed at least 50 people — reportedly held deeply homophobic attitudes.

Sunday afternoon, President Obama addressed the nation, highlighting what made this most recent act of terror unique.

While the president confirmed the FBI is investigating the incident and thanked the courageous first responders who saved many lives, he also made a point to note why the location of this attack should not be overlooked.

"This is an especially heartbreaking day for all our friends — our fellow Americans — who are lesbian, gay, bisexual, or transgender," he said in his speech. "The shooter targeted a nightclub where people came together to be with friends, to dance and to sing, and to live."

"The place where they were attacked is more than a nightclub — it is a place of solidarity and empowerment where people have come together to raise awareness, to speak their minds, and to advocate for their civil rights."

The president is right. Dating back to the Stonewall Riots of the 1960s, LGBTQ nightclubs and bars have been much more than just spaces to have fun on a Friday night. These venues are where people have organized, protested, pushed for progress, and found safe spaces amid a hostile outside world.

This wasn't just an attack on Americans writ large — it was an attack on the freedoms that LGBTQ people have rallied for for decades.

"No act of hate or terror will ever change who we are or the values that make us Americans," Obama said.

The president also used his speech to highlight the continued need to act against gun violence.

Sunday morning's tragedy — the deadliest shooting in American history — is yet another example of why rampant gun violence in the U.S. is a uniquely American phenomenon.

"This massacre is therefore a further reminder of how easy it is for someone to get their hands on a weapon that lets them shoot people in a school, or in a house of worship, or a movie theater, or in a nightclub," Obama said.

"And we have to decide if that’s the kind of country we want to be. And to actively do nothing is a decision as well."

June is pride month across the country. As we celebrate progress made while honoring those who lost their lives in Orlando, let's also remember what inspires us to keep fighting: hope.

As LGBTQ rights activist Harvey Milk once said, "The only thing they have to look forward to is hope. And you have to give them hope."