Missy Elliott sang backup for her 'funky white sister' on Ellen and it was pure magic. 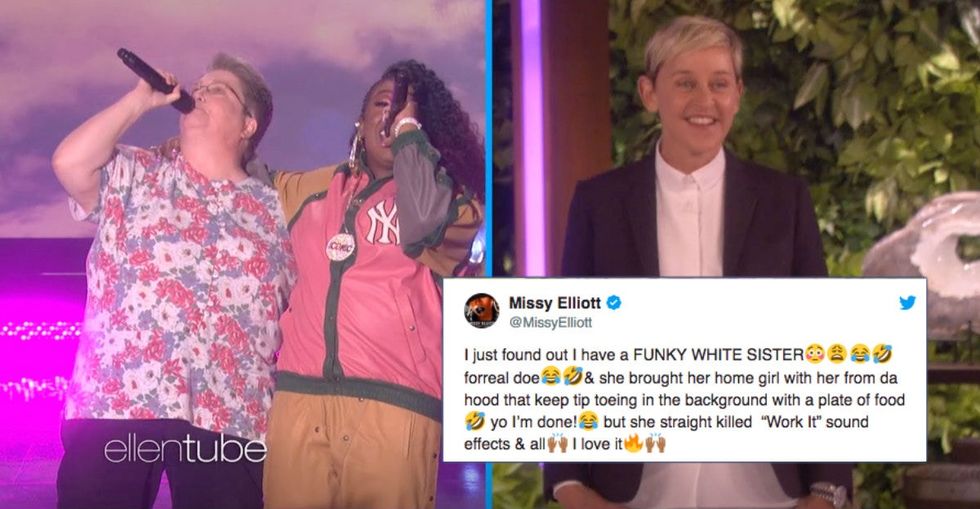 It is a truth universally acknowledged (don't @ me) that the one thing the world is waiting on is Missy Elliott's new album.

Do you also wake up every morning thinking, "Is this it? Is this finally the day that Missy drops the five to six albums of unreleased material she's got laying around and we call off work to chill in the "Supa Dupa Fly" suits we forced our mothers to make us in eighth grade?"

If so: I have some mixed news.

The bad: Missy Elliott has not released a new album yet (though there's a single and it's good!)

The good: She took a break from putting her thing down, flipping it, and reversing to sign surprise backup for her "funky white sister" on Ellen.

Who the hell is Missy Elliott's "funky white sister?" you ask. Yo, I'm about to tell you.

In August, a Rhode Island woman named Mary Halsey (who you will never convince me isn't just Sharon Gless doing research for a character role) went viral after she sang Elliott's iconic "Work It" with a shofar at a public function where it's possible children were present.  And Missy Elliott loved it.

Of course, Halsey and her shofar ended up on Ellen, where they* got the surprise of a lifetime.

Halsey, who'd refused all other interviews before the talk show magnate bade her to LA, showed up in the same outfit, holding that same shofar, but without her ice cream-eating, cooler-foraging backup dancer (which is a crime).

And when Ellen said "Sing for me!" Halsey did what she does best. She "Worked It" (sorry) while Kristen Bell freaked out backstage like she could sense that a sloth was near (for some reason).

Photo via The Ellen Show.

But there were no sloths!

There was only Missy Elliott. And she roared onto that stage to make all of Halsey's dreams come true.

You watch that video and tell me music doesn't bring people together.

“When she first said, ‘Missy’s funky white sister,’ I was like, ‘Who is this?’” Elliott said when the two sat down to talk to Ellen right after their blockbuster performance.

“So when I listened, I’m like, ‘She knows all the words, but the sound effects!’ She makes the elephant noise, all of that."

And now the two have been bonded together for life thanks to their performance and a bedazzled jacket that Ellen has gifted Halsey.

Photo via The Ellen Show.

Congratulations to all of us for living in this amazing time! Now, where's my album, Missy Elliott??

*I say "they" because even inanimate objects cannot help but be moved by Missy Elliott's music. That shofar has now been turned into a live boy and is wandering the streets of Rhode Island looking for its fortune. Best wishes!