Meet the man behind a new HIV vaccine that could help end the virus for good. 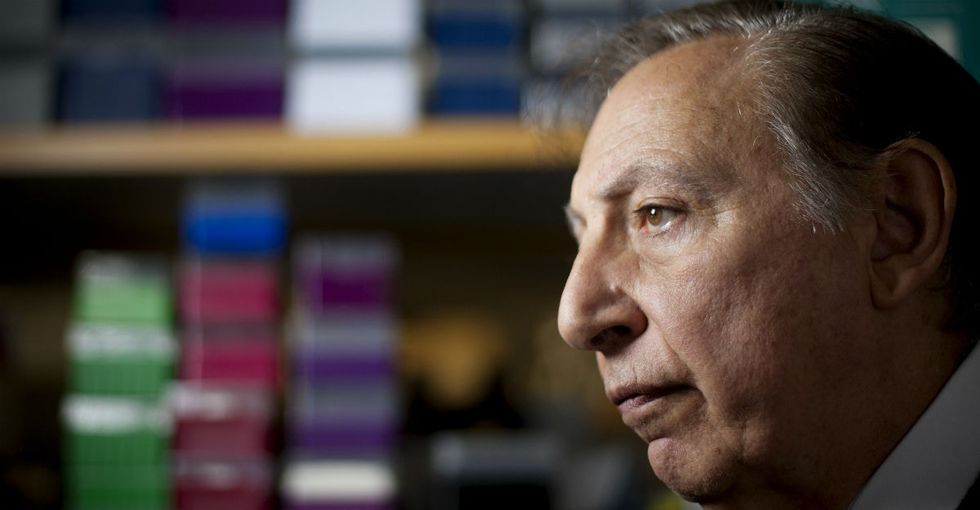 If there ever were a pioneer in the war on AIDS, Dr. Robert Gallo would certainly fit the bill.

He was among the leading researchers who discovered HIV actually causes AIDS back in 1984.

That may seem like common knowledge today. But back in the 1980s — when the AIDS crisis was ravaging communities across the U.S. and very little was known about the virus — it was nothing short of groundbreaking.

He then spearheaded a blood test that can detect the virus in humans.

And on Oct. 8, 2015, Gallo was at it again, announcing yet another big step in the fight against HIV: His potentially game-changing vaccine is going to human trial.

Sure, there are other HIV-fighting vaccines in human trial (about 30, in fact). But Gallo's vaccine, which has taken his team at the University of Maryland's Institute of Human Virology nearly two decades to produce, stands out ... in a good way.

There are many strains of HIV that can affect the immune system. And that makes creating a universal vaccine that stops all of them a bit tricky. If proven successful, however, Gallo's vaccine would protect patients' immune systems from the variations of the virus classified under "HIV-1," which constitutes the vast majority of infections worldwide.

"Our HIV/AIDS vaccine candidate is designed to bind to the virus at the moment of infection, when many different strains of HIV found around the world can be neutralized. We believe this mechanism is a major prerequisite for an effective HIV preventive vaccine." — Dr. Gallo

Enrollment in the trial opened this month, and the institute is looking for 60 people to participate in its year-long phase 1, according to The Baltimore Sun.

It's a promising step forward in the fight against a virus that's had a massive impact on global health.

An HIV-positive mother holds her baby in Malawi. Photo by Marco Longari/AFP/Getty Images.

Although new medicines have helped HIV patients live longer, healthier lives, there is still no cure for the virus. And even for those fortunate enough to be living in regions with access to such medicines, drugs can be expensive (although that doesn't stop some greedy pharmaceutical company CEOs from inflating prices even further ... yeah, I'm talking about you, Martin Shkreli).

Gallo's vaccine could be huge. But even if it turns out to be, there are plenty of hurdles before patients can benefit.

Gallo's announcement is exciting! But let's not put the cart before the horse. Before the vaccine gets clearance from the FDA and becomes a welcomed reality for patients, it has to successfully pass a range of human trials. And that will take several years to complete.

But Gallo is confident the long road ahead will bring promising results.

"Can I promise absolute success? No," Gallo said of the vaccine's potential, according to The Baltimore Sun. "Do I hope it leads to a series of advances in the fields? Yes. And I think it will lead to some advances."