Here's what it'll look like if trans people aren't allowed to use the right bathroom. 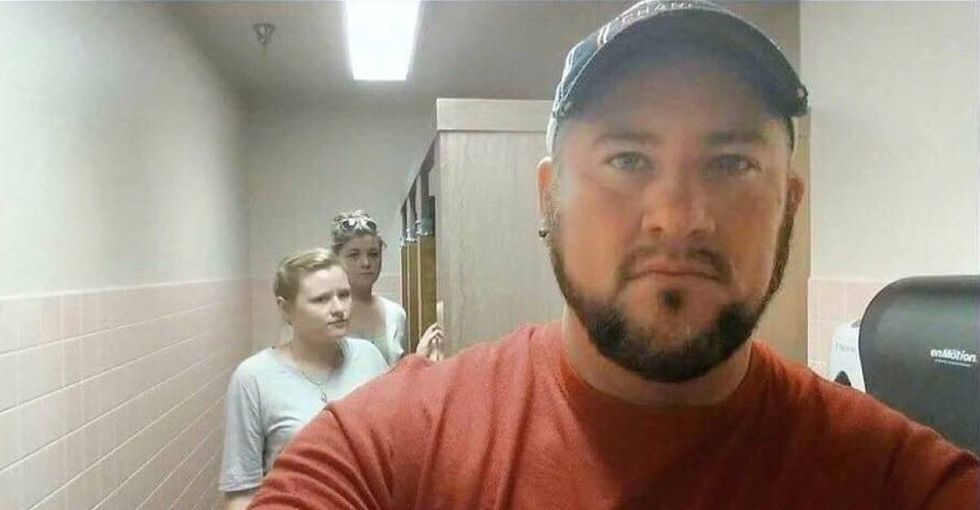 This is a man named Michael Hughes.

Why is he in a women's restroom?

Michael is protesting a series of bills across the U.S. and Canada that, if passed, would ban men like him from using men's restrooms and leave him no choice but to use the women's room.

Bizarrely, these laws have been proposed as a way to protect the privacy and safety of women.

(I know. It doesn't make sense, but hang with me.)

Michael is a transgender man, meaning that when he was born, the doctor looked at him and labeled him a girl.

Inspired by a woman from Canada, Michael has been snapping selfies in women's restrooms to show people just how out of place he looks.

If these types of bills become law, people like Michael and other trans men would be forced to use women's restrooms.

Is this the type of guy you want in your restrooms and locker rooms, ladies?

The main focus of these bills has been whether trans people should be allowed to use public restrooms, though they're often part of a larger effort to deny rights to trans people.

The penalty for using a restroom that doesn't match the gender "established by the individual's chromosomes" is up to a year in prison and a fine up to $4,000.

Even worse, the bill stated that an "operator, manager, superintendent, or other person with authority over a building" who willfully allows a trans person to use restrooms that match their actual gender will be charged with a felony and could serve a minimum of 180 days in prison and be fined up to $10,000.

Florida's language would have established gender as one's "biological sex, either male or female, at birth."

The bill's sponsor, state Rep. Frank Artiles, brushed off backlash by arguing that going to the bathroom is a choice.

The punishment for a trans person who uses the correct bathroom in Florida would have been up to a year in prison and a fine up to $1,000. The bill died in committee, and did not become law.

Kentucky's bill would have denied trans students the ability to use the correct restroom.

The bill came in response to a Louisville school's decision to allow a trans student to use the restroom that matches their gender.

While the bill didn't specify punishment for using the "incorrect" restroom, it did put what some are calling a "bounty" on catching trans students in the "wrong" restroom. The bill did not become law.

The groups pushing to deny trans people the ability to use restrooms simply spread misinformation.

Opponents of trans-inclusive environments argue that allowing trans people to use restrooms that match their gender invites and allows men into women's restrooms to leer and assault women at will.

Their arguments aren't based in reality.

(Still with me? The laws are pretty ridiculous, but now you know why they're being proposed.)

Trans women are not men, and Michael is not a woman.

When it comes down to it, trans people just need to pee. That's all.

Watch Michael Hughes' appearance on MSNBC's "Out There" with Thomas Roberts below:

In the last 20 years, the internet has become almost as essential as water or air. Every day, many of us wake up and check it for the news, sports, work, and social media. We log on from our phones, our computers, even our watches. It's a luxury so often taken for granted. With the COVID-19 pandemic, as many now work from home and children are going to school online, home access is a more critical service than ever before.

On the flip side, some 3.6 billion people live without affordable access to the internet. This digital divide — which has only widened over the past 20 years — has worsened wealth inequality within countries, divided developed and developing economies and intensified the global gender gap. It has allowed new billionaires to rise, and contributed to keeping billions of others in poverty.

In the US, lack of internet access at home prevents nearly one in five teens from finishing their homework. One third of households with school-age children and income below $30,000 don't have internet in their homes, with Black and Hispanic households particularly affected.

The United Nations is working to highlight the costs of the digital divide and to rapidly close it. In September 2019, for example, the UN's International Telecommunication Union and UNICEF launched Giga, an initiative aimed at connecting every school and every child to the internet by 2030.

Closing digital inequity gaps also remains a top priority for the UN Secretary-General. His office recently released a new Roadmap for Digital Cooperation. The UN Foundation has been supporting both this work, and the High Level Panel on Digital Cooperation co-chaired by Melinda Gates and Jack Ma, which made a series of recommendations to ensure all people are connected, respected, and protected in the digital age. Civil society, technologists and communications companies, such as Verizon, played a critical role in informing those consultations. In addition, the UN Foundation houses the Digital Impact Alliance (DIAL), which advances digital inclusion through streamlining technology, unlocking markets and accelerating digitally enabled services as it works to achieve the Sustainable Development Goals.

We're more than nine months into the COVID-19 pandemic and things are only getting worse. On Wednesday, December 2, America had its deadliest day yet with nearly 3,000 people succumbing to the virus.

America is experiencing its greatest public health crisis in generations and the only way we're getting out of it is by widespread administration of a vaccine.

However, if people don't take the vaccine, there will be no end to this horror story.

Megan was trafficked for a year. After the FBI rescued her, she found refuge at Covenant House New Orleans

This year, we've all experienced a little more stress and anxiety. This is especially true for youth facing homelessness, like Megan and Lionel. Enter Covenant House, an international organization that helps transform and save the lives of more than a million homeless, runaway, and trafficked young people.

Amazon is Delivering Smiles this holiday season by donating essential items and fulfilling AmazonSmile Charity Lists for organizations, like Covenant House, that have been impacted this year more than ever. Visit AmazonSmile Charity Lists to donate directly to a charity of your choice or simply shop smile.amazon.com and Amazon will donate a portion of the purchase price of eligible products to your selected charity.

Why seeing Presidents Obama, Bush and Clinton get the COVID-19 vaccine on live TV matters

With vaccine rollouts for the novel coronavirus on the horizon, humanity is getting its first ray of hope for a return to normalcy in 2021. That normalcy, however, will depend on enough people's willingness to get the vaccine to achieve some level of herd immunity. While some people are ready to jump in line immediately for the vaccine, others are reticent to get the shots.

Hesitancy runs the gamut from outright anti-vaxxers to people who trust the time-tested vaccines we already have but are unsure about these new ones. Scientists have tried to educate the public about the development of the new mRNA vaccines and why they feel confident in their safety, but getting that information through the noise of hot takes and misinformation is tricky.

To help increase the public's confidence in taking the vaccine, three former presidents have volunteered to get their shots on camera. President George W. Bush initially reached out to Dr. Fauci and Dr. Birx to ask how he could help promote a vaccine once it's approved. Presidents Obama and Bill Clinton have both stated that they will take the vaccine if it is approved and will do so publicly if it will help more people feel comfortable taking it. CNN says it has also reached out to President Jimmy Carter to see if he is on board with the idea as well.

A big part of responsible leadership is setting an example. Though these presidents are no longer in the position of power they once held, they are in a position of influence and have offered to use that influence for the greater good.

People are sharing their eye-opening stereotypes of American states

After being married for 47 years, this couple died of COVID-19 within the same minute