Google tweeted about ending online harassment. But it was the next tweet that shut the haters down.

Well, that's one way to prove a point. 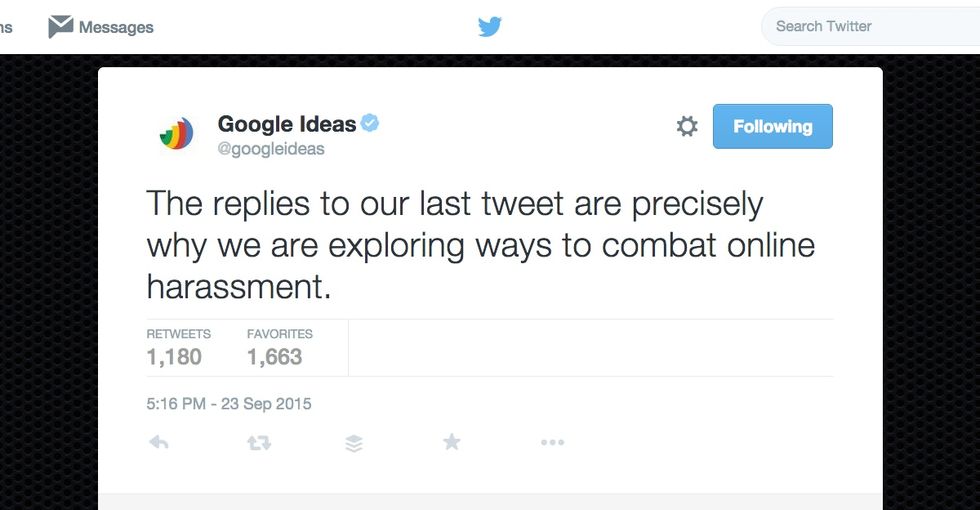 "Google Ideas is a team of engineers, researchers, and geopolitical experts who build products to support free expression and access to information, especially in repressive societies. We focus on the problems faced by people who live in unstable, isolated, or oppressive environments, including the billions of people who are coming online for the first time.

We believe that technology can profoundly expand access to information for people who need it most."


Among those present were video game developer Zoe Quinn, activist and writer Feminista Jones, and Feminist Frequency's Anita Sarkeesian — all of whom have been the subjects of incredibly scary, targeted harassment by mobs of strangers on the Internet. It was kind of a who's who of anti-harassment advocates.

And at the end of the day, Google Ideas did something completely normal: They tweeted a picture of the group.

Less than an hour later ... Google Ideas tweeted this:

Sadly, the tweets Google Ideas is referencing are kind of standard fare as far as the Internet is concerned.

There was some racism, some sexist insults, some fat-shaming, and a whole bunch of people telling Google and/or the group to kill themselves.

Online harassment is a real concern.

While it might seem all "sticks and stones," the reality is much more complicated than that.

Last August, Sarkeesian, one of the women in the photo, was driven out of her home after she received received a series of threats, one of which included her home address.

In October, a speech Sarkeesian was supposed to give at Utah State University was cancelled after the school received threats of a school shooting if the event went on as scheduled.

Journalist Laurie Penny dedicated a 2011 column in The Independent to the issue of online harassment:

"You come to expect it, as a woman writer, particularly if you're political. You come to expect the vitriol, the insults, the death threats. After a while, the emails and tweets and comments containing graphic fantasies of how and where and with what kitchen implements certain pseudonymous people would like to rape you cease to be shocking and become merely a daily or weekly annoyance, something to phone your girlfriends about, seeking safety in hollow laughter."

The following month, Google shared a form where people can report explicit images of themselves that have been posted without their consent. Between this and what the Google Ideas team is working on, it feels like the company is trying to make good on its "Don't be evil" mission statement.

Good for Google for taking on online abuse. Hopefully, the Internet can become a place where all feel welcome.