Fact: NASA takes the best before-and-after photos. Here are 10 of them. 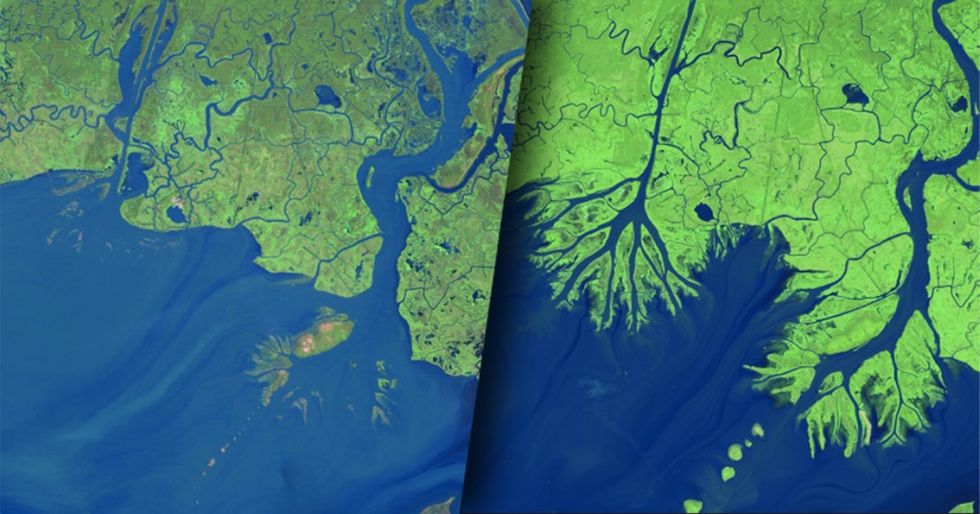 This article originally appeared on 01.23.17

NASA satellites continually monitor the Earth, snapping photos and sending information to researchers on the ground.

Most of the time, things seem to be more or less the same as they were the day before, but the Earth is actually constantly changing. Sometimes it changes through discrete events, like landslides and floods. Other times, long-term trends, such as climate change, slowly reshape the land in ways that are difficult to see.

By zooming way out, we can get a new perspective of the events that have changed the Earth. These 10 before-and-after photos show the disasters, trends, and changes that have affected our planet, as seen from space.

1. In May 2016, NASA's satellites picked up the devastating 2016 Fort McMurray wildfire.

In May 2016, a wildfire broke out near Fort McMurray in Alberta, Canada. It destroyed more than 2,400 homes and businesses and burned through roughly 1,500,000 acres of land before it was under control. (Some of the pictures use false-color imaging to distinguish between land types, by the way).

2. The satellites also captured how landscapes eventually recover from fires, like in Yellowstone.

In 1988, wildfires burned through over a third of Yellowstone National Park. 28 years later, images show that much of the forest and plains have returned.

Persistent drought has shrunk water supplies throughout much of the West. Scientists now think this may be linked to climate change.

4. And they showed the Mississippi pouring over its banks in March 2016.

Record-breaking rain inundated much of the Mississippi Delta in the spring of 2016, causing the mighty river to spill over its banks.

Mountaintop mining is often used to search for coal and can have lasting effects on the land.

6. In Washington state, the Oso mudslide changed the Earth back in 2014.

43 people were killed in the March 2014 landslide in western Washington.

Rivers and streams often carry sediment with them. As they slow down and reach the coast, that sediment falls out of the water. Over time, this can create new land, as you can see above.

8. The images show Hurricane Isaac touching down in Louisiana.

Hurricane Isaac hit the gulf coast in August 2012. 41 people lost their lives and more than $2 billion worth of damage occurred. Above you can see the flooding that still lingered afterward.

Over the last 28 years, warmer global temperatures have shrunk many glaciers, including Alaska's Columbia Glacier. From above, the shrinkage is crystal clear.

10. Meanwhile, our cities grew and expanded, like this image of San Antonio, Texas, shows.

San Antonio — home of the Alamo and the Spurs basketball team — had a population of just over 1 million people in 1991. Today, it's added another 400,000 people.

The above images are only a small set of the many pictures NASA released. Globally, there were a ton of other interesting sites, like entire lakes turning red in Iran, new islands being formed by ocean volcanoes, and dams flooding rainforests in Brazil.

The world — and our country — is constantly changing, and we play a part in that.

Sometimes nature changes us, such as people having to respond to floodwaters, but we also know humans affect the Earth as well. And while it's true that the Earth has gone through natural cycles, we know it's now happening faster than ever before.

As the Earth will continue to change, it's important to remain aware of how we affect the Earth — and how the Earth affects us.