Chinese citizens are responding to the smog problem in a pretty funny way.

Despite Internet censorship, Beijing residents are taking to social media to poke fun at the smog problem in their city. 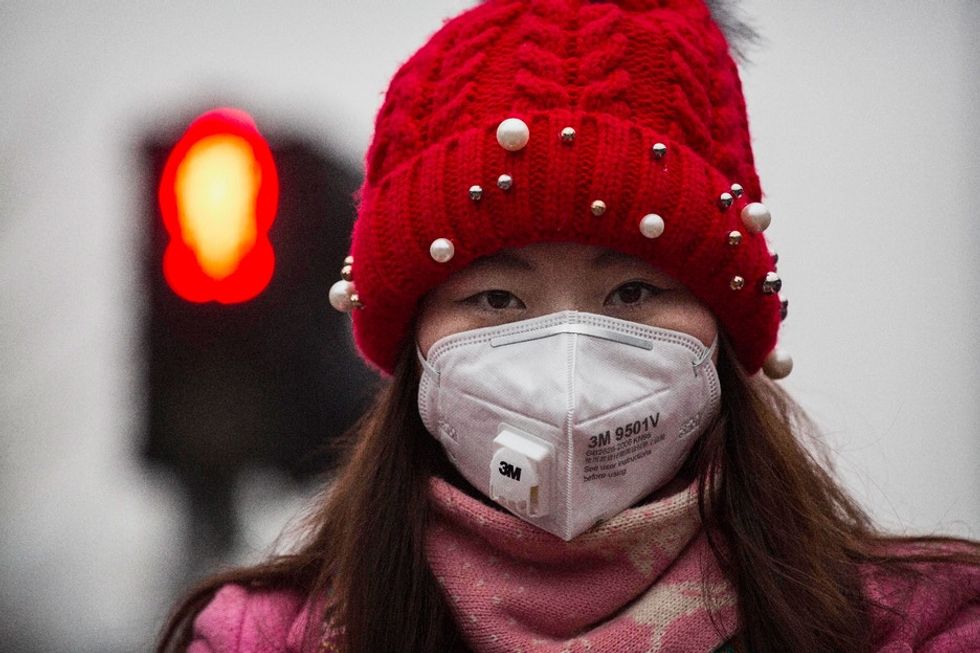 Remember when you were a kid, and you would wake up early on a school day, scamper over to the window, and see it snowing outside?

Remember the excitement you felt as you realized that school inevitably would be cancelled and you could spend the whole day sledding, having snowball fights, and making snowmen?

Well, imagine you’re a kid in China and school has been cancelled not because of powdery white snow but because of air pollution so bad that you can’t go outside without a major health risk.

The Beijing skyline is disappearing into the smog. Image by Kevin Frayer/Getty Images.

That’s what citizens of Beijing experienced Dec. 8, 2015, when much of the city was closed due to overwhelming smog.

Traffic was restricted in the city in an effort to reduce air pollution levels. Image by AFP/STR/Getty Images.

According to the U.S. embassy there, the air quality index stood at 250 — 10 times higher than the World Health Organization's recommended levels.

The red alert in China is the first since the country started using the color-coded warning system two years ago. With it comes massive school closures, traffic restrictions, and a complete halt in outdoor construction sites, all of which lasted until midday Dec. 10.

Meanwhile, the people of Beijing have taken to social media in massive numbers to express outrage and sadness.

The social network Sina Weibo, a Twitter-like service popular in China, was blowing up this week with thousands of messages containing tags like "Air pollution red warning" and "The haze is back again again again again."

Some messages are outright angry, expressing a sense of hopelessness that this problem may never be fixed. Others, though, have chosen to laugh at how egregious the problem is, using humor to draw international attention to it.

They’re even doing it despite China’s strict Internet censorship laws and history of trying to cover up media related to the pollution problem.

One resident mocked up this picture of an ominous monster looming in between the buildings shrouded in smog:

I would go see "The Smog Monster" movie. Just saying. Image via Weibo.

And another illustrated a crude outline of where the buildings in the Beijing skyline would be … if you could see them:

Beijing! Come for the view. Leave because there's no view. Image via Weibo.

During all of this, of course, leaders from China and all over the world are convening in Paris to discuss plans to address climate change.

It's easy to think of China as just some far away place or even an international rival. But there are no rivals when it comes to protecting the planet. And thanks to the people of Beijing, we can see that we’re not so different.

After all, as recently as 2002, the Los Angeles skyline looked like this:

70% of that smoke was from Snoop Dogg. Image by David McNew/Getty Images.

China and the U.S. are the two biggest polluters in the world. And as Chinese citizens on Weibo demonstrated, that's not the only thing we have in common.

Despite the Chinese government making an effort to censor open criticism from their citizens, the Chinese people are fed up with the conditions they live in.

Just like here in America, they’ve chosen to express their outrage in vast numbers and use humor to poke fun at their government.

Something we do here in America. Occasionally. And occasionally even, with great success. Here's hoping China can do the same.