At age 10, he won a gold medal at the Special Olympics. Now he's one of the best players in the NFL.

"Special Olympics gave me the first chance to discover a talent I didn't know I had." 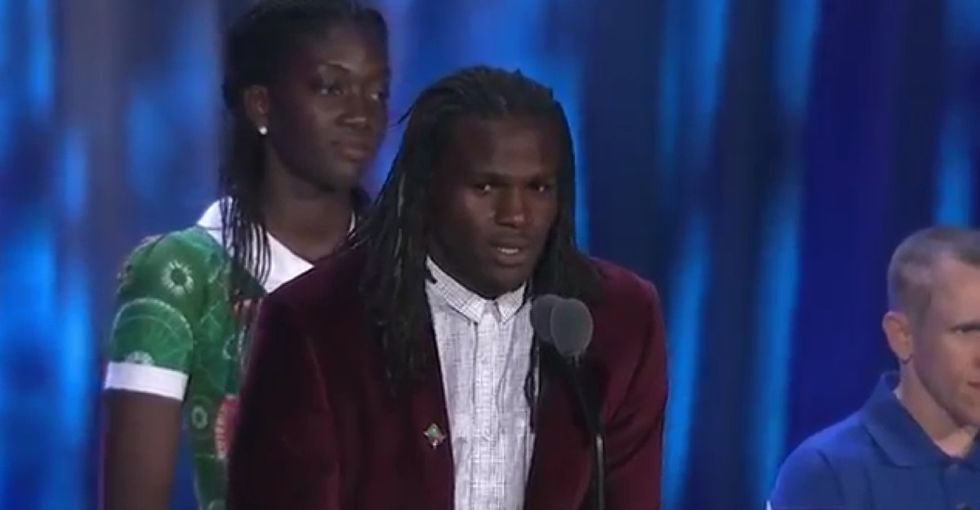 Kansas City Chiefs running back Jamaal Charles is one of the best players in all of football.

Here he is, hard at work:

Through the end of the 2014 season, Charles has racked up 58 career touchdowns, with 38 of them coming on runs like this. GIF via NFL.

What many fans might not know is that before he was a star on the NFL field, he competed in the Special Olympics.

When he was 10 years old, Charles competed in the Special Olympics games. Growing up, he struggled to read, later finding out that he had a learning disability.

Charles delivered an emotional speech during the opening ceremony of this year's Special Olympics, giving credit to the organization for helping him learn to believe in himself:

"I was afraid. I was lost. I had trouble reading. I found out I had a learning disability. People made fun of me. They said I would never go anywhere. But I learned I can fly. When I was 10 years I had the chance to compete in the Special Olympics. The Special Olympics gave me my first chance to discover a talent I did not know I had."

At 10 years old, Charles won the gold medal in track and field at the Special Olympics and came away with a confidence in his abilities that would follow him throughout the rest of his academic and athletic career.

Here's Jamaal Charles during his playing days at the University of Texas, running for a touchdown in the third quarter of the 2005 Big 12 Championship. Texas won the game 70-3 and went on to be named national champions. Photo by G.N. Lowrance/Getty Images.

He closed his speech by leading the crowd in the Special Olympics athlete oath: "Let me win. But if I cannot win, let me be brave in the attempt."

The Special Olympics has been helping athletes like Jamaal Charles since 1968 and, hopefully, for many years to come.

Founded by Eunice Kennedy Shriver, the organization's mission is to promote "understanding, acceptance, and inclusion among people with and without intellectual disabilities."

"Let me win. But if I cannot win, let me be brave in the attempt."

According to its website, the organization now has a presence in more than 170 countries and has touched the lives of 4.4 million athletes.

There's so much stigma that surrounds people with intellectual disabilities. Charles provides some much-needed representation.

As he says in his speech, when he was growing up, other kids teased him because of his learning disability. Various studies have shown that children with learning disabilities are more likely than other students to be bullied at school.

For an NFL star athlete to come forward and open up about his learning disability is huge. In giving this speech, Jamaal Charles is giving kids like him a role model; he gives them something to aim for. And maybe, he even gave would-be bullies something to think about before they pick on a classmate.

All this because of one short, honest, heartwarming speech.