Anyone who's lost a parent can relate to Prince Harry's candid chat with his brother. 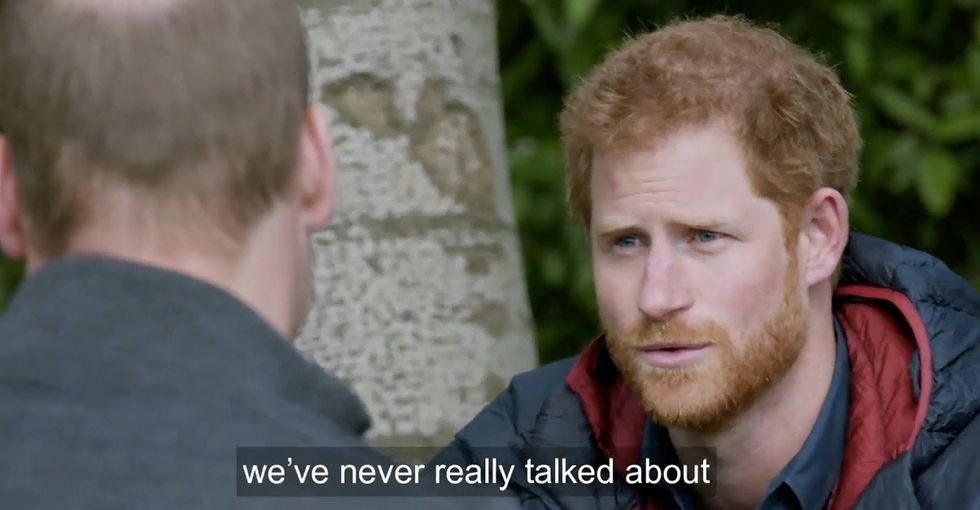 Prince William and Prince Harry are finally opening up about one of the toughest subjects imaginable: the sudden, untimely death of their mother in 1997.

In a new video, live-streamed on the royal family's Facebook page, the two brothers spoke about what they wish they had done differently when they lost their mother in a car accident nearly 20 years ago and why they hope that speaking out will help others experiencing similar loss.

All GIFs from Heads Together/YouTube.

Over the past year, the royal family has been working closely with mental health advocacy group Heads Together to reduce the stigma that surrounds mental illness.

Earlier this week, Harry gave an extremely candid and in-depth interview to The Telegraph's Bryony Gordon about what led him to seek counseling. The following day, William chatted with Lady Gaga for its #OKtoSay series.

Both brothers admitted to bottling up their feelings in the wake of Diana's death.

Listening to Harry struggle even to discuss just how hard it was to let himself think about his mother's death and hearing William's measured, firm, yet loving push to get his brother to that point makes it clear why this issue is so near and dear to their hearts. The royal family has an enormous platform, and they have chosen to use it discuss mental health — their own mental health — one of the hardest things to talk about in private, let alone so publicly.

This isn't easy for them, that much is clear. But 20 years later, following such a tragic loss, they're leading by example, and that is a very welcome thing indeed.

Watch the powerfully earnest conversation below, and learn more about Heads Together on the organization's website.

The Duke and Duchess of Cambridge and Prince Harry #OkToSay film

Please take a moment to watch this new film featuring The Duke and Duchess of Cambridge and Prince Harry that has been released as part of the Heads Together campaign's #OkToSay series.The film captures a conversation between Their Royal Highnesses that occurred at Kensington Palace as they looked ahead to this weekend's London Marathon and reflected on the growth of the campaign over the last year.The conversation covers a range of topics including the emotional changes new parents go through, bereavement, the stresses of modern childhood, and dealing with trauma in the workplace.The Duke and Duchess and Prince Harry are incredibly grateful to everyone who has shared their stories in recent weeks. And having asked others to start conversations on mental health with their friends and families, they wanted to show that they are taking part as well. They hope the film shows how positive a conversation on mental health can be.#HeadsTogether