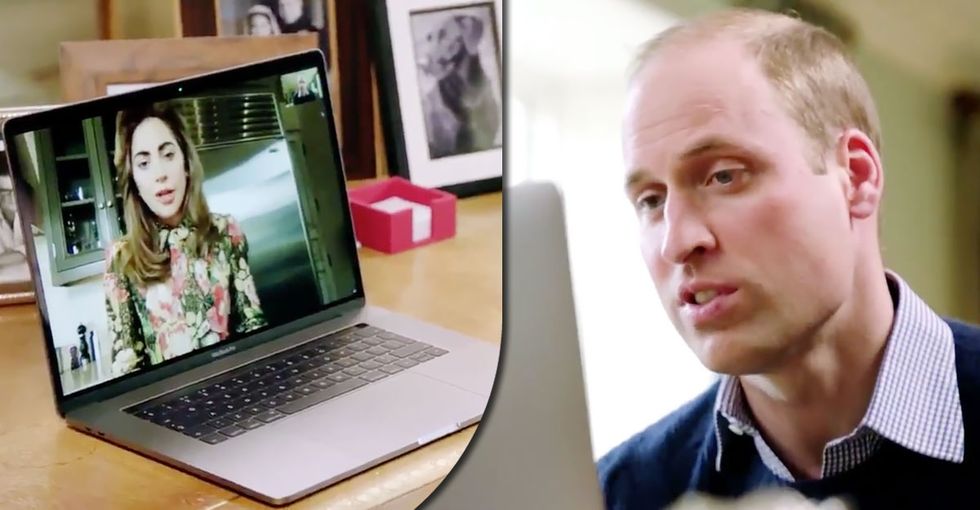 Lady Gaga is a big fan of the royal family's mental health awareness campaign — so much so that she gave Prince William a call from her kitchen to thank him for it.

On April 18, 2017, Kensington Palace shared a video of the two candidly FaceTiming across the ocean, chatting about the royal family's Heads Together initiative — an effort to get more people in the U.K. (and elsewhere) to de-stigmatize mental illness and speak up about their own experiences with mental health treatments.

In the video, Gaga — who, in 2016, shared that she's living with PTSD — praised Prince William, Prince Harry, and Princess Kate's efforts on the issue.

The campaign, she noted, has reminded her how much opening up about her own mental health changed her life.

"Even though it was hard," she explained, "it was the best thing that could come out of my mental illness — was to share it with other people."

As Prince William explains in the video, the royal family decided to prioritize mental illness awareness in part because it's such an intersectional topic, affecting other issues like addiction treatment, homelessness, and caring for veterans.

"Most of [these other causes] seemed to stem back to mental health issues," the prince shared.

Many Twitter users applauded the video's message and the duo's joining of forces to take on an important issue:

The topic of mental illness is also deeply personal within the royal family.

Just this week, Prince Harry opened up about his own struggles with mental illness years ago, dealing with the death of a parent at a young age as the entire world watched.

There was no magic "fix," of course — no one pill or single trip to a counselor made his mental health struggles disappear, Prince Harry told The Telegraph. But just taking that first (and often most difficult) step — opening up to others —  put him on the right path to feeling better.

"The experience I have had," he said, "is that once you start talking about it, you realize that actually you’re part of quite a big club."