The trolliest church in the world may have met its match. 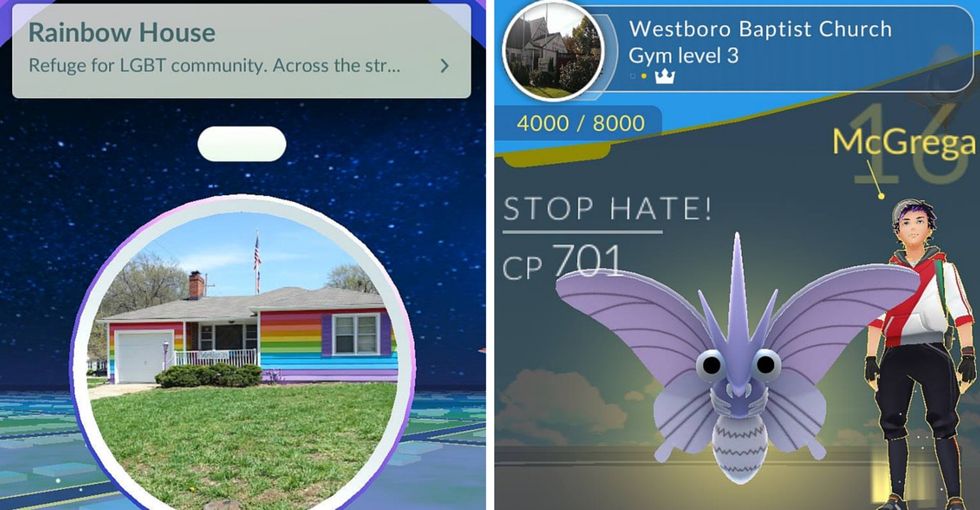 It's only been out for a few days, and Pokémon Go is already an international phenomenon, with players around the world doing what they can to "catch 'em all."

One of the more interesting stories, however, comes from Topeka, Kansas, home of the Westboro Baptist Church.

In the real world, the Westboro Baptist Church is known mostly as a hate group. But in the world of Pokémon Go, the church is listed as a gym, meaning it can be "fought for" by nearby players. Locals looking to troll the notorious church jumped at the opportunity.

Over the weekend, someone with a Clefairy Pokémon nicknamed "LoveIsLove" took control of the gym:

The church responded with its usual brand of cartoon-villain-like hatred.

I was interested in finding out who was behind the "LoveIsLove" Clefairy, and I had a pretty good idea of where to start.

I had a hunch that Davis Hammet, director of operations at the organization Planting Peace, might be the human behind the Clefairy.

Planting Peace is a nonprofit best known for the Equality House, a rainbow-colored house located across the street from the Westboro Baptist Church. Equality House bills itself as a symbol of compassion, peace, and positive change, and it serves as a resource center for Planting Peace's human rights and anti-bullying initiatives.

All screenshots courtesy of Davis Hammet.

In other words, Equality House strives to be Westboro's polar opposite — and it does a pretty good job.

Interestingly, Equality House is also included in the game as its own Pokéstop, a place where players can refuel on potions, Pokéballs, and other items.

In contrast to Westboro Baptist Church being a gym — a place of battle — it all kind of makes sense in its own way.

I reached out to Hammet, who told me that while he could confirm the person behind the "LoveIsLove" Clefairy was a teammate who helped take control of the WBC gym, he didn't know their identity in the real world.

In the days since "LoveIsLove" took control of the Westboro gym, its ownership has changed hands several times.

Hammet had an idea: He would win the gym back.

He hung up the phone and headed across the street to reclaim what was once his.

Along the way, he ran into a Staryu and sent along a photo of the the wild Pokémon with one of Westboro's hateful signs looming close behind.

It was certainly a sight to behold.

There, he and his Pokémon, which he nicknamed "Stop Hate!" won back control of the church. It was a symbolic victory, declared in the name of love and trolling.

Neat, right? All in a day's work, Hammet said.

"Planting Peace counters major messages of hate wherever they are, from Pokémon Go to the Republican convention."

Equality House attracts around 150 visitors per day, and with its new status as a Pokéstop, it's only seen traffic increase over the past few days.

The game may seem silly to some, but for others, it's having a big effect on their lives.

The Westboro Baptist Church battle is just one of many interesting narratives that have emerged from Pokémon Go's release.

Others include stories of strangers becoming friends and people claiming that the game's structure has helped them cope with depression.

More than 20 years since the Pokémon brand hit the U.S., it's still going strong.