Abby Wambach's 4 rules for success brought this graduating class to its feet. 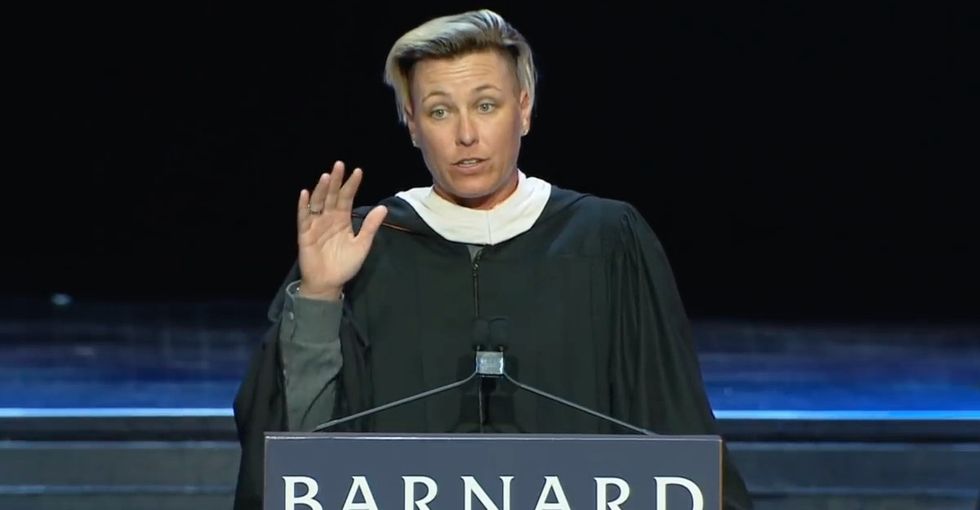 U.S. Soccer legend Abby Wambach addressed the Barnard College Class of 2018, letting them in on her four secrets to success.

Her remarkable speech deviated from some of the more common tropes that make their way into graduation speeches, and instead, she focused on the importance of teamwork.

Even as the all-time leading scorer in U.S. soccer history, the two-time Olympic gold medalist and 2015 World Cup champion emphasized the importance of working as a team. Barnard graduates are their own team, women are a team, and marginalized groups are a team — with considerable overlap among them.

"Like all little girls, I was taught to be grateful. I was taught to keep my head down, stay on the path, and get my job done. I was freaking Little Red Riding Hood," she said to laughter from the crowd.

It's that "Little Red Riding Hood" mentality that she urged graduates to break with.

"If I could go back and tell my younger self one thing, it would be this: 'Abby, you were never Little Red Riding Hood; you were always the wolf,'" she said, calling on members of the audience to embrace their places in the wolf pack.

Below are the four rules for success Wambach offered graduates. The rest of us can probably learn a few things from them as well.

"Here's something the best athletes understand, but seems like a hard concept for non-athletes to grasp," she said:

"Non-athletes don't know what to do with the gift of failure. So they hide it, pretend it never happened, reject it outright — and they end up wasting it. Listen: Failure is not something to be ashamed of, it's something to be POWERED by. Failure is the highest octane fuel your life can run on. You gotta learn to make failure your fuel."

What followed was a story about the time she was on the Youth National Team and got to visit the U.S. Women's National Team when she noticed a conspicuously placed photo reminding the adult team of its failure in the 1995 World Cup.

As her career wound down to a close, Wambach was asked to take a new and unfamiliar role on the team: the bench player. She wasn't happy about it, but went on to say how it inspired her to learn a new way of leadership — one we can all rally around.

"You'll feel benched sometimes too. You'll be passed over for the promotion, taken off the project — you might even find yourself holding a baby instead of a briefcase — watching your colleagues 'get ahead,'" she said:

"Here's what's important. You are allowed to be disappointed when it feels like life's benched you. What you aren't allowed to do is miss your opportunity to lead from the bench. During that last World Cup, my teammates told me that my presence, my support, my vocal and relentless belief in them from the bench is what gave them the confidence they needed to win us that championship. If you're not a leader on the bench, don't call yourself a leader on the field. You're either a leader everywhere or nowhere."

Women often find themselves set up against one another, competing for a single seat at the bargaining table. Wambach called on graduates to reject the premise of a single seat, instead using the collective power of the "wolf pack" to create a place for everybody.

"Scarcity has been planted inside of us and among us. This scarcity is not our fault. But it is our problem. And it is within our power to create abundance for women where scarcity used to live," she said:

"As you go out into the world: Amplify each others' voices. Demand seats for women, people of color and all marginalized people at every table where decisions are made. Call out each other's wins just like we do on the field, claim the success of one woman as a collective success for all women. Joy. Success. Power. These are not pies where a bigger slice for her means a smaller slice for you. These are infinite. In any revolution, the way to make something true starts with believing it is. Let's claim infinite joy, success, and power — together."

Touching on the story of one of her idols, fellow U.S. soccer star Michelle Akers, Wambach stressed the importance of being assertive when necessary and knowing your value. Too often, women are warned not to rock the boat, not to go too far off the path.

If we want progress, however, it's not going to come from sitting back and being polite, she warned:

There's a lot to learn from Wambach's speech, but the most important message is actually a question: Who do you want to be?

Watch the entire speech below. You can also read the transcript on Barnard's website.

This article was originally published on 7/22/2020

If you aren't familiar with textured hair, it's hard to know how to style it properly. Similarly to how straight-haired people may not know that curly-haired people often don't use shampoo, people who don't have textured hair often have no clue what products to use to keep hair healthy or what hairstyles work best with different hair types.

That can be a problem when non-Black parents adopt Black kids. Hair is a significant cultural reality, and knowing how to manage one's hair is important. If parents are clueless about helping their kids with personal grooming, children will grow up missing out on that aspect of their personal identity.

Enter Styles4Kids, a non-profit organization founded by Tamekia Swint in 2010. Swint had helped a transracial adoptive mom learn how to style her three daughters' hair, and that mom began referred Swint to other adoptive parents. She founded Styles4Kids with just a handful of clients, and how helps thousands of parents and kids. The non-profit organization focuses on hair care education, training, and services for transracial adoptive parents as well as children in foster care, residential facilities and detention centers.

Great Big Story created a video about Swint and her organization that explains why helping kids with their natural hair is so important.

"Sometimes transracial adoptive families don't understand how important hair is," Swift says in the video. "It's much bigger than. hair. It's really about the care and the confidence that we're giving to the child through the hairstyle."

A white mom with six Black kids shared her own realization that her hair styling skills were not up to the challenge, and how Swint helped her gain the skills and confidence she needed to help her care for and style her kids' hair.

"I would want to tell other transracial adoptive parents that it is your job to make your kid look decent when you're out of the house, and if you can't do that naturally on your own—and most of us can't—then it's your job to seek out help from somebody who can teach you."

Learn more about Styles4Kidz on the organization's website here.

We’re partnering with Meta to spotlight individuals and community organizers who are using their tools for good. We believe that positive actions can create a ripple effect of kindness, online and IRL.

From Your Site Articles
Related Articles Around the Web
race
Family