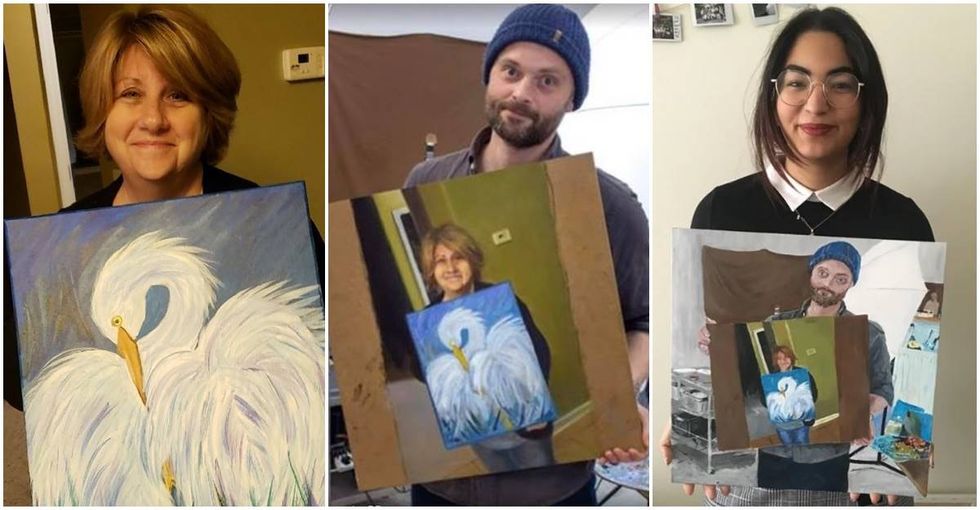 “The greater the artist, the greater the doubt. Perfect confidence is granted to the less talented as a consolation prize.” ― Robert Hughes

Great artists tend to live life swimming in a vast ocean of self-doubt. It’s that special blend of insecurity and perfectionism that fuels their desire to hone their craft and get better with each piece.

But that self-doubt can also be paralyzing and prevent potential artists from picking up the pen, paintbrush or guitar.

To encourage his mother to stick with her art, Reddit user Gaddafo shared a picture of his mother, Cindi Decker, a school teacher from Florida, holding a lovely painting she made of an egret.

“My mom painted this and said no one would like it. It's her 2nd painting,” he wrote.

Then Reddit user Cacahahadoodoo asked the forum to take the post a step further. “Someone paint the photo of his mom holding her painting and repost it with the same title for extra extra karma,” they wrote.

Karma is a reward earned for posting popular content on the online forum.

Reddit user u/k__z  jumped on the task and painted a picture of Decker holding her painting.

Then lillyofthenight took things a step further by painting a picture of herself holding a painting of u/k__z holding his painting of Decker holding her painting of an egret.

“Took a while and not perfect, but I painted the guy who painted the other guy's mom,” she wrote.

This kicked off a chain reaction that’s come to be known “paintception.”

To keep things from getting too confusing, another Redditor created an interactive tree to show how they paintings relate to one another.

Decker was shocked by the chain reaction and couldn't believe she inspired so many people to paint.

“Even though people say, 'You inspired me to paint,' I don't know that it was so much me. I really give credit to the first artist who painted,” she told the CBC. “You know, I'm not a painter. I'm just somebody who went out and did a little painting thing, so I got lucky to get caught up in all this fun craziness.”

The question is: will the craziness ever end?