'Bad behavior is rarely a sign of mental illness, and the mentally ill behave badly only rarely.' 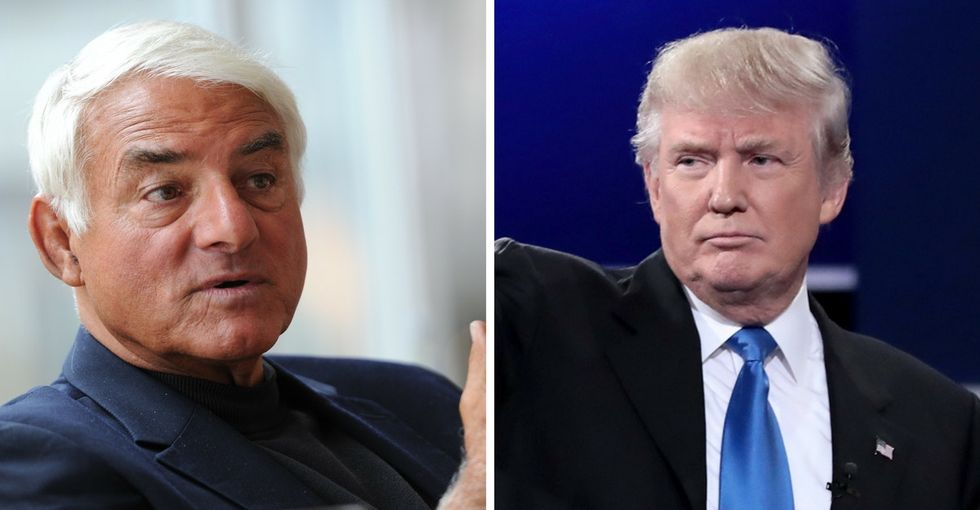 Donald Trump is a narcissist and everybody knows it — at least in the colloquial sense of the term.

The 45th president of the United States built his brand on being self-absorbed, self-obsessed. He's the type of man who's spent the better part of the past several decades living in a gold tower with his name emblazoned on the outside. He's put his name on everything from steaks to board games to vodka. He's a real-life Narcissus, gazing into his own reflection. He is pride, he is arrogance, he is vanity.

To untrained observers, he's the embodiment of narcissistic personality disorder. And yet, at least one man thinks that we're not giving Trump enough credit — and he's perhaps one of the most qualified people to make that assessment.

In a letter to The New York Times, Professor Allen Frances — who literally wrote the book the subject — offered a defense of Trump against claims that the president has narcissistic personality disorder.

The letter, titled "An Eminent Psychiatrist Demurs on Trump's Mental State," came in response to a letter the previous day signed by 33 mental health professionals who called for a lift on the American Psychiatric Association's 1973 Goldwater Rule against evaluating public figures. That letter argued that Trump suffers from a "personal myth of greatness" and "grave emotional instability" that makes him mentally unfit to serve as president.

In his letter in response, Frances explains that he personally wrote the criteria that defines narcissistic personality disorder as part of the team that wrote the Diagnostic and Statistical Manual of Mental Disorders IV (DSM-IV), and that Trump simply does not meet that criteria.

"He may be a world-class narcissist, but this doesn’t make him mentally ill, because he does not suffer from the distress and impairment required to diagnose mental disorder," wrote Frances.

Frances cautions that by diagnosing Trump with NPD, or any other form of mental illness, from afar, we risk further stigmatizing people who live with mental illness.

"Mr. Trump causes severe distress rather than experiencing it and has been richly rewarded, rather than punished, for his grandiosity, self-absorption and lack of empathy. It is a stigmatizing insult to the mentally ill (who are mostly well behaved and well meaning) to be lumped with Mr. Trump (who is neither)," wrote Frances.

"Bad behavior is rarely a sign of mental illness, and the mentally ill behave badly only rarely."

"Bad behavior is rarely a sign of mental illness, and the mentally ill behave badly only rarely. Psychiatric name-calling is a misguided way of countering Mr. Trump’s attack on democracy. He can, and should, be appropriately denounced for his ignorance, incompetence, impulsivity and pursuit of dictatorial powers."

Psychoanalyzing Trump won't do anything to put a stop to what Frances calls "a dystopic Trumpean dark age." The solution, he argues, "is political, not psychological."

Donald Trump greets supporters after a rally in Mobile, Alabama, in 2015. Photo by Mark Wallheiser/Getty Images.

Stigma remains a big issue in the mental health and disability communities. Even if Trump does have a mental illness, it's probably not a worthwhile argument against his leadership.

David Perry, a journalist focused on disability rights, says he doesn't see any political benefit to trying to discredit Trump on the basis of perceived mental illness. To start, Perry explains, one has to work under the presumption that there are voters who are OK with someone who demonstrates questionable behavior — like lying, bragging about sexual assault, and being prone to outbursts, and all the other criticisms people have about Trump — but who would be be dissuaded from supporting that person only on the basis of mental illness.

"Does that voter exist?" Perry asks. "If so, isn't that a perfect example of using stigma — against 'crazy' people — to gain political advantage? It's possible that voter does exist, since such stigma is pretty pervasive, but I'm skeptical that Trump supporters are capable of being persuaded by anyone's internet diagnosis anyway."

Mental illness affects people all around us. That doesn't make them, as Trump might call them, "bad hombres."

"So I get it. ... We're going to speculate," says Perry. "But every person I know who has a mental disability finds that speculation painful, because it suggests that you might expect them to behave like Trump due to their diagnosis. So that matters to me."

Mental illness is nothing to be ashamed of. According to the National Alliance on Mental Illness, roughly 1 in 5 U.S. adults experience mental illness in any given year. That's more than 43 million people. The problem, though, when it comes to mental illness, is that shame and stigma prevent many people from seeking care in a timely fashion. The truth is that when treated — whether that's with talk therapy, medication, exercise, diet, or something else — most forms of mental illness are pretty manageable.

Stigma makes seeking help a scarier process than it needs to be, so can we all agree not to add to it by trying to diagnose Trump from afar?