A contest is looking for the world's funniest pet photo. Here are 23 of the best so far. 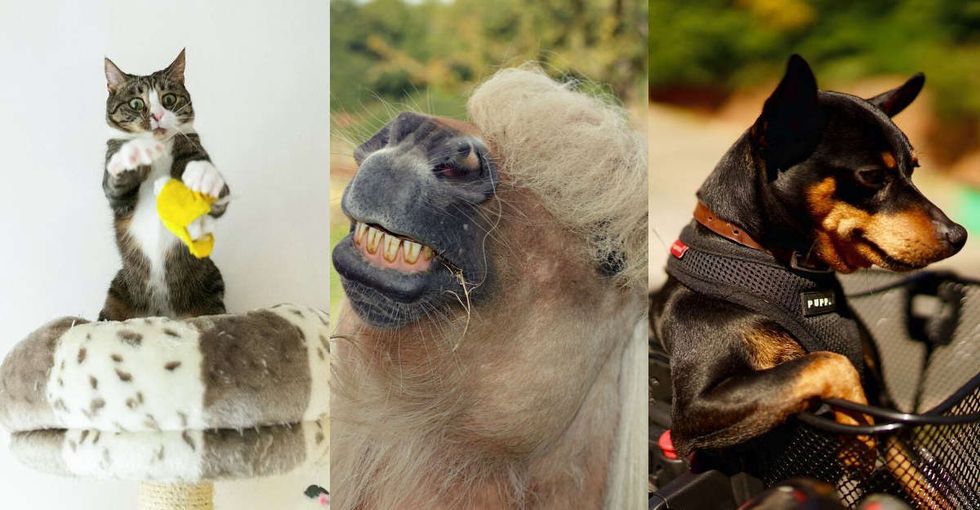 A dog striking a cool-guy pose in a bike basket. A horse gliding carelessly a few feet above the grass. A cat taking a #nofilter Instagram selfie. A panel of experts is currently debating the funniest pet photos on Earth — and some of the early favorites are in.

Submissions for the Comedy Pet Photography Awards have been open since January, and the entries so far have not disappointed.

"We wanted to see the funniest photos of pets from across the globe, and to our delight, the entries we've received so far have gone over and above our expectations," said contest co-founder Paul Joynson-Hicks.

The contest was launched by wildlife photographers Paul Johnson-Hicks and Tom Sullam as a spin-off of their highly successful Comedy Wildlife Photography Awards, which they started to showcase the best, most offbeat animal photography and raise money and awareness for conservation group Born Free.

Because the focus of this contest is on pet photos, the duo has partnered with the Humane Society of the United States and the Animal Welfare Foundation in the U.K. The awards are currently soliciting donations for both groups through their website.

The inaugural frontrunners for the 2017 Comedy Pet Photography Awards include:

1. This dog paralyzed with dread, powerless to stop the demon bubble's approach.

2. This cat checking in from downstairs to see what's up upstairs.

4. This cat lounging in a ceramic bowl.

5. This dog chilling in a bike basket.

7. This dog strutting into the speakeasy after applying too much rouge.

8. This cat bouncing you from the club.

10. This dog achieving its lifelong dream of catching the big tennis ball.

12. This dog halfheartedly pretending to be awake.

14. This dog smiling its prettiest smile.

15. This cat raining death from above.

16. This dog trying a little too hard to convey that he loves the birthday present you bought him.

17. This dog plotting an alternate route around traffic.

18. This cat realizing that the Matrix is real.

20. This dog venting its rage at a cold, unfeeling universe.

21. This horse aerating its teeth while its owner laughs.

23. These cowboy dogs riding off into the sunset.

Since the dawn of social media, millions around the world have waited eagerly for the day when looking at funny pictures of pets on their phones would earn them doing-good-for-the-Earth points.

Thanks to the Comedy Pet Photography Awards, the Humane Society of the U.S., and the Animal Welfare Foundation, that day is finally here.

The contest is accepting submissions through May 31. Winners will be announced this summer.