60 models. 12 sizes. One photo project to change how we view the human body.

What's size got to do with it? 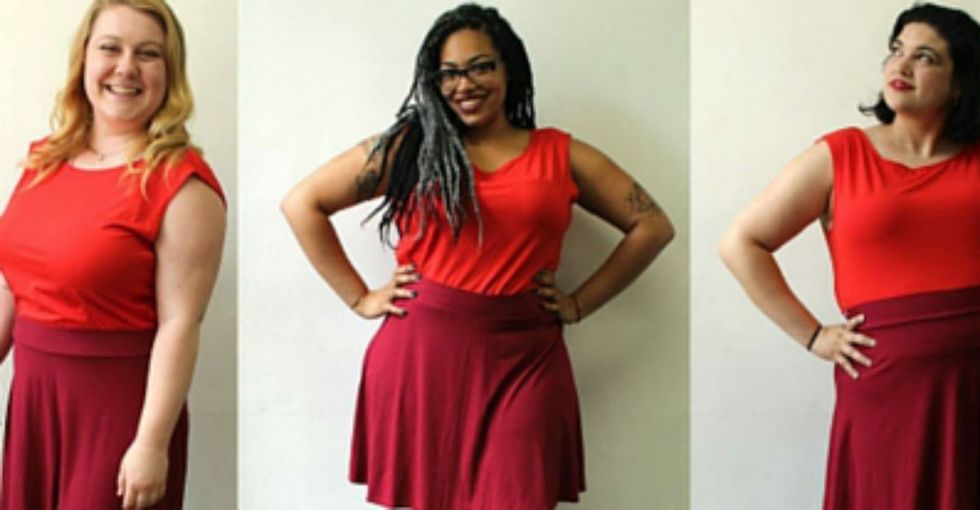 This article originally appeared on 07.27.16

Categories are great for some things: biology, herbs, and spices, for example.

But bodies? Well, putting bodies into categories just gets weird. There are around 300 million people in America, but only 12 or so standard sizes for clothing: extra-extra-small through 5x.

That's why designer Mallorie Dunn is onto something with her belief — people have different bodies and sizing isn't catching up.

All images via Smart Glamor, used with permission.

Human spice rack, only, a LOT more variations of flava. ;)

That's why she started a project around her clothing label, Smart Glamour, to document the bodies of models according to their sizes — and to show how one size can look very different on different bodies.

In pursuit of creating a fashion environment that's kinder to all bodies, Dunn has dedicated herself to educating consumers about sizing.

First, she found 60 people of 12 different sizes and took their pictures.

Then, she put five women at a time in the same size of skirt and shirt to show how diversely beautiful human bodies are and to prove that everyone looks different in clothes no matter what size they have on.

She hoped to show people that 12 sizes don't even come close to capturing the beauty of the human form.

All these models are wearing the same size ... but do they look the same?

"No matter what size you are that's not what dictates your worth or your beauty."

"I had a convo with a friend of mine who was like 'Yeah, if I went from a medium to a large, I'd be fine with it, but if I went from a large to an extra-large, that wouldn't be OK' and I was like, 'Why???' And she had no rational reason behind that," Dunn said, describing a conversation we've all either had, started, or heard. "We've been taught forever that the bigger something sounds, the worse that it is."

Unlike the images we are presented both in clothing ads and in entertainment and media, human beings aren't, as Dunn remarked, "robots who come out on a conveyor belt ... we're all shaped differently."

The pressure to look one way is obnoxious. And kinda dangerous.

"We've been taught forever that the bigger something sounds, the worse that it is."

There's so much weight — no pun intended — on being the "right" size.

"You put an 'extra' on top of a 'large,' and suddenly it's the end of the world," Dunn said of her experience in fashion sizing. "... And it really doesn't mean anything, it really only means that there's an extra inch of fabric."

One extra inch of fabric.

3 in 4 girls report feeling depressed, guilty, or shameful after just three minutes of leafing through a fashion mag.

But I'd like to imagine a world where everyone can try on clothes and leave the emotional burden of worrying about fit to the clothes.

Instead, let's focus on what looks good on our bodies. Let the clothes handle the emotional roller coaster of not fitting, and you just live your life in the body you've been given.

Dunn, who has worked for fashion houses for her whole career, puts it bluntly: "Clothes are not made for all bodies. ... We shouldn't then think when something doesn't fit us that it's somehow our fault."

Dunn's models also have a group on Facebook where they support each other, compliment each other, and generally lift each other up. Model Stephanie describes it this way: "We see the beauty in one another and help each other to recognize our own beauty at the same time." Fashion leading to body optimism and confidence? Yes, please.

And Dunn herself drives a hard line when it comes to feeling good in the skin you've been given. Her philosophy is this: No matter what size you are, that's not what dictates your worth or your beauty.

Self-worth not based on appearances. That's a category we can all aspire to "fit" into!

The suspect was identified by the scratches the squirrel left.

Ahhh, yes! The attack squirrel. Every home should have one, or at least, that's what an Idaho man whose home was protected by his rescue-squirrel-turned-pet might think. Adam Pearl found Joey, his pet squirrel, in his yard, abandoned as a baby and unable to fend for himself. Pearl took him in and bottle-fed him until he was big enough to eat on his own.

The unique pairing continued for 10 months until a man looking to burglarize Pearl's home got the surprise of a lifetime. He was attacked by the squirrel! The fluffy-tailed critter thwarted the man's plan to rummage through Pearl's belongings.

One can only imagine the confusion and terror of being attacked by something that would've gently eaten out of Snow White's hands. The burglar was apparently after the homeowner's guns and likely wasn't expecting a squirrel to go, well, nuts on him. It gets even better though.

Keep ReadingShow less
Get stories worth sharing delivered to your inbox
By signing up you agree to Upworthy's privacy policy.
Identity

The AIDS epidemic that began in the early '80s cast a stigma on all men who have sex with men, regardless of their HIV status. The idea that gay and bisexual men were somehow dangerous to the general public because of a health crisis in their community added to the stigmatization that already came with being LGBTQ.

In 1983, the Food and Drug Administration (FDA) banned all men who have sex with men from donating blood. This rule stood until 2015 when the FDA lifted the lifetime ban for gay and bisexual males and limited it to men who had homosexual sex within the past year.

In 2020, the FDA eased restrictions on men who have sex with men again, due to a blood shortage caused by the COVID-19 pandemic. The abstinence period was shortened from a year to three months.

Keep ReadingShow less
lgbtq
Get stories worth sharing delivered to your inbox
By signing up you agree to Upworthy's privacy policy.
Trending Stories
walmart
Top Splash