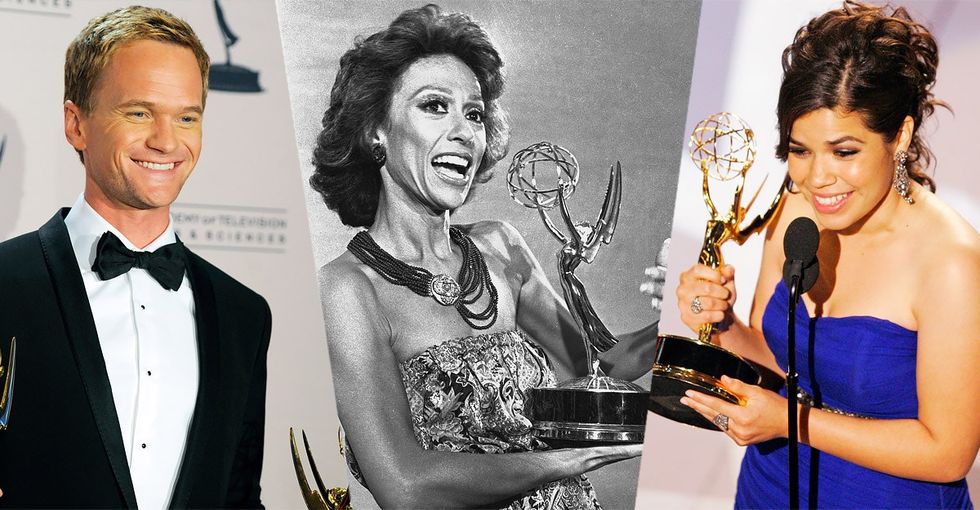 When the Primetime Emmys air on Sept. 18, 2016, you'll notice at least one person of color is nominated in every single leading acting category (that's never happened before!), and a notable 25% of all acting nods went to non-white performers — an improvement from last year and 2014, and much more diverse than the overall figure throughout history.

This landmark year wouldn't have been possible without those who broke barriers first.

From José Ferrer to Gail Fisher, from Peter Dinklage to Laverne Cox, countless performers have helped blaze the trail for future generations, making it that much easier for people of color, LGBTQ artists, those with disabilities, and more, to follow their dreams all the way to the Emmy stage.

Here's a timeline of some of our favorite, most notable Emmy firsts:

The awards were for Most Outstanding Television Personality, the Station Award for Outstanding Overall Achievement, a Technical award, the Best Film Made for Television, and Most Popular Television Program. A special Emmy was also given to the statue designer.

Danny Thomas won Best Actor Starring in a Regular Series for his role in "Make Room for Daddy."

Ethel Waters was nominated for Outstanding Single Performance by an Actress in a Leading Role for her work in "Route 66."

Gail Fisher won Outstanding Performance by an Actress in a Supporting Role in a Drama.

Rita Moreno won Outstanding Continuing or Single Performance by a Supporting Actress in a Variety or Musical for her work in "The Muppet Show."

Isabel Sanford was nominated for an Emmy seven times in total for her role in "The Jeffersons."

Marlo Thomas won Outstanding Lead Actress in a Miniseries or a Special for her work in "Nobody's Child."

This year, Tracee Ellis Ross is up for an Emmy in the same category, making her the first actress of color to be nominated since Ferrera, who was also nominated in 2008 as well.

Laverne Cox was nominated for Outstanding Guest Actress in a Comedy Series.

Drama categories at the Emmys remain stubbornly behind the times on the diversity front, which made Viola Davis' win that much sweeter.

A win by Aziz Ansar for his role in "Master of None" would make an even bigger splash in the history books, while A&E's "Born This Way" already took home Outstanding Unstructured Reality Program this year.

Don't let the timeline fool you, though: We still have work to do.

Hollywood is still very white, very straight, and very cisgender (as evidenced by the Oscars).

As you may have noticed from the timeline, no actor of South, Southeast, or East Asian descent has ever won an acting Emmy, and although it's fantastic Tracee Ellis Ross is up for Outstanding Lead Actress in a Comedy for her role in "Blackish," it's the first time a black woman has been nominated in that category in three decades. As Vulture pointed out, the coveted drama categories are still lagging on the diversity front too (just three of the 24 acting slots for dramas went to people of color this year).

What's more, the Emmy firsts above don't take into consideration the quality of the characters; many actors from marginalized groups are too often boxed into overlooked or "token" roles that allow harmful stereotypes to persist. It's still too rare to see complex, thoughtful, realistic roles created for actors who aren't white, straight, and able-bodied. We can do better.

Let's not celebrate the 2016 Emmys as the best we got. Let's use it as a springboard to make sure each year we get better at recognizing all the actors and characters who deserve their stories be told too.