14 poignant pics of Holocaust survivors and 14 heart-wrenching notes to go with them.

Stark and brazen in the face of history, these faces shine out and remind the world of its darkest moment but also its brightest future. 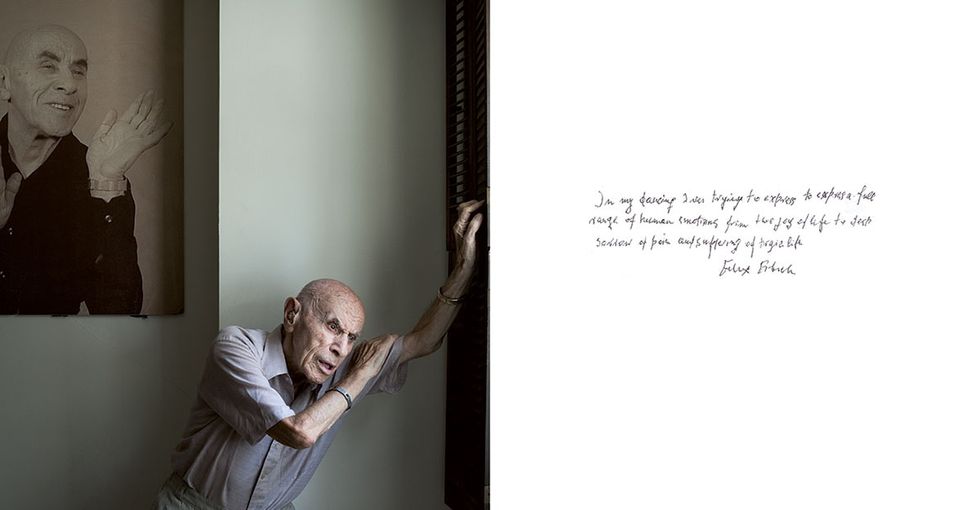 "Survivor" is a photo series that tells the story of over 200 people who survived an important and painful episode in history.

Every person featured in the series is a survivor of the Holocaust. Each portrait is accompanied by a caption, written in their own handwriting. The messages range from feelings of unquenched anger, to peaceful resolution, to hope for the future.

Photographer Harry Borden, a seasoned celebrity photographer, started the project 10 years ago and spent five years traveling the globe to meet and photograph his subjects. He photographed the survivors in their own homes using natural light to create a sense of intimacy.

“I wanted to do something that would have a lasting ... impact,” Borden told ABC News Australia. The series is both incredibly moving and a way of preserving the voices of those who lived through one of the darkest moments in recent human history — voices that should not be forgotten.

"In my dancing I was trying to express a full range of human emotions from the joy of life to deep sorrow of pain and suffering of tragic life." Photo by Harry Borden.

"I believe I’m the last Holocaust survivor out of the 70 or so Jewish families including my mother, sister and brother who lived in my birthplace of Zagórów in Poland. I still live with the nightmares." Photo by Harry Borden.

"The last time I saw my parents was when we arrived at Auschwitz. My father came back to get his prayer book. He kissed us and said, 'We will never see each other again.'" Photo by Harry Borden.

"In Limbo: In the black hole of our Planet Earth / Auschwitz / They drove me out / When it ceased to be; / Yet who will drive it out of me? / It still exists. / Only death will be my exorcist." Photo by Harry Borden.

"Little did I know that I would find the strength to survive those insufferable circumstances that are still far beyond human understanding. I am proud to say that I am here, but many of those who are part of our life are not. And so my heart silently weeps." Photo by Harry Borden.

"At the end of the day, Holocaust was all about people!! Good people, bad people, and the ones who were indifferent. For me survival is an on-going process." Photo by Harry Borden.

"The best time of my life is when I am with my family." Photo by Harry Borden.

"It is our moral and conscientious obligation of the survivors of The Holocaust, and of Jews all over the world, to carry the torch of remembrance of The Holocaust and The Heroism of this Human Earthquake in 'Cultural Europe' (1939–1945), from generation to generation, to those generations — when none of us — survivors of the flames of hell will be alive anymore." Photo by Harry Borden.

"Having today 3 children and 14 grandchildren, I think I won the war against Hitler!" Photo by Harry Borden.

"I am a child survivor. Those of us who survived were not more worthy than those who perished. Nor were we braver, richer, smarter or more resourceful. We were not. We were just luckier." Photo by Harry Borden.

"As a hidden child I frequently lecture to children about my experiences. My great concern is who will continue to tell our stories when we’re gone in not too many years?" Photo by Harry Borden.

"I think of myself as a person, a wife and mother first and a survivor last." Photo by Harry Borden.

As each year passes, fewer and fewer survivors are left to share their stories.

Each photo and message is a reminder of our collective responsibility to never forget the horrors of the past, to honor those who did not survive, and to ensure this never happens again.

Watch the video below for a behind the scenes look at the making of the book: