What 'Master of None's' Emmy wins and losses say about the future of TV. 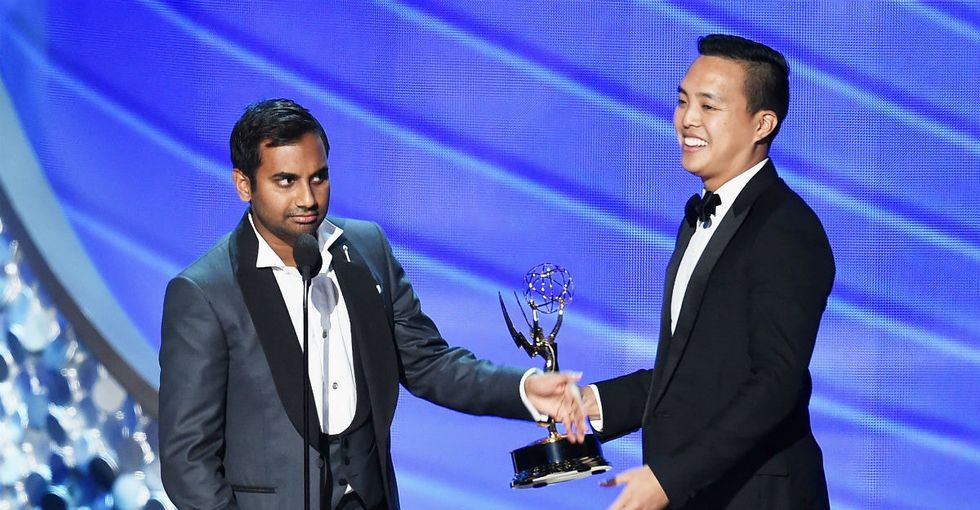 Alan Yang and Aziz Ansari gave a funny, important speech at the Emmys on Sept. 18, 2016.

The duo accepted the award for Outstanding Writing for a Comedy Series for their show, "Master of None" on Netflix — a big win for diverse television and the people behind the scenes who make it.

It was one of those speeches that should have gone about five minutes longer — not just because it was fantastic, but because Ansari totally got cut off by the music before he could give what was probably going to be an epic speech himself.

Watching Ansari get rushed off stage wasn't the only downer for his fans, though; soon after, we watched as he lost what would have been an enormous win in a different category.

Ansari was nominated for Outstanding Lead Actor in a Comedy Series. He would have been the first South Asian actor to ever win in a leading category.

But he lost. And that, of course, means there's still never been a South Asian actor to win a leading category. Ever!

Although Ansari's co-writing win was great, his acting nod loss (as well as his show's loss in Outstanding Comedy Series) touches on the state of diversity on television Yang alluded to earlier. Because while the Emmys may be more diverse than the Oscars, there’s still a lot of work to be done.

Throughout the 68 Emmy award shows, no East Asian actor has ever won, either. (None!) 30 years have gone by since the last black woman was nominated for Lead Actress in a Comedy (shout-out to Tracee Ellis Ross for breaking the streak this year). And the acting slots for drama? They’ve been particularly behind on the diversity front — this year, just three of the 24 acting slots in those categories went to people of color. (These stats are all on top of the fact Ansari's loss was to quite the problematic category favorite.)

That's not OK to the "Master of None" star.

Ansari has a history of speaking out on the importance of diversity in Hollywood. And he walks the walk, too.

As a co-creator of "Master of None," he's helped develop one of the most diverse casts on TV right now. He gets why representation in our media matters.

"I want to thank Netflix and Universal for believing in us and letting us tell our stories," he said back in May at the Peabody Awards. "I think they really seem to get what diversity really is. It's not, 'Hey, let's give this white protagonist a brown friend!' No. It's, 'Let's have a show where there's a token white guy.' And that's what [our show] is."

Things are looking up though. Despite Ansari’s loss tonight, diversity at the Emmys have gotten a lot better recently.

"I believe in us," Yang said in his Emmys speech. "It's just gonna take a lot of hard work."

That hard work is already paying off.

This year, 25% of the acting nominees were people of color — since the first Emmys, just 9% of the nominees in total have been actors of color — so 2016 was certainly a step up.

Even better, it’s probably not a one-off. The past few years have boasted relatively inclusive nomination slots, which means there’s every reason to be hopeful diversity at the Emmys isn’t just a fad.

Check out Upworthy’s timeline of trailblazers who’ve helped make the 2016 Emmys one of the most diverse ever.