'We are going to carry you': Students bring teacher to tears after the Florida shooting. 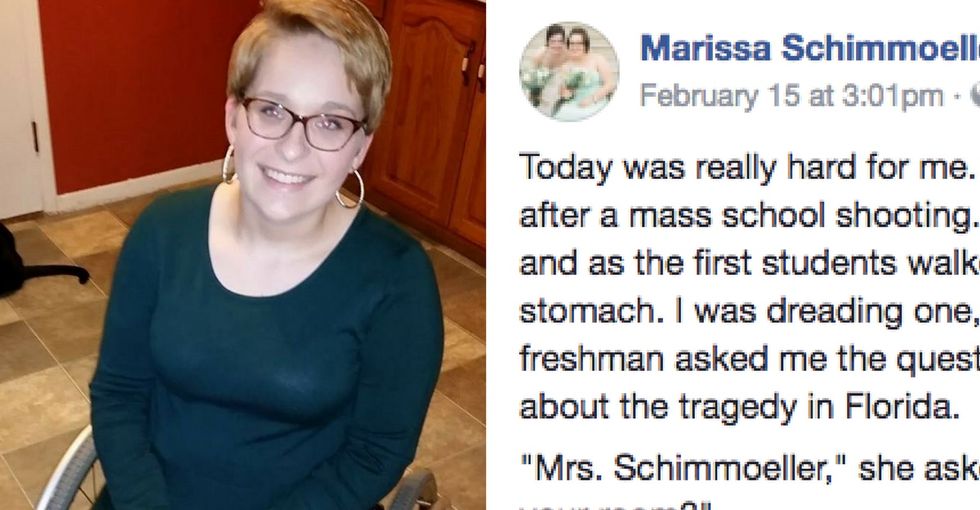 Marissa Schimmoeller teaches English at a high school in Ohio. She also happens to use a wheelchair.

As you may expect, Schimmoeller was on edge returning to work after the horrifying shooting at Marjory Stoneman Douglas High in Florida. "As the first students walked in, I began to feel the anxiety pooling in my stomach," she recollected from those first tense moments starting a new day.

But Schimmoeller was dreading one question specifically because she uses a wheelchair: "Mrs. Schimmoeller, what will we do if a shooter comes in your room?"

Inevitably, the question was asked.

"My stomach sank," Schimmoeller wrote in a Facebook post on Feb. 15. "I launched into my pre-planned speech about our plan of action."

But then came the more difficult part of her answer, she noted — the part she'd especially been dreading.

"I want you to know that I care deeply about each and every one of you and that I will do everything I can to protect you," she assured them. "But, being in a wheelchair, I will not be able to protect you the way an able-bodied teacher will."

She continued: "If there is a chance for you to escape, I want you to go. Do not worry about me. Your safety is my number one priority."

That's when her students brought her to tears.

"Slowly, quietly, as the words I had said sunk in, another student raised their hand," the teacher wrote in her post. "She said, 'Mrs. Schimmoeller, we already talked about it. If anything happens, we are going to carry you.'"

"I lost it," Schimmoeller concluded in her post, which has amassed more than 33,000 likes and nearly 19,000 shares as of publication.

Today was really hard for me. Today was the first time I had to teach the day after a mass school shooting. I dreaded...

"With tears in my eyes as I type this, I want my friends and family to know that I understand that it is hard to find the good in the world, especially after a tragedy like the one that we have watched unfold, but there is good. True goodness. It was found in the hearts of my students today."

They're also having to think about things no teenager should: how to help their teacher (and themselves) survive a mass shooting.

We are better than this.

You can support students taking action against gun violence at March for Our Lives or visit Everytown for Gun Safety to learn more and act.