Turns out, everybody says 'huh' — or at least something pretty darn close.

The one word that sounds the same and has the same meaning in every language. 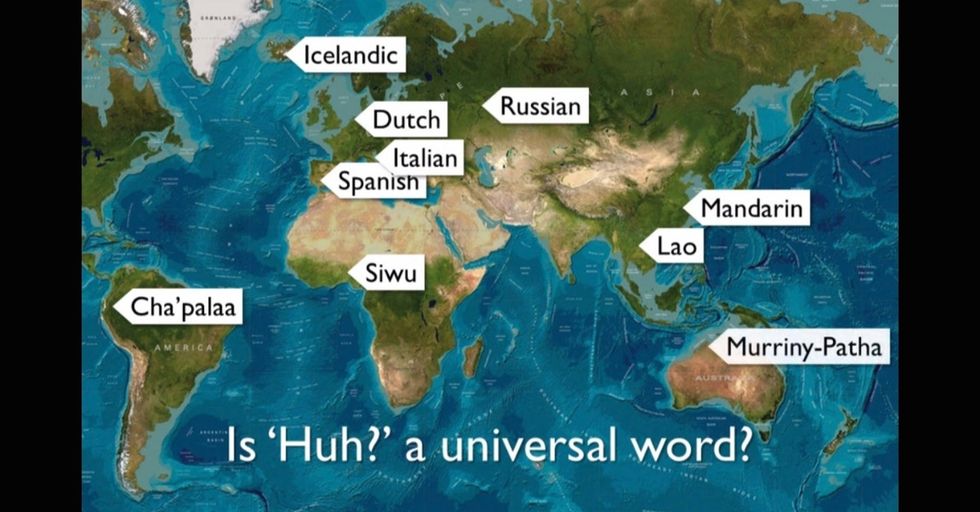 There are many, many different languages spoken in this world — so many, in fact, that Wikipedia can't fit all of them in one list.

The list of lists is broken down by region of origin, and many languages share a common lineage.

But if you select two or three of different origins, you may end up with different character sets, sentence structures, and even different directionality. That is, you'll find few similarities between unrelated languages.

But there's one thing which we all — regardless of language — may have in common. One syllable, that is:

The Merriam-Webster Dictionary defines "huh" as an interjection that is "used when you have not heard or understood something that was said." That's the American English definition of the term, of course.

But it's also the definition of the same or very similar noise-like word in at least two dozen different languages, according to researchers at the Max Planck Institute for Psycholinguistics in the Netherlands.

What this research study found was that "Huh?" is "universal."

"We sampled 31 languages from diverse language families around the world in this study, and we found that all of them have a word with a near-identical sound and function as English Huh?"

Quote is from an external site on which the authors summarize their study.

"This is an exception to the normal situation, namely that when words in different languages mean the same thing, they will usually sound completely different: compare, for example, these very different-sounding words for 'dog': inu in Japanese, chien in French, dog in English.

Why do these differences between the sounds of words across languages occur? Because language does not impose any necessary connection between sound and meaning in words (a principle that linguists call 'the arbitrariness of the sign'). This study shows that 'Huh?' is a rare exception to this otherwise strong rule."

Not convinced? You can read the full paper here, but if you're looking for a shorter bit of evidence, the researchers also put together a 21-second video with 10 recordings of a “huh"-like sound from various parts of the world — watch that here.

There are some variations in "huh" across languages, but they all follow a similar pattern.

As the Los Angeles Times explained:

"Sometimes this simple word started with a consonant, as does the English 'Huh?' or the Dutch 'Heh?' (Spellings are approximate.) Across all 10 languages, there were at least 64 simple consonants to choose from, but the word always started with an H or a glottal stop — the sound in the middle of the English 'uh-oh.'"

Amazingly, the research team concluded that these common sounds-as-words do not share a common origin.

As NPR explained, each of the languages surveyed developed the "huh" term independently: "Every language needs a way to for a listener to signal to the speaker that the message has not been received," and "'huh?' is so optimal — it's short, easy to produce, easy to hear, capable of carrying a questioning tone, and so on — that every human language has stumbled upon it as a solution."