Trump says undocumented immigrants are dangerous. This congressman has a great response.

Rep. Jared Polis is shining a light on Trump's attack on immigrants. 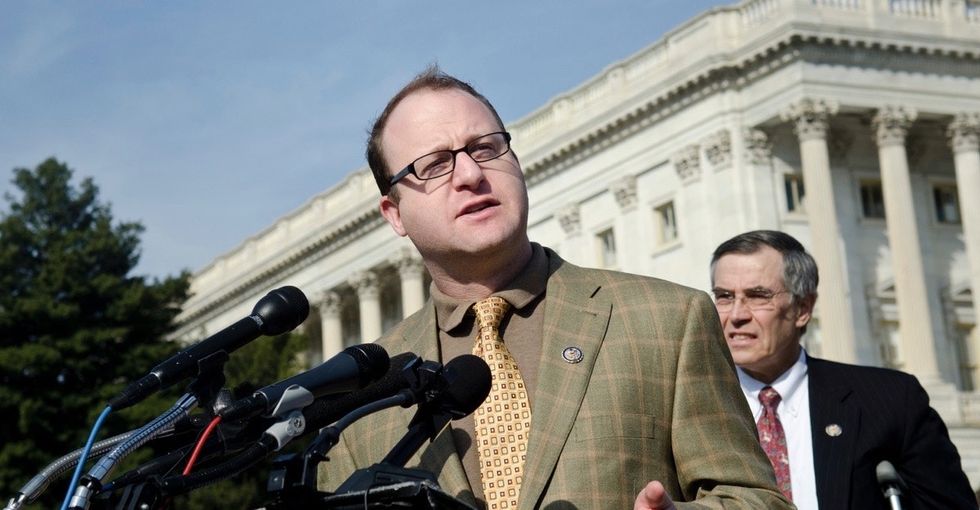 When President Donald Trump announced a plan to publicize crimes committed by undocumented immigrants, members of the audience gasped in surprise and disappointment.

The program is called the Victims of Immigration Crime Engagement office (VOICE), and its goal, as outlined by Trump during his February address to a joint session of Congress, is to study "the effects of the victimization by criminal aliens present in the United States" and publicize crimes committed by undocumented immigrants.

Critics worry — and rightfully so — that the program will create a false impression that immigrants are prone to violent crime, a popular misconception that has been consistently debunked. A recent study found that immigrants — undocumented or not — commit crimes at a lower rate than natural-born citizens. They also contribute a lot to the U.S. economy.

In response, Rep. Jared Polis (D-Colorado) launched a similar database with the idea to counter Trump's narrative by telling positive stories about immigrants.

While something needs to be done about our current immigration system, trying to sway public fear by smearing undocumented immigrants as violent (false), job-stealing (false) freeloaders (false, false, false) is a disingenuous way of going about it.

Facts matter, and that's what Polis hopes to demonstrate with his new Saved by American Immigrants National Taskforce (SAINT). In a press release, Polis explained that the purpose of SAINT is "to collect stories of immigrants — both documented and undocumented — who have positively contributed to U.S. society through heroic or lifesaving acts."

In announcing the task force to the House of Representatives, Polis highlighted three examples of stories SAINT will focus on.

There's the story of Antonio Diaz Chacon, an undocumented immigrant who saved a 6-year-old girl from a child abductor in 2011. In 2007, Jesus Manuel Cordova was crossing the Mexico/U.S. border when he found and saved a 9-year-old boy lost alone in the desert. Also in 2007, Dr. Alfredo Quinones-Hinojosa, an undocumented immigrant living in Baltimore, became a world-renowned brain surgeon.

The creation of Polis' task force simply shines a light on Trump's unfair characterization of immigrants as a whole, providing more than one narrative of immigrants' contributions to America. Polis' goal, as he's made clear over the past several years, is to find a comprehensive immigration reform program that works for all Americans, regardless of where they were born.

You can watch Polis announce SAINT in the video below and read more about the program on his website.

Acts of kindness and compassion are always inspiring. A veterinarian gave a different spin on the phrase "if you can't beat 'em, join 'em".

The poor little pup in this video walked into this shelter with a history of being abused. He was so traumatized that he wasn't eating. The vet treating him wasn't sure what to do, so he decided to book a table for two: a the dog's place. It is not clear whether he got an official invite from the canine in question, but he felt pretty safe about showing up unannounced. He walked into the cage and sat down next to the dog. With his back up against the corner of his new (and hopefully temporary) domain, the rescue stared apprehensively at his human guest. The vet presented a dog dish with food and put it in front of the dog. The frightened pup just looked at the dish and made no attempt to eat. Then he broke out another dog dish identical to the one he just gave to his four-legged patient and started eating out of that bowl. And then came the turning point.