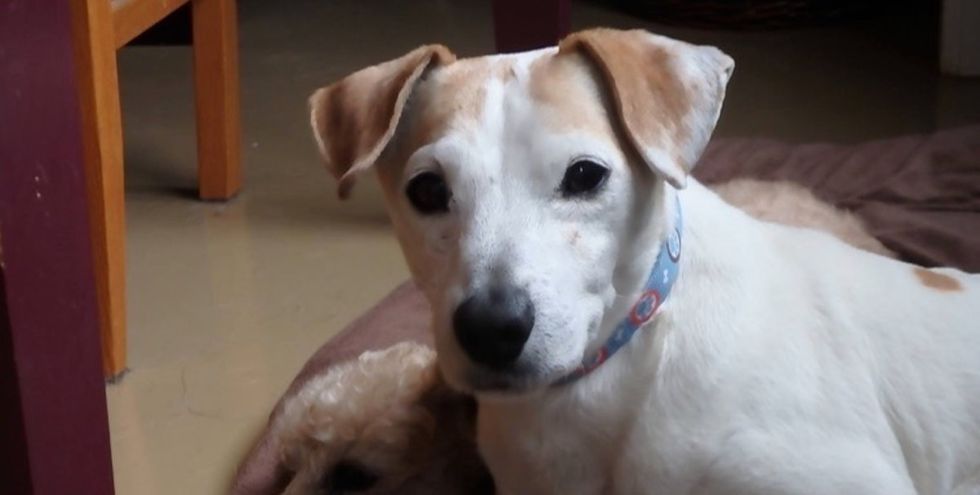 This is Jack, a 13-year-old Jack Russell terrier.

His owner gave him up to a shelter. At first, it seemed like he was lucky: He was adopted that very same day.

But 48 hours later, his new family returned him because he had some medical issues they didn't want to deal with.

He was homeless — that is, until Silver Muzzle Cottage took him in.

Kim Skarritt-Nelson created Silver Muzzle Cottage after realizing just how many old dogs were in shelters waiting for new homes.

She ran Bowsers by the Bay, a dog boarding and social rehab facility, and through her work, she had connected with a few local rescues on social media.

"I started seeing that there were a lot of these really old dogs needing homes and I didn't understand that at all," she says. "It was a concept that I just couldn’t grasp. Why would a 14-year-old dog need a new home?"

Some of these dogs had lived their whole lives with a person, but when their owner died, they had nowhere to go and no one to take them.

Others, like Jack, had been relinquished to shelters by owners who didn't want to — or couldn't — care for them anymore. Others still were found as strays, like Penny, abandoned along a road somewhere.

People usually want a puppy or at least a young dog when they decide to bring a dog home, and that's why those are the ones that almost always go home first. Old or sick dogs can spend years waiting for a new home — or even be euthanized in overcrowded shelters.

It bothered Skarritt-Nelson that these older dogs had nowhere to go to live out their remaining life with love and dignity. So she renovated one of the buildings on the Bowsers by the Bay property, converting it into a living space for dogs — complete with couches, pillows, and even a fake fireplace so that it resembles a home instead of a traditional shelter — and officially opened Silver Muzzle Cottage, a rescue and hospice for homeless senior dogs.

The interior of Silver Muzzle Cottage looks more like the living room of a house than it does a dog shelter.  Image via Kim Skarritt-Nelson.

It is the only organization of its kind in her state and one of a few in the country, according to the Detroit Free Press. Even by animal rescue standards, Silver Muzzle is a very different kind of refuge.

Since it opened its doors two years ago, Silver Muzzle Cottage has helped more than 70 senior or sick dogs in Michigan.

When they get a call, they screen them to make sure the dogs meet their age requirements and, if possible, try to place the dog in a home first. Some of those dogs do better in the quiet of a home with a family, she says.

If not, the dogs come to the cottage to await adoption. Some, like the 140-pound great dane-mastiff mix named Mongo, will simply live out the remainder of their lives at Silver Muzzle Cottage.

Mongo's owner relinquished him to Silver Muzzle Cottage on the condition that he stay at the cottage and not be adopted. He is 8, which is considered senior for such a large dog. Image via Kim Skarritt-Nelson.

"Just in case they never find a home, they will always have a home here with me," says Skarritt-Nelson.

The dogs are never alone at the cottage, thanks to a group of volunteers. "We ask the volunteers to help us give these dogs a life that they may never have had," says Skarritt-Nelson. "So that may include taking them down to the beach and letting them play on the beach, taking them for walks in the woods, getting them out and socializing with people in the community."

One of the Silver Muzzle Cottage dogs visiting a local nursing care facility as part of the rescue's "Seniors for Seniors" program. Image via Kim Skarritt-Nelson.

They spend the rest of their time snuggling and playing with the other dogs or hanging out with Skarritt-Nelson.

In fact, to take the extra step in making sure the dogs are never alone and never caged, she made the cottage her home too by moving into a small room at the corner of the house with her own three dogs.

She hopes she can continue to grow her network of volunteers and supporters so Silver Muzzle Cottage can expand and welcome more older dogs. Helping these senior dogs is her way of giving back to them — of recognizing that they once gave their lives to someone or a family, and that it's not their fault they are homeless now. Silver Muzzle Cottage is her creative way to help these dogs.

A little girl reading to one of Silver Muzzle Cottage's senior dogs. Image via Kim Skarritt-Nelson.

"The whole focus for us is making sure that the dog leaves this world with somebody, that they don't die alone, and to make sure that they know that when they left this world, they had somebody — somebody loved them, they mattered to somebody."

Want to volunteer or help Silver Muzzle Cottage in some other way?  Reach out to them via their Facebook page for more information.