"I cannot spirit away her teen troubles. But I can give her a break." 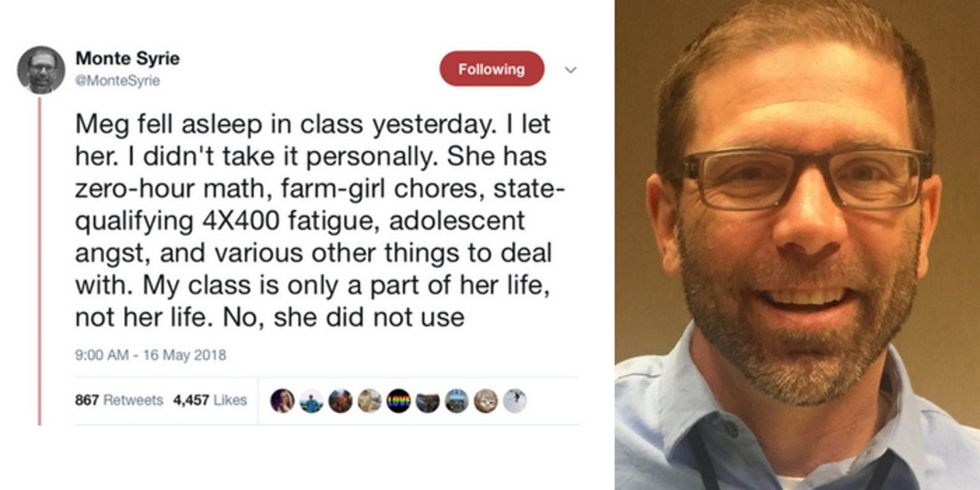 Syrie pointed out that sometimes we have to "trust our instincts, even if it goes against the grain."

Meg is a good student with a lot on her plate. She takes a zero-hour class before the normal school day and does farm chores before that. She runs track. And she's a teenager, with all of the social, academic, and life pressures that go along with it.

And she's not alone. During the school year, teens report higher levels of stress than adults, and many students report feeling exhausted trying to keep up with it all.

"I think too often the biggest thing that people forget about high school students is that they are kids," Syrie says. "They're kids — kids who are having to grow up way too fast and are having way too much pressure put on them, in and out of school ... even for our best and brightest, that pressure gets to be too much."

Syrie's compassionate story resonated with people because we've all been in a position of needing a little grace.

Syrie's tweets continued, exemplifying how teachers can show kindness and understanding to students. He pointed out, "I can't offer Meg a math class later in the day. I cannot feed her horses ... I cannot run 6 race-pace 300s for her. I cannot spirit away her teen trouble. But I can give her a break."

Syrie says he tries to be that responsive to all of his students. "Because I firmly believe that one size fits all is madness, I adjust to each student, trusting my instincts, trusting what I know," he says. "Regardless of our responsibilities, life is hard, and we all need some grace now and then."

Syrie says he's had a few negative comments, but overwhelmingly the response has been positive from both students and teachers.

Syrie has words for those who say that allowing a student to sleep in class doesn't prepare them for the "real world."

Some may question whether letting a student sleep in class without consequence is a good idea. Syrie has a response:

"We are not working in factories, stamping out standardized products," he says. "We are helping young humans — unique individuals — learn about themselves and their worlds. As such, when our young humans face the inevitable pressures of growing up, we need to respond with empathy."

You can read more about the way Syrie is rethinking education on his website.