This son sent his mom a life-size cutout of himself. She got the last laugh. 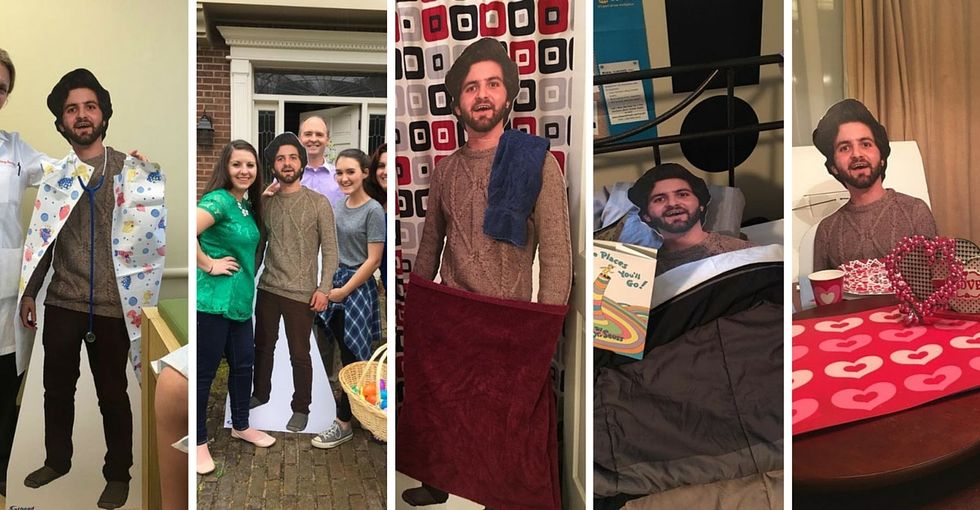 This article originally appeared on 03.30.16

Dalton Ross wanted to make sure his family didn't miss him too badly while he was studying abroad in London.

To help them cope, the 22-year-old Tennessee native did what any selfless college student would do: He sent his mom a life-size cutout of himself.

All photos courtesy of Dalton Ross, used with permission.

"I thought maybe they'd put it in the living room corner until I got back to remember I exist," he explained about the cutout, which came with a short note: "You're welcome."

But like any clever mom, Susan Talley couldn't just stash this amazing piece of work away when it arrived about two months ago.

No, no — she had better plans in mind.

Talley decided the cardboard version of her son could be a great companion "while the real one is in Europe." So she brought him along with her to events, like basketball games ...

Can you spot cardboard Dalton in the stands?

He enjoyed playing with a furry, four-legged friend in the sunshine.

And he appreciated a good bedtime story, just like the rest of us.

The photos of fake Dalton are spreading like wildfire.

Without showing her son the photos first, Talley went ahead and uploaded them to Facebook. And after Dalton shared them on Imgur — explaining his mom "seems to be entertaining herself" while he's gone — the story sent the Internet into a buzzy frenzy.

"The attention is crazy," Ross told Upworthy, noting the story has gained so much traction that a restaurant featured in one of the photos, O'Charley's, sent the family a gift card.

"I hope my mom's holding up all right," he said. "It's awesome though."

Fake Dalton has been to the batting cages ...

... and celebrated Easter with his family.

Although the viral reaction to the photos has been a bit nuts, Ross isn't all that surprised his mom was up for a good laugh.

"Oh yeah, my mom is very funny," he explained to Upworthy. And it's a good thing, too: Laughter can be a great tool in improving the quality of family dynamics and boosting a loved one's emotional health. (A student studying abroad should especially keep that in mind, considering being away from loved ones and familiarity can be tough.)

"We're a big family of jokesters."

Bravo, mom, for setting the bar very high ahead of April Fools' Day.

The 95-year-old's 'bold, creative decision' to die on Thanksgiving when the whole family was at her house led to this chaotic masterpiece.

A viral video tells a wild, oddly hilarious tale of a guy's aunt dying on Thanksgiving.

A loved one dying on a holiday isn't normally something to laugh about, but there are exceptions to every rule. This video is one of them.

TikTok user Darien (@dairy.n) shared a story about his family's Thanksgiving Day that is so gloriously bizarre and delightfully real, it's hard not to laugh, despite the fact that it's about his aunt dying. The fact that he tells the tale in the style of a "One thing about me" rap is extra hilarious, and judging by the comments of some of the 6.7 million people who've watched it, it's struck people's funny bones.

Dark humor? A little bit. But his aunt was 95 and she died of natural causes, which helps the hilarity feel not quite so inappropriate. She also apparently had a fabulous sense of humor that she used to cope with her own difficulties throughout her life, so the video is more like a fitting tribute than a what-the-heck storytelling.

Odds are you’ve probably seen those Lensa AI avatars floating around social media. You know, the app that turns even the most basic of selfies into fantasy art masterpieces? I wouldn’t be surprised if you have your own series of images filling up your photo bank right now. Who wouldn’t want to see themselves looking like a badass video game character or magical fairy alien?

While getting these images might seem like a bit of innocent, inexpensive fun, many are unaware that it comes at a heavy price to real digital artists whose work has been copied to make it happen. A now-viral Facebook and Instagram post, made by a couple of digital illustrators, explains how.

Keep ReadingShow less
art
Get stories worth sharing delivered to your inbox
By signing up you agree to Upworthy's privacy policy.
Trending Stories
kindness
Joy