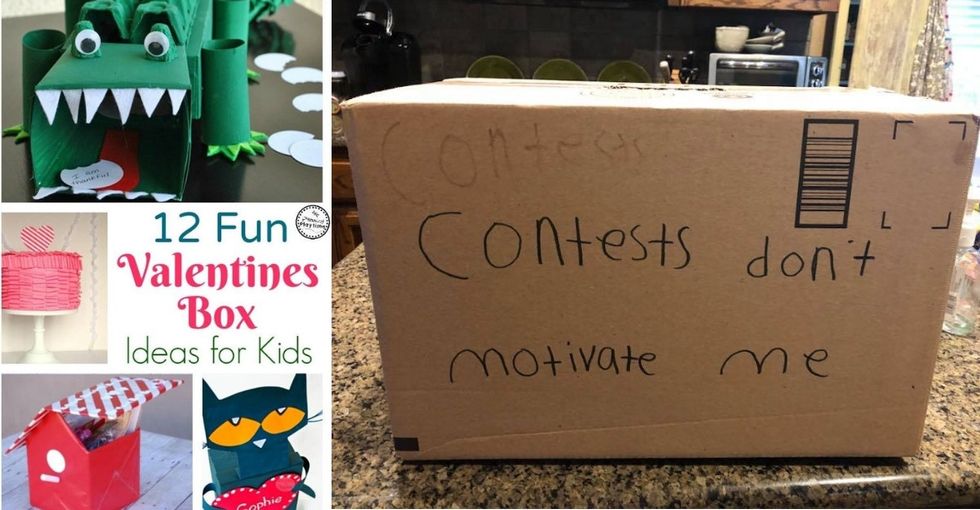 This 10-year-old's Valentines Box has turned him into a viral hero.

In the age of Pinterest, where crafts have been taken to new, barely achievable heights, to see a kid come up with their own unique idea is impressive enough. But 10-year-old Sawyer took it to a whole other level, and now people are clamoring for this kid to be their life coach.

Like many classrooms around the country, Sawyer's fourth grade class held a contest last year to see who could create the coolest box to hold their classmates' Valentines. Instead of pulling out the colorful scrapbook paper, scissors, glue, and glitter like most kids, Sawyer grabbed a basic packing box and a black marker.

He cut a slot in the top of the box. Then, in printed letters, he wrote on the plain brown side of it, "Contests don't motivate me."

And that, folks, is how you earn the admiration of witty, wry, cynical, and non-crafty people everywhere.

Teliho shared a photo of the box on her Facebook page and says she burst out laughing when she first saw it.

Sawyer's mom, Beth Teliho, says Sawyer's box was hilarious, but not unexpected from her witty son.

"I literally doubled over laughing when he brought that box down," she told Upworthy. "I think he was a bit surprised I'd let him take it to school, but I was all for it because I thought it was honest and clever!"

Teliho is the award-winning author of the young adult novel "Order of Seven." And now Sawyer has his own award—for "Most Unexpected" in his class's Valentines box contest.

DYING 😂🤣😂😆There’s a contest at my 10yo’s school for best Valentine’s Day box. This is what my child made. I love him so much right now 🤣😂*edited to add* He freaking won “most unexpected” LMAO

"DYING," Teliho wrote in the photo caption. "There's a contest at my 10yo's school for best Valentine's Day box. This is what my child made. I love him so much right now." She later edited the post to add, "He freaking won 'most unexpected' LMAO."

Kids like Sawyer give us hope in a world where too few people are willing to question established norms.

Sawyer's box isn't just a witty dismissal of silly contests. It's a sign that he's not afraid to stand out, not afraid to buck the system, not afraid to participate in a way that upends people's expectations and wins people's hearts at the same time.

Teliho says this is par for the course for her son. "He's extremely witty and doesn't hold back....ever," she says. "Most of all, he loathes being forced into anything. He's very much his own person, which is admirable AF! I wish I had been that sure of myself at that age."

The responses from Sawyer's classmates and school community members were extremely positive, Teliho adds. He also started a trend. "The next day was pajama day, and a boy showed up in a t-shirt where he'd written 'Pajamas don't motivate me,'" says Teliho.

This kid is going places, I tell you. And a whole bunch of us are eager to tag along with him.