This comedian hilariously brought up knives to make a great point about guns.

Cameron Esposito will hear you out; she just may not agree. 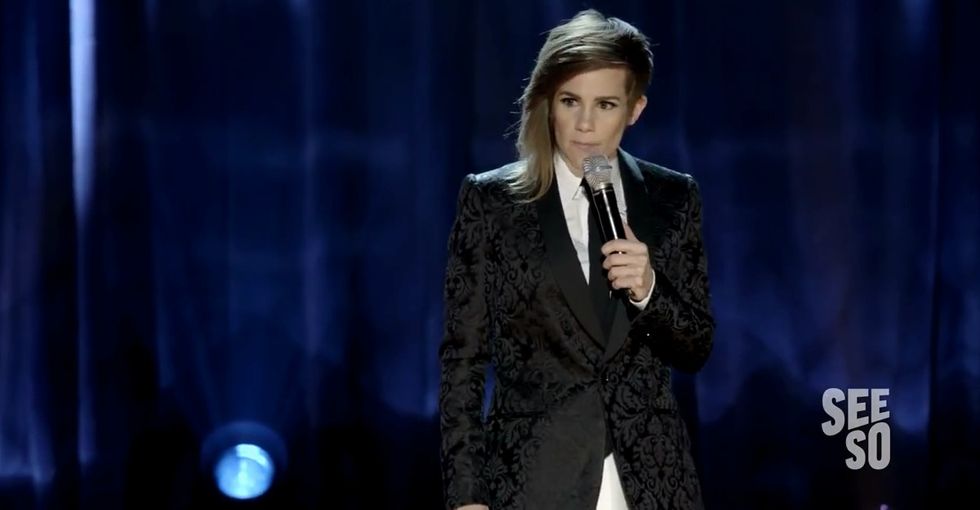 Comedian Cameron Esposito will not be getting a gun.

And for good reason. Multiple studies have shown that guns kept in homes are far less likely to be used to provide self-defense than they are to be involved in an accidental shooting, criminal act, or suicide attempt.

See? I told you. Not getting a gun. GIFs from Cameron Esposito/Seeso.

In a clip from her upcoming special "Marriage Material," Esposito tackles gun culture.

Specifically, she takes aim (pun intended) at the idea that having a gun in the home is a great way to keep your house and family safe when — as mentioned above — removing the gun from your home is one of the best things you can do if you're genuinely concerned about safety.

And she's got a great point. Between December 2012 and December 2013, more than 100 children were killed in unintentional shootings — with nearly two-thirds of those shootings happening in the home or vehicle of the victim's family.

Accidental shootings are no joke, and that's why Esposito had to make it one.

On stage in the past, she's come to the defense of Planned Parenthood, so she's no stranger to tough topics.

"Standup is a language and a way of processing the world," Esposito says. "My interest — what I find to be the whole point of my being on this planet — is using standup to get at and digest the things that make us raw and separate and united and furious and resilient."

Rather than cutting off communication with those who disagree with us on this issue, Esposito thinks we need to increase it.

In one of her shows, Esposito encountered a man in the front row who opened her eyes to the importance of a clear dialogue between people on both sides of the issue. The man — former military, security worker at Columbine High School, has a concealed carry permit — engaged in an open and honest discussion with Esposito on the topic of guns. And while neither of them may have changed their minds on this complex issue, at least they heard each other's point of view.

"Speaking with him — really trying to understand his experience and his position as a gun owner — was the best part of that show for me," she tells Upworthy. "I truly believe stronger background checks would protect gun owners just as much as they would protect non-gun owners because we are all better protected when deadly objects — cars, planes, guns — require operational training, but I learn exactly how to make my case for that better through conversations like the one I had with him."

Check out the gun control clip below.