This chef is much bigger than her 'Lemonade' cameo, though that was pretty great too. 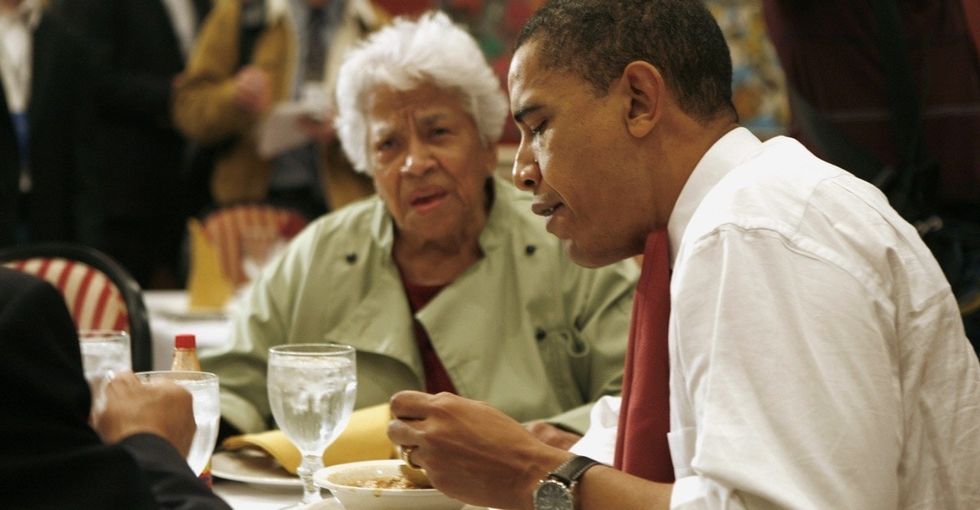 Where were you when Beyoncé made a tall glass of "Lemonade" and shared it with the world?

The superstar's highly anticipated visual album "Lemonade" debuted in mid-late April, but not before her film of the same name premiered on HBO. Through haunting imagery, the captivating poetry of Warsan Shire, and, of course, the music of Queen B herself, fans were gifted a cinematic love letter to black womanhood.

A sisterhood of women brought the film to life, as "Lemonade" featured cameos from some of the biggest names in Hollywood.

And while her cameo was brief, one star shone a little brighter than the rest — Leah Chase.

At 93 years old, Chase is still a force of nature, cooking, inspiring, and changing lives for the better. Here are six reasons to celebrate this living legend.

1. Her gumbo fueled the leaders of the civil rights movement.

Dooky Chase, the restaurant Chase runs with her husband Edgar "Dooky" Chase Jr., has been a New Orleans staple since 1941. The restaurant was one of the few high-end establishments serving black clientele and quickly became a hot spot for mixed-race groups to make plans for advancing the civil rights movement. Meetings like this were illegal at the time, and someone even threw a bomb through the window of the restaurant. But it didn't stop Chase or the meetings. Hot bowls of gumbo were served to the likes of Thurgood Marshall, Oretha Castle Haley, the Rev. A.L. Davis, and even Martin Luther King Jr. in the restaurant's upstairs meeting room.

"I feel like in this restaurant we changed the course of the world over bowls of gumbo," Leah Chase told The Times-Picayune. "That's how we always did the planning — over gumbo."

2. The restaurant (and Chase) still draw crowds and have served many famous faces since then.

From Duke Ellington and James Baldwin to President George W. Bush and the entire cast of "Top Chef," Leah Chase has served the latest and greatest in her restaurant.

Oh, and — true story — she once admonished not-yet-President Barack Obama for adding hot sauce to her gumbo before trying it.

"He was campaigning. Dr. Norman Francis (Xavier University president) brought him to me. ... He was a very aggressive young man, I thought. I thought, 'You don't have a chance. No way in the world is this black man going to beat this white woman.'

3. When Hurricane Katrina left her with nothing, she didn't give up.

The storm flooded he restaurant with more than five feet of water. She lost everything. Her home was destroyed too. For many people, a devastating setback like that, especially in your 80s, would surely mean retirement. But not for Chase.

Just two years after Katrina, Chase and her husband were able to re-open the restaurant. See what I mean about a force of nature?

Chase stands with members of Women of the Storm in Washington, D.C., to bring attention to the need for rebuilding and preservation of the Gulf Coast. Photo by Chip Somodevilla/Getty Images.

4. Her restaurant doubles as a gallery for black artists.

Chase is a vocal advocate for African-American artists, and the walls of the family restaurant serve as a gallery of sorts, showcasing the work of world-renowned and lesser-known black artists. The large and stunning collection is considered by many to be one of the best private collections in New Orleans.

Oh, and speaking of galleries, Chase has one named for her at the Southern Food and Beverage Museum. Because of course she does.

5. Not to mention Chase is a queen and a princess.

For her prowess in the kitchen, Chase is often recognized as the Queen of Creole Cuisine, but it took a little help from Disney to make her a princess.

Yes, Chase was the inspiration for Tiana, the main character from Disney's 2009 animated feature "The Princess and the Frog."

Anika Noni Rose, the voice of Princess Tiana, arrives for the world premiere of Disney's "The Princess and the Frog." Photo by Robyn BeckAFP/Getty Images.

She still runs the kitchen at Dooky Chase. In fact, the family has limited the restaurant's operating hours to "protect Chase from her own work ethic."

For her hard work and masterful execution, she's taking home the James Beard Foundation Lifetime Achievement Award in the summer of 2016, a culinary honor bestowed to the only the very best.

And she's still a major philanthropist and inspiration in New Orleans.

Just at the end of April 2016, she served up some fine food and a dish of wisdom to a group of African-American boys as part of the Silverback Society's VIP luncheon.

"Lemonade" could have been an hour of Chase making gumbo, and it still would've been overflowing with black girl magic.

Because she's a chef. She's an activist. She's just that good.