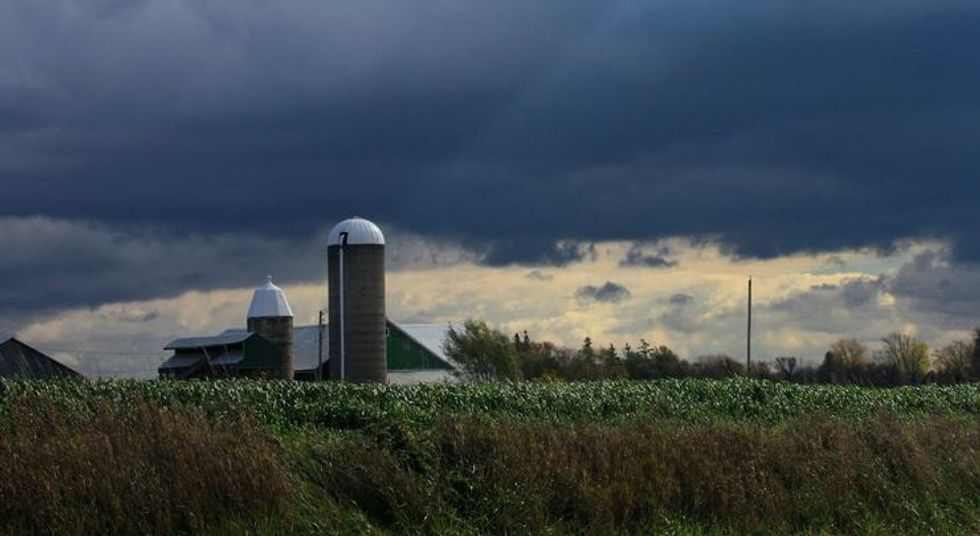 Since humans began farming over 20,000 years ago, we have had to fight the weather, seasons, and pests while creating irrigation systems to ensure the crops have water.

80 Acres Farms is currently building an indoor farm in Hamilton, Ohio, just outside of Cincinnati, that will provide 150,000 square feet of controlled environment agriculture (CEA).

The CEA farm will rely on energy-efficient LED lights for its plants to thrive in a climate-controlled environment. While traditional farmers are tied to the seasons, CEA farming allows crops to grow 365 days a year without interruptions.

Imagine a world where your child craves a tomato more than a piece of candy. Imagine being asked for fresh, nutritious food every day. ⠀⠀⠀⠀⠀⠀⠀⠀⠀ That is the world we are creating. Join us. ⠀⠀⠀⠀⠀⠀⠀⠀⠀ ⠀⠀⠀⠀⠀⠀⠀⠀⠀ #80acres #abetterway #verticalfarming #innovation #jointhemovement #daretobedifferent #futureoffood #eatgreen #eatlocal #indooragriculture

Growing indoors virtually eliminates the need for pesticides, so the food is healthier and producing it doesn’t pollute soil and waterways.

The indoor environment allows crops to be stacked vertically, so more can be produced in a limited space.

“80 Acres grows products much faster than in the traditional outdoor environment or even in a greenhouse environment,” 80 Acres Farms co-founder, Mike Zelkind,  told iGrow.

“We can control all the factors, like CO2 levels, and when and how much to deliberately stress the plant to get the right level of nutrition and flavor," he continued.

“Plants only take up what they need and the rest is recirculated in the system. To reduce our carbon footprint, we strive to use primary renewable energy sources and travel less miles with our food," Haders continued.

The indoor farm should be completed by the end of 2018 when it will begin growing greens such as herbs and kale for local retailers and distributors. Until recently, Generation X has been sitting back and watching as Millennials and Boomers eat each other with an amused, non-confrontational attitude. But recently, Millennials and Gen Z became aware of their presence, and dubbed them "The Karen generation."

They seem to be embracing the Karen thing. 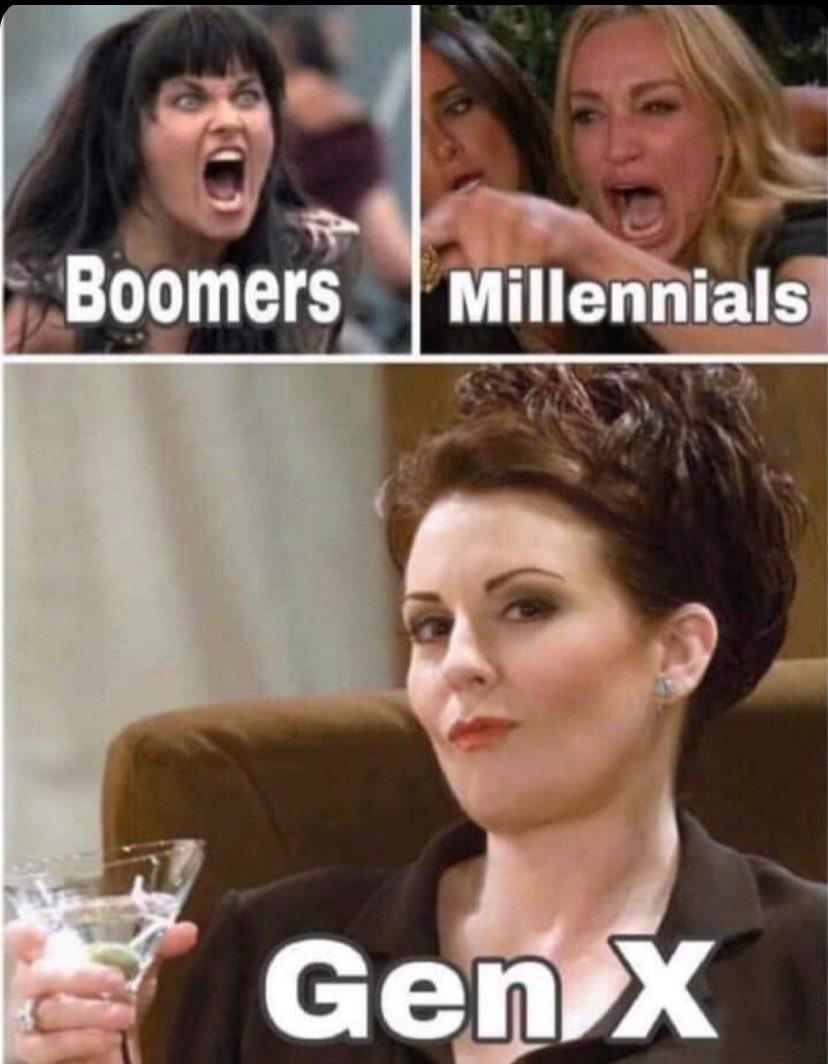 While I"m pretty sure the "Karen" thing is not complimentary — as BuzzFeed puts it, it's meant to communicate someone who is "the middle-aged white mom who is always asking for the manager and wondering why kids are so obsessed with their identities," lots of people landed on a different Karen to represent the generation: the martini-guzzling, wise-cracking Karen Walker.

Well [expletive] me gently with a chainsaw, she's right. The 1980s cult classic starring Winona Ryder and Shannen Doherty really is the Mean Girls of the '80s and a much better term than Karen

The disdain is mutual... 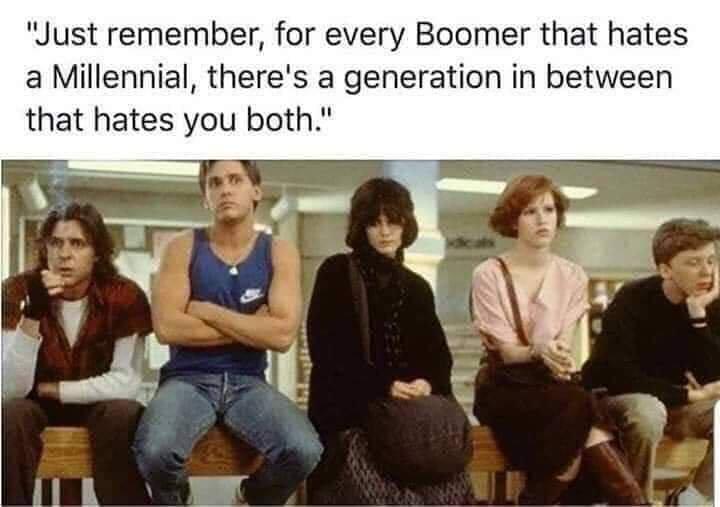 Most of my Gen X friends have Gen Z kids and they are intergenerationally very chill with each other. However, Gen X is the generation most likely to have Boomer parents and younger millennial kids, and this meme seems to be resonating a bunch with Xers of a certain age.

A lot of Xers are enjoying the "OK boomer" squabble. The media tends to ignore Generation X as a whole — as a few tweets coming up demonstrate — and this pleases Gen X just fine. After all, they're used to it. They were latchkey kids whose parents both worked long hours, so they're used to being somewhat neglected. Perhaps Gen X's blasé attitude to the generation wars has something to do with being called "Slackers" for a full decade. Aside from this whole "Karen generation" blip, Gen X continues to be largely overlooked, and that fact — as well as their silent delight in it — is possibly one of the most Generation X things to happen to the class of 1965 to 1980.

Pay no attention to the man behind the venetian blinds. Back in the '90s, Gen X bore the same kind of criticism Boomers tend to heap on Millennials and Gen Z now. It's not necessarily that they want to watch a cage match. It's just they're so relieved it's someone else being called slackers and downers for a change. Although this chart doesn't list the generation names, the approximate age ranges are all there... except for a big gap between the ages of 34 and 54 where apparently no humans were born? Poor Gen X (and some elder Millennials) apparently don't have political beliefs worth examining.

Don't you forget about me... If Millennials are the "burnout generation," I guess Gen X is truly the invisible generation. I'm starting to feel inspired to write a science fiction novel where everyone born from 1966 to 1980 inhabits a totally different dimension.

There are perks to being invisible... Being overlooked can be an advantage when you just want to sit in the corner and be immature. Gen X spent all of the 90s being told they were immature slackers, and in their 40s, a lot of them are really leaning into that description, because what does it matter?

"No one cares what we think anyway..."

This GIF of Janeane Garofolo mocking her classmates at the high school reunion is basically a whole Gen X mood and definitely captures how a lot of this generation caught in the middle feels about the "OK boomer" wars. Before Brené Brown was telling us all how to dare greatly, Gen X got their inspirational advice from a different kind of TED and his pal Bill, who taught us all how important it is to learn from history and be excellent to each other.

Too late and yet too early. Romance — or getting lucky — was never easy for Generation X. They were the generation most impacted by the AIDS epidemic when it comes to anxiety about casual sex. Whereas Boomers had the free love of the late '60s, Gen X was about safe sex, which usually meant less sex. And even when having safe casual sex, singles in the '90s had to meet people the old-fashioned way or, if they did meet online, they felt shame over it. Now online dating is the norm.

When Gen X replaces the Boomers. This is probably an optimistic view — because the truth is there are "Boomers" in every generation, and many of them tend to find their way into powerful positions. Let's call this a best case scenario, though. There is no generation more over it than Gen X. They are ready for the apocalypse, but don't expect them to, like, help or anything!

From Your Site Articles
Related Articles Around the Web
gen x
Get stories worth sharing delivered to your inbox
By signing up you agree to Upworthy's privacy policy.
Trending Stories