They put her in solitary confinement for 7 months. Before that, she was in a prison full of men.

Sadly, Johanna's experience is not the only one. Trigger warning: Graphic descriptions of sexual assault. 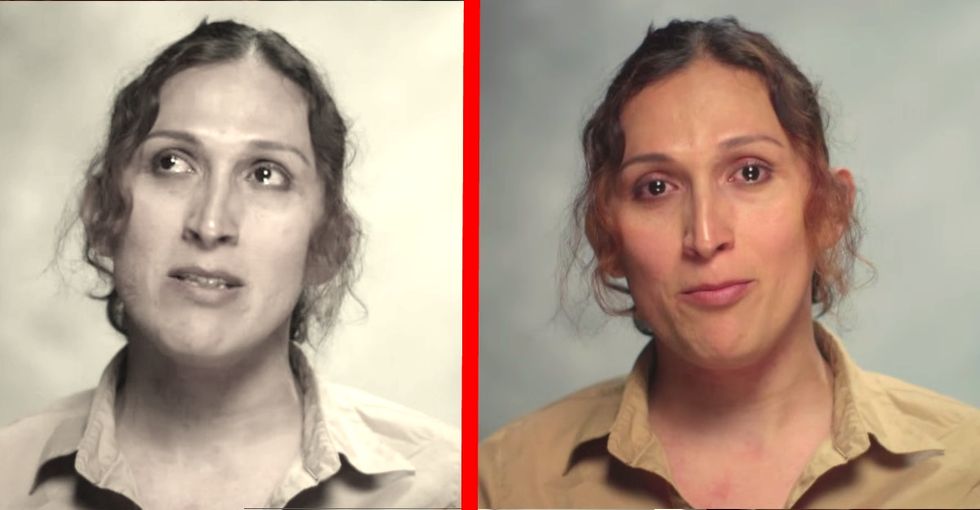 At 16, Johanna Sanchez was brutally raped by several men in a field in El Salvador.

One of the men said to her, "Faggot, isn't this what you like?"

Johanna decided she had to get out of El Salvador to escape danger, so she ran away to the United States, "where she heard life for women like her would be better."

Why was Johanna's life in danger? And why did the man call her a homophobic slur?

Because, while Johanna is a woman, she is also transgender. And because of her gender identity, Johanna's life is in constant danger.

This makes things more complicated. Because, unfortunately, she didn't find help. Instead, she found herself in the immigration detention system.

Johanna was placed in a jail — with men.

...being locked up was a nightmare. She was beat up by a male cellmate. Then, guards told her the only safe way to house her was solitary confinement. There, she sat in a 6-by-13-foot cell for 23 hours a day with no human contact and no view of the outside world. She waited for an asylum decision for seven months.

Johanna decided that going back home was far better than being locked up in solitary confinement.

She was deported to El Salvador.

Almost as soon as her plane landed in the San Salvador airport, more nightmares followed.

It didn't end with the gang members. Watch her explain in this video below. (Warning: It's graphic).

Her experience is not an isolated incident.

Trans women of all backgrounds face intolerance everywhere they go. When they end up in the prison system, it only gets worse. And if they're undocumented? That's a triple whammy.

In its investigation, Fusion discovered:

1 out of every 500 detainees in immigration detention is transgender.

1 out of every 5 victims of confirmed sexual abuse in detention is transgender.

So while transgender individuals make up a very low number in ICE detention, they are hugely overrepresented as victims of sexual assault.

The National Center for Transgender Equality has more startling statistics about undocumented transgender immigrants (many of whom come to the U.S. to escape prejudice in their home countries).

1 in 4 undocumented trans people reported physical assault on the job.

39% of undocumented transgender people have lost jobs due to bias, compared to 27% of transgender U.S. citizens.

21% of undocumented trans people have been evicted at least once due to bias, which is twice the rate of eviction for the general trans population.

This bias against transgender people is happening in the U.S. even before they are detained. And on top of that, the U.S. Immigration and Customs Enforcement can legally place transgender women in with men, where they are likely to face physical danger because other inmates — or prison guards — see their gender identity as "unnatural."

So, we have to ask ourselves: Why are we letting this happen in the U.S.? Why are we making life horrible enough for people like her that she decided to go back to El Salvador? Why aren't we providing refuge to more people like Johanna?