The oldest whales on the planet are more ancient than 'Moby-Dick' and have the harpoons to prove it. 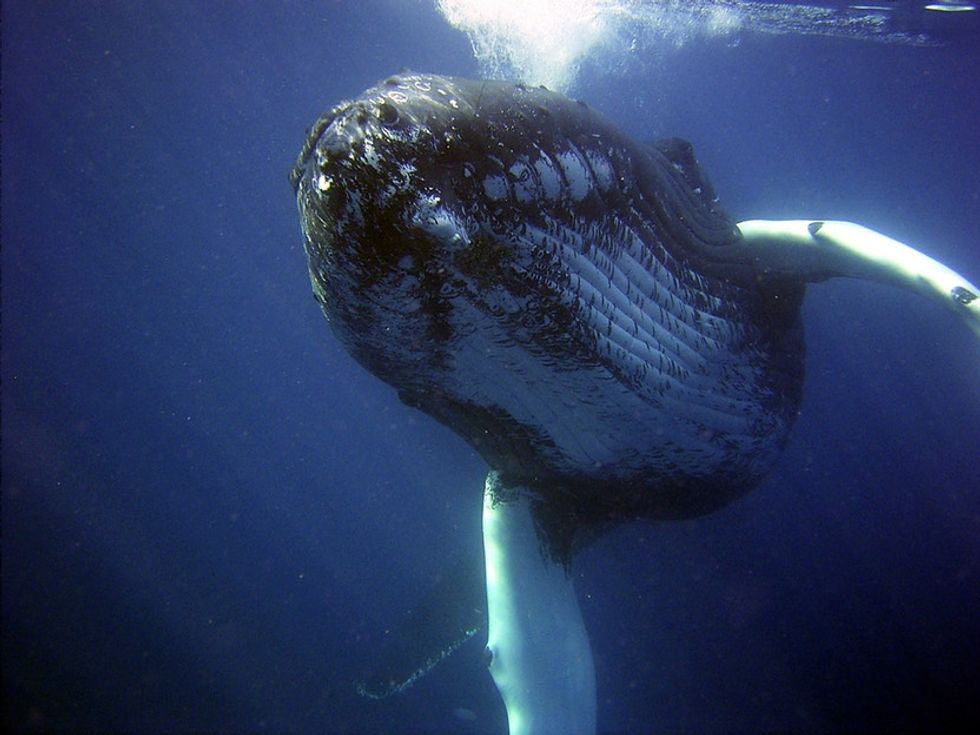 You're probably familiar with the literary classic "Moby-Dick."

But in case you're not, here's the gist: Moby Dick is the name of a huge albino sperm whale. (Get your mind outta the gutter.) There's this dude named Captain Ahab who really really hates the whale, and he goes absolutely bonkers in his quest to hunt and kill it, and then everything is awful and we all die unsatisfied with our shared sad existence and — oops, spoilers!

OK, technically, the narrator Ishmael survives. So it's actually a happy ending (kind of)!

Basically, it's a famous book about revenge and obsession that was published back in 1851, and it's really, really long.

It's chock-full of beautiful passages and dense symbolism and deep thematic resonance and all those good things that earned it a top spot in the musty canon of important literature.

There's also a lot of mundane descriptions about the whaling trade as well (like, a lot). That's because it came out back when commercial whaling was still a thing we did.

In fact, humans used to hunt more than 50,000 whales each year to use for oil, meat, baleen, and oil. (Yes, I wrote oil twice.) Then, in 1946, the International Whaling Commission stepped in and said "Hey, wait a minute, guys. There's only a few handful of these majestic creatures left in the entire world, so maybe we should try to not kill them anymore?"

And even then, commercial whaling was still legal in some parts of the world until as recently as 1986.

And yet by some miracle, there are whales who were born before "Moby-Dick" was published that are still alive today.

What are the odds of that? Honestly it's hard to calculate since we can't exactly swim up to a bowhead and say, "Hey, how old are you?" and expect a response. (Also that's a rude question — jeez.)

Thanks to some thoughtful collaboration between researchers and traditional Inupiat whalers (who are still allowed to hunt for survival), scientists have used amino acids in the eyes of whales and harpoon fragments lodged in their carcasses to determine the age of these enormous animals — and they found at least three bowhead whales who were living prior to 1850.

Granted those are bowheads, not sperm whales like the fictional Moby Dick, (and none of them are albino, I think), but still. Pretty amazing, huh?

This bowhead is presumably in adolescence, given its apparent underwater moping.

This is a particularly remarkable feat considering that the entire species was dwindling near extinction.

Barring these few centenarian leviathans, most of the whales still kickin' it today are between 20 and 70 years old. That's because most whale populations were reduced to 10% or less of their numbers between the 18th and 20th centuries, thanks to a few over-eager hunters (and by a few, I mean all of them).

Today, sperm whales are considered one of the most populous species of massive marine mammals; bowheads, on the other hand, are still in trouble, despite a 20% increase in population since the mid-1980s. Makes those few elderly bowheads that much more impressive, huh?

Southern Right Whales hangin' with a paddleboarder in the Great Australian Bight.

Unfortunately, just as things are looking up, these wonderful whales are in trouble once again.

We might not need to worry our real-life Captain Ahabs anymore, but our big aquatic buddies are still being threatened by industrialization — namely, from oil drilling in the Arctic and the Great Australian Bight.

In the off-chance that companies like Shell and BP manage not to spill millions of gallons of harmful crude oil into the water, the act of drilling alone is likely to maim or kill millions of animals, and the supposedly-safer sonic blasting will blow out their eardrums or worse.

This influx of industrialization also affects their migratory patterns — threatening not only the humans who depend on them, but also the entire marine ecosystem.

And I mean, c'mon — who would want to hurt this adorable face?

Whales might be large and long-living. But they still need our help to survive.

If you want another whale to make it to his two-hundred-and-eleventy-first birthday (which you should because I hear they throw great parties), then sign this petition to protect the waters from Big Oil and other industrial threats.

I guarantee Moby Dick will appreciate it.