The Minneapolis Mayor Took Pictures With Many Young Men That Day. They Only Gave Her Hell For One.

In November 2014, Minneapolis Mayor Betsy Hodges posed for a photo with a young black man who had been convicted before. The young man was volunteering as a canvasser at Neighborhoods Organizing for Change when the picture was taken.In the photo, the young man and Mayor Hodges pointed at each other. Soon, local media outlet KSTP did a story denouncing the mayor for "flashing gang signs with a convicted felon." (Note: Pointing at someone is not an indicator of gang affiliation.)That same day, Mayor Hodges took pictures with young white men, doing the same pointing signal. Curiously (or not), KSTP didn't call out those gestures as "gang signs."It's as ridiculous as it sounds. So social media decided to respond — with #FlashYourGangSign. 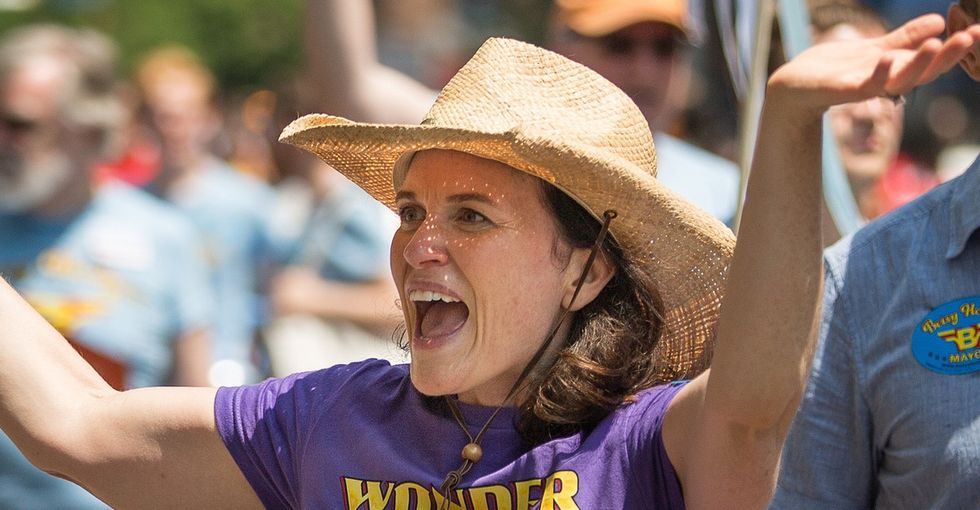 Daily Kos has pictures that the mayor took with other white men who were also pointing at her.

Dr. Nekima Levy-Pounds, a law professor, had a lot to say about this in a piece she wrote for the Minneapolis Star Tribune:

Rather than celebrating the young man’s involvement in civic engagement, the media decided to replay an age-old narrative of stereotyping a young black man from the inner city and branding him as a gang member. Because of the Mayor’s willingness to reach into the community and build connections, she too, was labeled in a similar manner and accused of having gang affiliations...

The constant portrayal of young black men as gangsters, thugs, and criminals can be seen nearly every night on the news or in newspapers in Minnesota and around the country. Undoubtedly these negative perceptions contributed to the untimely deaths of Trayvon Martin, Mike Brown, Jordan Davis, and countless other victims. The daily replaying of the narrative of blackness as evil, dangerous, and in the case of Mayor Hodges, contagious, has a cumulative effect on the American psyche and permanently warps our perceptions of the “other.” Indeed, nary can many of us walk past a young African American man without a whole host of racial stereotypes, prejudices, and fears coming to the surface.