The epicenter of Nepal's earthquake is near the Kathmandu Valley. Let's fly there on Google Earth.

In the spring of 2015, an earthquake that measured approximately 7.9 on the Richter scale hit the Gorkha district near the Kathmandu Valley area of Nepal. Thousands were killed, including climbers on Mount Everest. Sacred architecture, hundreds of years old, made of wood and brick, was unable survive.It's a tragedy. But let's look at Nepal beyond the tragedy. 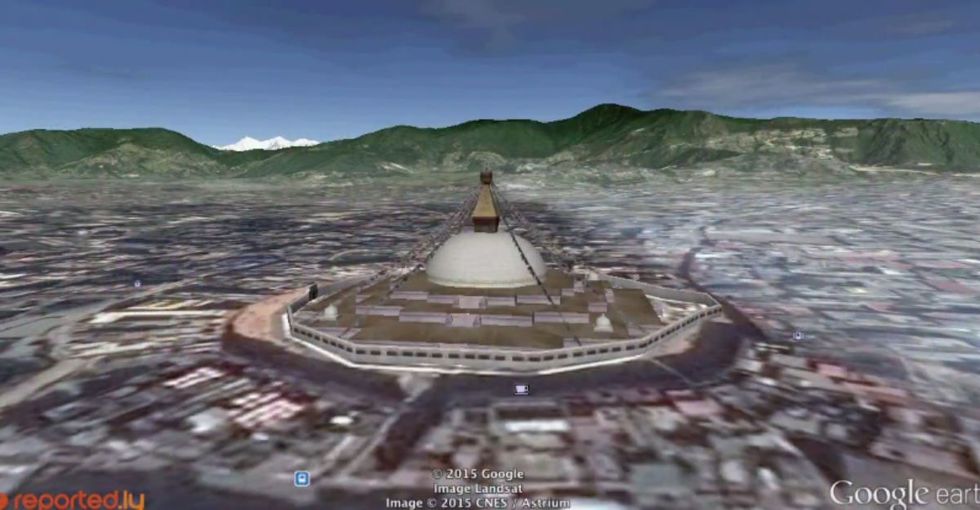 Nepal might seem really far from home. But just take a little visit, courtesy of Google Street View and Google Earth, and you might find yourself expanding your idea of "far."

Get a glimpse of temples and squares, some built as early as the late 1000's, as they were before the quake.

Nepal needs our attention right now, but it shouldn't be a nation defined by tragedy.

Let's get to know Nepal, our Earth-neighbors in the Himalayas, a little bit better.

The epicenter of the earthquake is near a place called the Kathmandu Valley. Let's explore the region.

It's in the foothills of the Himalayas, and as you can see, it's extremely densely populated.

First, let's go to Kathmandu Durbar Square, approximately 85 miles from the epicenter of the quake, which is near the western Ghorka region of Nepal. It's a city located in the foothills of the Himalayas.

This is interactive! Click around to see the square!

Next up, we'll travel southwest over packed neighborhoods — the area feeling the stress of the earthquake the most is a very densely populated one — to Patan Durbar Square, approximately 90 miles from the epicenter of the quake.

Next, to the Buddhist stupa of Boudhanath, approximately 93 miles from the epicenter of the quake. A stupa is a sacred place in Buddhism. These monuments are typically shaped like a mound and contain relics of Buddhist monks. Boudhanath is one of the largest stupas in the world.

It's looking at me.

It's so distinctive. Fortunately it only suffered minimal damage, but repairs are going to be extensive.

Unfortunately the city ofBhaktapur (approximately 96 miles from the epicenter) didn't fare as well.

Here it is in better days.

Lastly, let's head to Everest, also about 97 miles from the epicenter of the quake. There are some pretty things up there.

This monastery was destroyed by fire, and rebuilt in the 1990s. I like this story of healing, help, and rebuilding in Nepal pre-earthquake. I think it shows what's possible when it's clear that there is so much of that to be done in Nepal now.

This is the Khumbu Icefall, where the earthquake caused an avalanche that for some climbers proved fatal.

At Everest Base Camp, there is a memorial area that honors fallen climbers and sherpas.

As the dust of the earthquake settles, it appears that over 3,800 people were killed in Nepal, and the death toll is likely to climb.

Looking at these images of temples that are hundreds of years old, I'm just astounded that these magical places were even around as long as they were.

The Kathmandu Valley is an area that is prone to earthquakes, and yet these temples were there for so long. I can't help but get a little wistful for Google having captured these scenes. I might never have gotten to experience a 360 view of them if Google hadn't gotten involved. Crazy.

I don't know about you, but after this little Google trip halfway around the earth, Nepal seems less far away than before. The death toll is hitting home a lot harder.

Nepal may be far away in distance, but it doesn't have to be far from your thoughts.

For more on the area, including before/after photos, here's the Google Earth tour of the Kathmandu Valley: