Taylor Swift’s comments on politics have already had a historic impact. 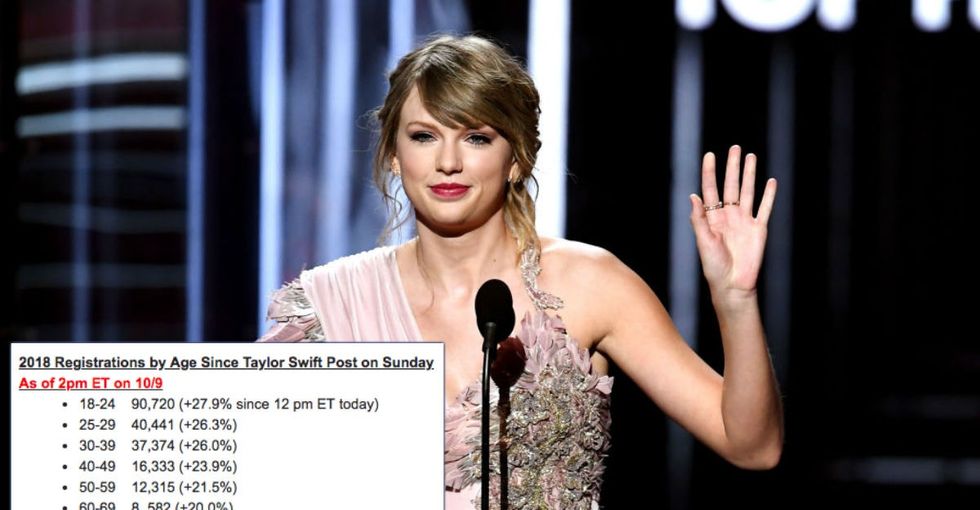 On Sunday, Taylor Swift made an incredibly rare foray into politics, endorsing two Democratic candidates in her home state of Tennessee.

More importantly, she made an impassioned plea to young people -- urging them to register to vote -- no matter which candidates they are supporting, writing on her Instagram page: “So many intelligent, thoughtful, self-possessed people have turned 18 in the past two years and now have the right and privilege to make their vote count.”

Celebrity endorsements are nothing new and they rarely have a measurable impact outside of coverage by the media and reactions on social media.

But in the case of Taylor Swift, the evidence suggests that in less than 48 hours, she has already had a historic impact on voter registration by sending her message to her more than 112 million fans.

The website vote.org shared information with Upworthy showing that more than 200,000 people had registered to vote since her post on Sunday.

As vote.org makes clear, it’s impossible to know just how many newly registered voters are coming directly from Taylor Shift but there is a direct, measurable spike in registrations since her Instagram post was first published and quickly went viral.

First, here’s a breakdown of the spike in voter registrations since Swift’s post on Sunday up through 2pm ET Tuesday, October 9:

“While there are several factors contributing this, a large majority of new registrations since Taylor’s post on Sunday have been from people between 18-29 years old -- about 102,000 out of the 240,00 total new registrations in less than 48-hours,” reads a statement from Vote.org.

In just over one week, October registrations have already surpassed all of those for September, which itself was by far the largest month of the year so far:

The numbers in Swift’s home state of Tennessee also saw a massive spike, offering further evidence of just how much her call for voter registration had a direct, measurable impact:

2018 Registrations in Tennessee (by month)

What’s maybe most impressive is that these numbers are still continuing to climb. Don’t be surprised if Swift makes another statement on this year’s midterm elections before November.