Students can't thrive if they're going hungry. This nonprofit has a genius solution. 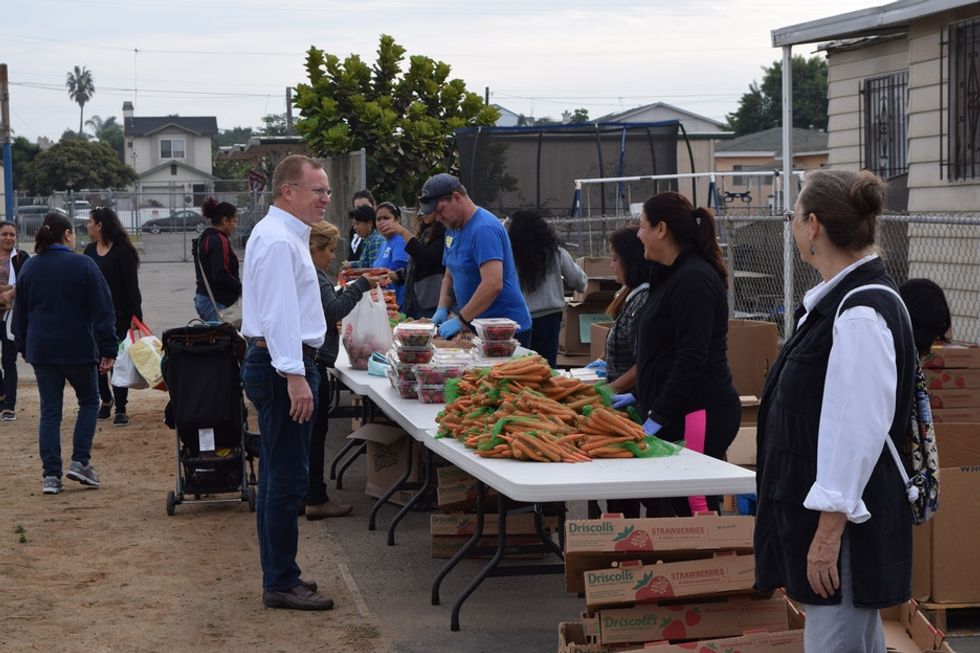 When you were in school, did you ever forget your lunch at home?

Since you'd planned on eating food from home, you probably didn't bring cash to buy a lunch, so you were stuck without anything to eat. Maybe you watched your classmates dig into their sandwiches, the smell of peanut butter and jelly making your mouth water. When your friends asked where your food was, you shrugged it off and told them you weren't hungry. But by the time you returned from the cafeteria, you were probably shifting in your seat, hoping nobody would hear your belly growling.

Cut to math class where you were likely struggling to pay attention long enough to solve even the simplest equation, too distracted by the emptiness in your stomach to concentrate. Maybe your teacher even caught you daydreaming, and you were too embarrassed to admit that you'd been thinking about what flavor granola bar you'd tear into once you got home.

But hopefully, you did actually get to eat that granola bar once you got home. Sadly, for many kids, that's not always the case.

In fact, for 1 in 6 children across the United States, hunger isn't just a matter of forgetting lunch when they leave for school.

These kids are dealing with food insecurity, which means they don't have reliable access to food.

In San Diego County alone, more than 400,000 people are considered food insecure, and of those people, 160,000 are children.

When that many children are affected, it really shows up in the classroom.

"When children are hungry, they can't perform in school," explains Vince Hall, CEO of the hunger relief organization Feeding San Diego. "They're not thinking about arithmetic, about literacy, about geography. They're thinking about being hungry."

While you might think fixing food insecurity is as simple as making school lunches affordable, addressing the problem is actually much more complicated than that.

The reality is that lunch isn't the only meal that struggling families have to worry about, and the cost of food isn't their only obstacle. When nutritious food isn't readily available, it also takes time and transportation costs to track it down. For struggling families, overcoming those obstacles can feel impossible, which usually leads to someone going hungry.

"You have mothers that are skipping their own meals to put food in the mouths of their children," Hall says.

That's why Hall and his team at Feeding San Diego are tackling all sides of the problem.

Through Feeding San Diego's Feeding Kids initiative, they make nutritious food accessible by partnering with sites such as elementary schools, churches, and community centers and distributing fresh food to the families there.

"When parents are coming to take care of their kids' academic needs, they can also take care of their families' nutritional needs," Hall explains. In other words, rather than spending money to get to a place with healthy food, families don't have to go out of their way — the food is right at the school. And best of all, it's free.

Plus, since they bring the food directly to the schools, Feeding San Diego doesn't have to spend resources on its own storage facilities, which cuts down on costs and allows it to spend more directly on the services offered to families in need.

For example, at Bayside Elementary School — located in Imperial Beach, one of the poorest areas in San Diego County — Feeding San Diego opened a school pantry in December 2017 that essentially gave kids and their families their own version of a farmers market.

Boxes and crates full of food were set up on the school's front lawn farmers-market-style, complete with reusable tote bags. Each family received about 20-25 pounds of food, including organic pasta, canned goods, and, of course, fresh produce straight from local farms.

Thanks to Feeding San Diego, families are already experiencing some promising results.

Feeding San Diego's surveys report that, among families participating in pantry sites, 88% report healthier eating behaviors such as eating more fruits and vegetables and preparing more food at home. Plus, 52% of parents reported improvements in grades and attendance, which should come as no surprise since having food to eat boosts mental health, concentration, and cognitive development.

A school pantry can also change interactions between parents and administrators, Hall says, and help parents feel like valued members of the community. One principal told Hall that he's grateful to have moments with parents that aren't just about discipline or problems with students.

"There's smiles, there's handshakes, there's hugs," he says. "There's an incredible bonding that's going on between the families and the school staff … that brings a much more human connection."

Hall says he's even witnessed tears from parents who are relieved about being able to feed their kids nutritious food without breaking the bank.

All families deserve access to nutritious food. With creative ideas like food pantries, we can make that possible.

For the low-income families who need fresh food resources the most, it's touching to have an organization like Feeding San Diego recognize the obstacles in front of them, and give them the chance at the healthy living they deserve.

And with greater awareness of what it takes to keep families fed, hopefully we'll be seeing more endeavors like this popping up all over the country in the years to come.