STI shaming is a real thing, and it's not cool. Here's one woman's story.

She's overcoming shame and stigma in a big way. 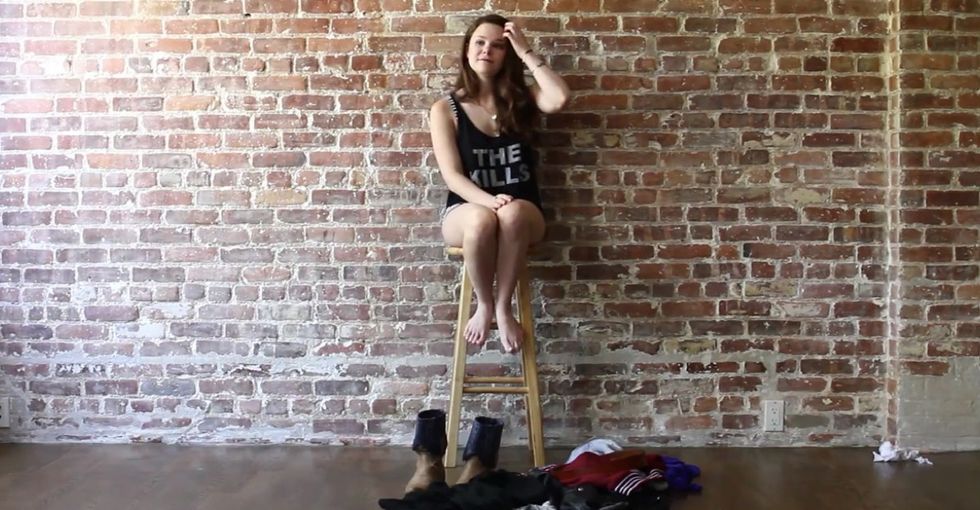 What do you know about STI stigma? A new video shines a light on the work one activist is doing.

You might have heard about the "What's Underneath Project," a video series by StyleLikeU. Each video features people who, over the course of the video, take off articles of clothes while sharing stories about loving and accepting themselves.

The series has featured rock stars and actresses. Now, it features Ella Dawson.

Ella Dawson is a fearless advocate in the fight against stigma — in her case, the stigma surrounding STIs.

Ella has herpes. She's OK with it, and you should be, too.

When it comes to STIs, people make a lot of assumptions. Most of the time, they're way off base.

People often see STIs as something someone gets as "punishment" for sleeping around. But to Ella, slut-shaming and STI stigma are two sides of the same coin.

"For me, the work I'm doing is so shaped by my feminism and by my personal experience that I don't know how you can talk about STI stigma and herpes stigma without talking about slut-shaming," she says in her video.

In the video, Ella explains a relationship with a guy that quickly turned abusive because of that stigma.

Though he didn't immediately break up with her, he held Ella's herpes diagnosis over her head as a sort of trump card to excuse abusive behavior — and for a while, she says, it worked.

"Whenever he did anything wrong, it came back to, 'But I'm such a great guy because I'm staying with you,'" she adds. Spoiler alert: it turns out he might have been the one to give her herpes, not the other way around.

I wanted to learn how this translates to a wider audience, so I reached out to Ella to chat.

"As much as not everyone gets an STI, emotional abuse is so universal," she told me. "It's terrible and common and so hard to talk about. Especially that gross 'I can't be awful if I did this one moderately decent thing!' A healthy relationship isn't keeping score of positive and negative behavior."

"The only way I'm going to get through this is if I write about it ... if I let it matter to me in ways that are healthy," she said.

It's through her writing and her activism that Ella came to accept herself, which is pretty amazing.

"STIs are so stigmatized, they're seen as a reflection of someone's character, and the public feels entitled to information that they think shows who someone 'really is,'" she said.

"But everyone can get an STI regardless of their lifestyle or their morals, so STIs don't really tell us anything that we have a right to know. At the end of the day, the only people owed that information about someone are their partners and their doctor. I'm this public about my status because I want to be, not because I should have some scarlet 'H' on all my clothes."

For more of Ella's story, check out the full video below.

Sometimes sighted people can easily forget that beauty isn't just something for the eyes to experience. It can be heard, smelled, and touched as well. Nowhere was this more evident than at Anthony and Kelly Anne Ferraro's wedding on October 2.

Anthony is a blind Paralympian and winner of the gold medal in the 2018 USA Judo National Championships for Blind & Visually Impaired. He's also an accomplished guitar player and motivational speaker.

Kelly Ann wanted her husband to experience her in a beautiful dress so instead of having one designed that was pleasing to the eye, she reached out to Loulette Bride to make one that felt amazing to the touch.

"Kelly really wanted to ... make it really special for me," he told Newsweek. "She went above and beyond" to find the wedding dress, which was made "tactilely pleasing" with use of chiffon, lace, silk, and velvet.

From Your Site Articles
Related Articles Around the Web
pets
Get stories worth sharing delivered to your inbox
By signing up you agree to Upworthy's privacy policy.
Trending Stories
officer cleaning up memorial tiktok
Cities