She once called the cops on a fellow parent. Here's why she wishes she hadn't. 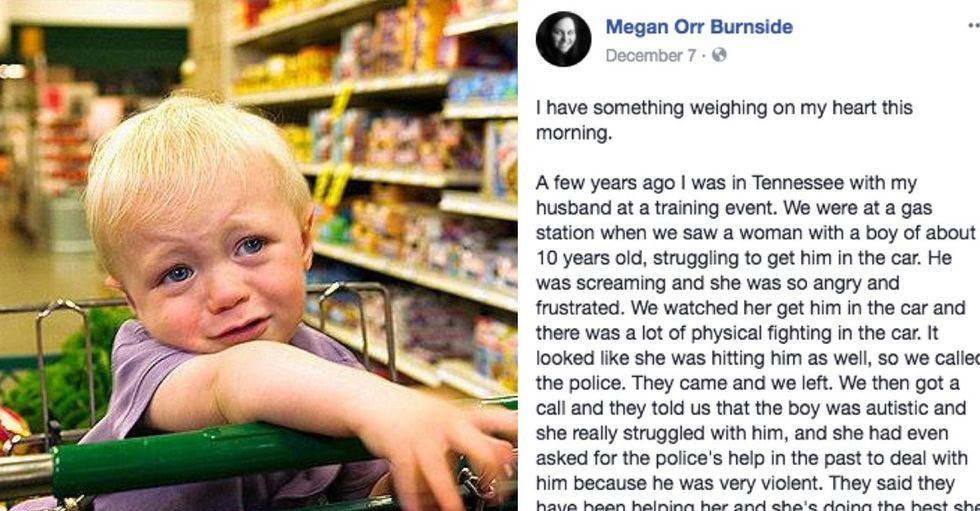 Years ago, Megan Burnside saw a mother physically struggling with her son. The boy was screaming ... so she called the cops.

The mother, it seemed, was trying to get her 10-year-old son back in the car, and it looked like things were getting physical. Concerned for the kid, Burnside decided to call the police. Then she and her husband left.

When the police called her later to update her on the situation, she was horrified: The boy had autism, they told her, and was known to sometimes lash out physically. The mother was just doing her best to calm him down, as she had many times before.

Sadly, stories like this aren't rare. Well-meaning strangers are frequently quick to intervene by calling authorities, which can cause undue stress and trauma for both the child and parent when that person has read the situation wrong. It can even be extraordinarily dangerous for people with disabilities and families of color.

When she realized the situation hadn't been at all what it had seemed, Burnside was racked with guilt. In fact, she still is.

When a similar thing happened to a friend of hers, Burnside decided to share her shameful story on Facebook — and explain how she'd do it all over differently, given the chance.

"This has come up for me today because someone called DCFS (Department of Child and Family Services) on my dear friend," she wrote.

I have something weighing on my heart this morning. A few years ago I was in Tennessee with my husband at a training...

Burnside's friend, whom she called "the kind of mother I want to be like," was bedridden with a respiratory infection, when a person who probably thought they were "helping" called the authorities.

"I don't know what this person observed that they thought was a problem," she wrote. "Maybe her kids were running around without parental supervision? Maybe a parent wasn't feeding them so they were foraging for themselves?"

"I am sad that the person who called her in didn't ask how they could HELP HER," she wrote.

The post went viral and touched thousands and thousands of people who agree with her message.

Concern for the well-being of others is a good thing. But concern without empathy hurts everyone.

She wants to encourage people to reach out and help each other whenever possible, and not to assume the worst of our fellow parents and human beings.

"I really believe that the root of all judgement comes from self-judgement," she says in a Facebook message, noting that she developed more compassion for others by learning to have more compassion for herself and stop worrying about "messing up parenting."

"I think people want to live in a world where we help more and judge less, and all it takes is compassion," she says. "A lot of people have shared how this post will change the way they respond to struggling moms in the future, and I am really encouraged by that."

To be sure, at some point, you may actually witness abuse or neglect, and in those situations it's smart to get the right authorities involved. Burnside just wants to encourage all of us to think — and feel — before we act.