She expected backlash for switching political parties. The opposite happened. 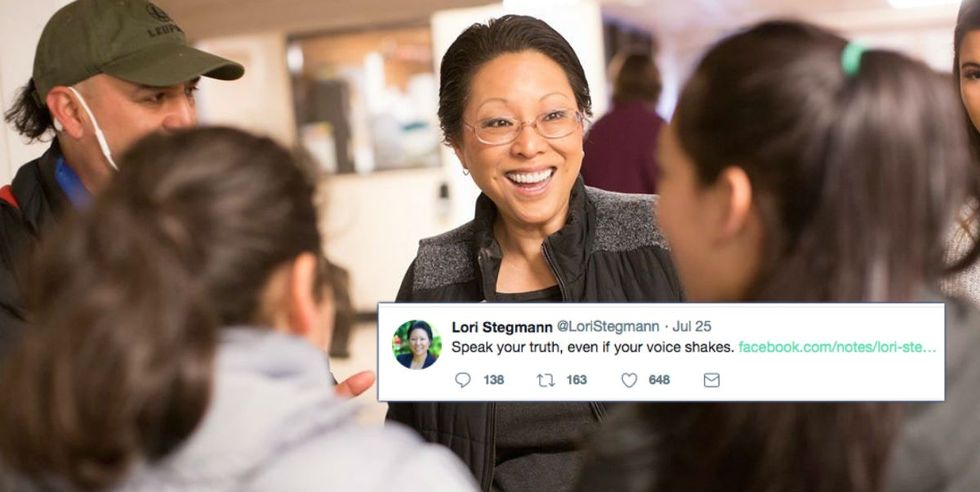 Lori Stegmann is putting values over party — and people are taking notice.

Stegmann is a county commissioner in Oregon, a position that's normally pretty under the radar. But her story has been going viral and becoming a national one since she announced that she is leaving the Republican Party and becoming a Democrat.

"There's too much at stake in our country right now and we have to speak out," she wrote on Facebook.

"As a woman, a business owner, a mother, an immigrant, and a minority," she continued, "I cannot condone the misogyny, the racism, and the unethical and immoral behavior of the current administration. I fear for the safety of our country, for human rights, for women's rights, the environment, and the uncertainty of our future."

Describing herself as a political moderate, Stegmann made it clear it wasn't about attacking Republicans or endorsing Democrats.

It was about finding a home for the values she refuses to give up.

"This decision is about who I am, what I believe in, and my core values," she wrote. "And if you don't stand for something, then you stand for nothing."

Stegmann expected major backlash. But so far, that hasn't happened.

She admitted she expected a lot of negative feedback from her constituents, especially over the fact that she became a Democrat instead of simply leaving the Republican Party.

"I didn't do this to attack, criticize, or belittle my Republican friends," she wrote. "I still consider them my friends and colleagues, and hope that they will do the same. But I know this will be hard for some to hear."

Instead, her Facebook post has received mostly supportive comments. Her story was picked up by major media outlets as yet another example of a career public servant finding themselves forced to choose between party and country.

Stegmann might be taking cues from a growing number of Republicans and conservatives who have recently publicly advocated support for Democrats.

This Republican Congress has proven incapable of fulfilling the Founders’ design that “Ambition must ... counteract… https://t.co/bq1Dp5DQtb
— James Comey (@James Comey)1531878626.0

29 years and nine months ago I registered to vote and became a member of The Republican Party which was founded in… https://t.co/fiVAEyJ4B4
— Steve Schmidt (@Steve Schmidt)1529476862.0

And it's not just about Trump. Even Sen. Ted Cruz (R-Texas) said voters should support the Democratic candidate over a self-identified Nazi Republican running for Congress.

This is horrific. An avowed Nazi running for Congress. To the good people of Illinois, you have two reasonable choi… https://t.co/W3U3vTWxJV
— Ted Cruz (@Ted Cruz)1530301596.0

Real political courage is about standing up for our values in the face of adversity.

America's politics are becoming increasingly tribal. Even good people sometimes find themselves torn between doing what's right and being loyal to their "team."

It doesn't have to be that way.

Stegmann's letter shows there is a way to protest while embracing what's best about us. And it might just be the best way to get our elected leaders to start taking notice.