She checked herself into the hospital so she wouldn't kill herself. It cost her $18,000. 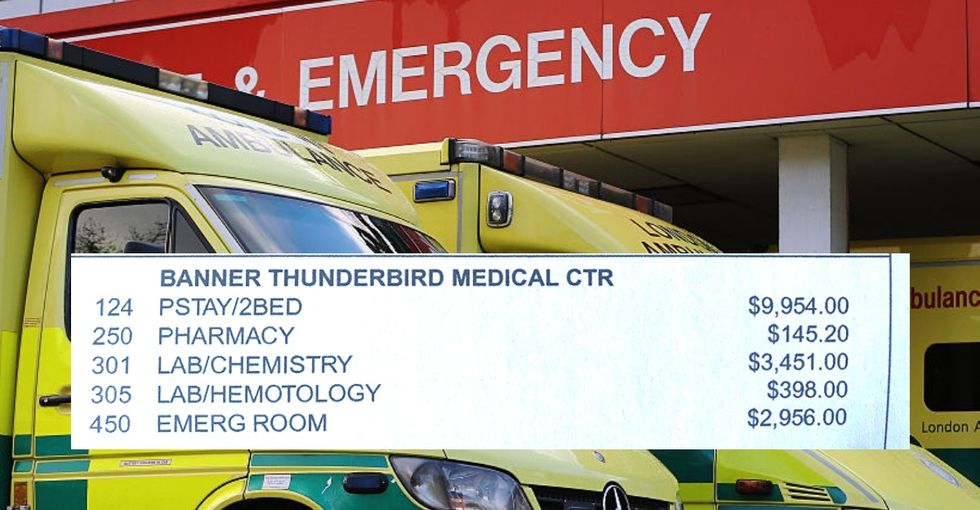 With stories like this one, it's no wonder most Americans support universal healthcare.

Here in the land of the free, getting vital health services is incredibly expensive. We're used to it, kind of. We accept that it's the price we pay for living here, sort of.

We hear legends of far-off, foreign lands like Canada who somehow manage to provide health care for their citizens without any of them dying or going into a lifetime of debt because they can't afford it. We mumble something about wait times and quality of care while we sit in waiting rooms during hospital visits that we know will cost more than our car.

And we debate ideas like Medicare for all, even though the majority of Americans are actually all for it. This story is why.

Nicole Vlaming went to the emergency room because she was on the verge of suicide. It cost her $18,000.

"It's time to go public with this shit," Vlaming wrote on Facebook before launching into her story:

"Two weeks ago today, I walked into the ER because if I didn't I was going to kill myself. I was stripped of all my clothes and possessions, given disposable scrubs and put in a room for the next 5 hours. In the US, this costs nearly $3,000. I was then placed in the behavioral health ward until Sunday at noon. Three nights, two and a half days. Because it was a weekend, all therapy was scaled back, both in number of sessions and the quality of sessions. During one we simply played a trivia game. I sat around watching TV all day and chatting with a Vietnam vet. In the US this costs nearly $10,000. During this stay, I had blood drawn twice. That was another $3,800. Not shown are the "physician charges" that bring my grand total to over $18,000. I saw an MD once and had once daily sessions with a psychiatrist. Those sessions consisted of rating my depression on scale of 1-10 and asking if I want to hurt myself or anyone else. Real stellar care. /s Oh, I almost forgot to point out the $145 for 3 days worth of meds. I normally pay less than $50 for an entire month.

It's time to go public with this shit. Two weeks ago today, I walked into the ER because if I didn't I was going to...

So this woman who sought help because she was in a mental health crisis and a danger to herself received mediocre care for three days and it cost her $18,000.

But her insurance should cover it, right? Isn't that what we have insurance for? Nope.

"My employer sponsored insurance does not cover inpatient mental health care in any capacity," Vlaming wrote. "I do have a supplemental insurance plan that will hopefully cover $6,000, leaving me on the hook for over $12,000."

What the hell, America.

"You want to know why people don't seek help? This is why."

Vlaming's final point is a painful one. We know that we have a mental health crisis in this country. We know that we need more support for people struggling with mental health issues. She did the right thing in that moment. Instead of killing herself, she went to the hospital. That was brave and smart—it should not be financially devastating.

It's a good reminder of what an outlier we are as a nation. The Canadians, Australians, and British folk chiming in on the post with "That visit wouldn't have cost us a thing!" drove that point home. As the only developed nation without universal healthcare coverage, we look really silly trying to tout our greatness, especially in the face of stories like this.

This cannot be that hard. Every other wealthy nation has figured out how to provide healthcare to its citizens. The U.S. spends more on health care than any country in the world, and yet we rank 12th in life expectancy among the 12 wealthiest industrialized nations because our system is so effed up. The irrational fear of Big Bad Taxes has blinded too many of our lawmakers to the embarrassing reality is that we have the worst healthcare model in the developed world.

Come on, America. It's time for universal healthcare. Just imagine how great we could be if all our citizens got the medical care they needed without the side effect of financial ruin.